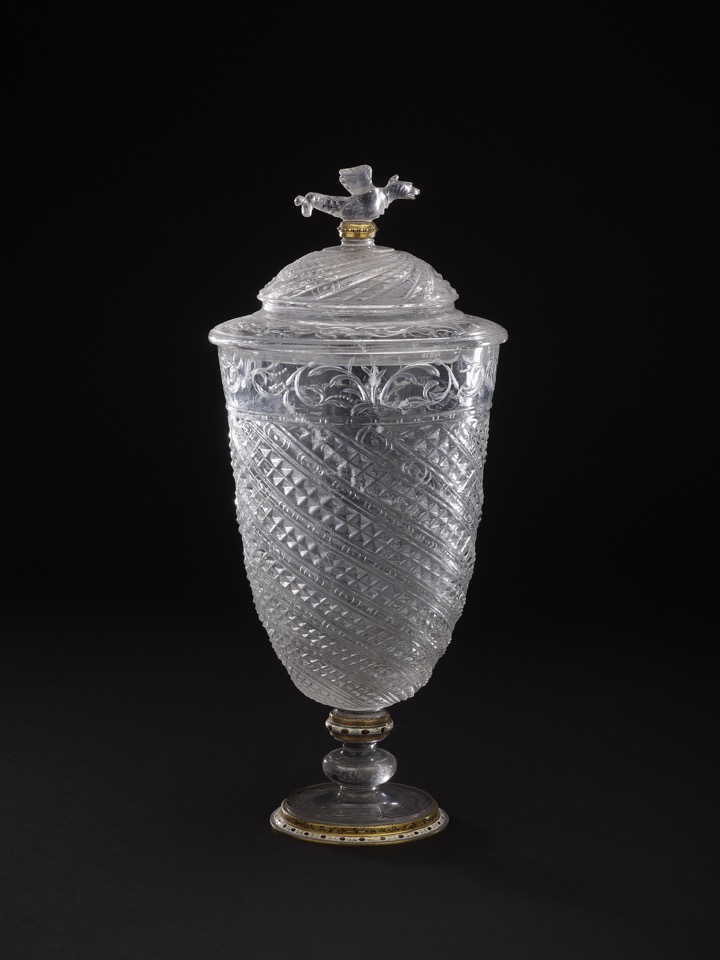 One of a small group of exquisite rock crystal vessels made for the court of Rudolph II of Prague, which combine geometric carving with delicate engraving. Baron Ferdinand acquired this cup from Count Ervín II Nostitz of Prague after an exhibition of his collection in 1891.

Commentary: The general appearance of this piece, particularly the bowl, is very reminiscent of the well-known documented example from the Imperial Prague Schatzkammer of Rudolph II, which has very restrained enamelled gold mounts set with garnets and has been perfectly preserved among the Hapsburg collections, now in the Kunsthistorisches Museum, Vienna (inv. no. 2367); see E. Kris, ‘Meister und Meisterwerke de Steinschneidekunst in der Italienischen Renaissance’, Vienna, 1929, p. 193, no. 657, pl. 199; also R. Distelberger, in ‘Prag um 1600: Kunst und Kultur am Hofe Kaiser Rudolfs II’, Kunsthistorisches Museum, II, Vienna, 1988, p. 237, no. 710, with illus., where its measurements are stated to be H. 20.5 cm, DIAM. 6.3 cm). Furthermore, the surface of the Vienna example is very similarly decorated, though the pyramidal chequer pattern in high relief is not complicated by the introduction of the secondary alternating motif, as on the Waddesdon Bequest covered cup. The Hapsburg example has the same broad, smooth, clear zone immediately below the rim of the bowl and is decorated with similar engraved foliate motifs, albeit in a less dense fashion. However, the stem, which is carved separately from the foot and therefore has two gold mounts (one below and one above), has a very different appearance. This difference is highly significant: firstly, it is decorated with the same pyramidal chequer pattern - on a smaller scale - as the bowl, thereby giving a striking visual unity to this tall bowl and stem. Secondly, the stem, which consists of the one knop, is not in the least squat as on the Waddesdon Bequest example; instead, it is gracefully elongated and tapers inwards towards the bottom of the stem, where a gold mount and garnet collar secure it to the small, almost flat, circular base. As a result, there is a harmony of line and subtle proportion between the three elements that is distinctly absent from the Waddesdon Bequest piece. Hence, doubts have now been raised here for the first time about the origin of the combined foot and stem and the possibility that it may be a replacement, perhaps adapted from another late sixteenth-century rock-crystal. Indeed, the markedly inferior quality of the engraving on the foot is further evidence that the foot does not belong to this covered cap.

This doubt is reinforced by the appearance of a second rock-crystal cup and cover in the Hapsburg collections (Kunsthistorisches Museum, Vienna; inv. no. 1430; H. 25.8 cm; see Kris 1929, p. 193, no. 656, pl. 199). This piece, with its almost identical form, differs in its surface decoration, which consists of only a few lightly engraved feathery fronds among the scatter of 'prunts' in high relief that ornament the sides of the tall bowl and the gently domed cover. Both in its form and in its peculiar form of ornamentation this piece is probably the most deliberate copy of the art of the glassmaker ever to have been produced in rock-crystal. However, it serves to strengthen the view that the other Hapsburg covered cup (with its pyramidal chequer pattern in high relief) is equally influenced by the glassmaker's art of around 1600. The form and surface ornamentation can be compared with mould-blown Venetian glass covered goblets of that period, such as the Slade Collection's aubergine example with each lozenge of its moulded chequer pattern containing a pyramidal diamond-shaped boss, both on the bowl and, less distinctly, on the cover (British Museum; inv. no. s. 740; H. (with cover) 31.7 cm; DIAM. of rim of bowl 10 cm; Hugh Tait, ‘The Golden Age of Venetian Glass’, British Museum, 1979, p. 111, no. 182 with illus.). Significantly, the clear glass knop, with its projecting merese separating it from the flat foot, is the exact parallel to the rock-crystal versions. Similarly, the two dated clear glass specimens (without covers) of identical form, which are enamelled with two different German coats of arms and the dates 1606 and 1607 respectively, are thought to have been made by Venetian glassmakers working at Hall in the Tyrol (near Innsbruck), where a glasshouse established in 1534 strove to make ‘façon de Venise’ glasses under Hapsburg patronage (British Museum, reg. no. 1894,0804,2-3; see Tait 1979, p. 44, nos 45-6, with illus., where the measurements are stated to be H. 25.2 cm; DIAM. 10.6 cm and 10.8 cm respectively). Again, the two knops forming the stems are elongated and taper inwards towards the bottom, where a merese in each case separates the stem from the foot - just as the discreet, gold collar-mounts on the two rock-crystal versions in Vienna serve to separate visually and unite physically these elements. Consequently, as this aesthetic feature is now lacking on the Waddesdon Bequest rock-crystal covered cup, it is very possible that it was originally taller, with an elongated knop of the kind that has survived on the two versions in Vienna. Furthermore, although neither of the covers on the pieces in Vienna is as highly domed as the cover on the London cup, the latter is more complex in design. It has a narrow concave moulding that gives it both an unusual profile and, at the same time, an unexpected harmony with the large bowl beneath. Therefore, only the combined stem and foot (together with the foot-rim mount) seem at variance with the rest of this piece, and so most probably the original stem and foot have been lost.

Finally, there is the question of the source of the far more sophisticated spiral pattern of decoration on the London bowl and cover, in which the pyramidal chequer bands are separated from each other by a narrower band (in the form of a slightly convex band with a dot motif framed by two curving lines in parallel on either side). Again, the inspiration seems to have been the Venetian glassmaker's virtuosity in creating a dense spiral effect with vetro a retorti (a glass in which are embedded canes composed of twisted opaque white threads forming a variety of patterns) and, simultaneously, a pyramidal chequer pattern by blowing the vetro a retorti into an appropriate mould. Among the rare glass vessels of this type from Renaissance Venice are two ewers, both being the same height (27.5 cm) and neither having even the smallest area of undecorated clear glass (British Museum, reg. no. 1869,0624,44-45; see Tait 1979, p. 102, nos 158-9, with illus.). Although the patterns of the vetro a retorti are not the same, the two ewers both create a similar visual effect; and in alternating the wide band of finely twisted threads with a narrow band of solid white the glassmaker has provided the carver of the Waddesdon Bequest rock-crystal with a prototype, especially on the sides of the body where it is combined with the pyramidal chequer motif in high relief.

Consequently, the attribution of this rock-crystal covered cup to a Milanese workshop, influenced by Venice, or to a Prague Court workshop, where Italian masters like Ottavio Miseroni might have introduced this daunting challenge, seems highly probable, especially around 1600. It is interesting to compare it with the compact ovoid vase of smoky topaz (on a short stem and small foot with gold mounts) that is almost entirely carved with a pyramidal chequer design in high relief and was first described in the 1680 Inventory of Queen Sophie Amalie of Denmark (1628-85) and has since remained in the Danish Royal Kunstkammer (Rosenborg, Copenhagen, inv. no. 5. 228; H. 9.8cm; see R. Distelberger, Beobachtungen zu den Steinsechneiderwerkstätten der Miseroni in Mailand und Prag, ‘Jahrbuch der Kunsthistorischen Sammlungen in Wien’ vol. 74, 1978, pp. 146, 151-2; J. Hein, Versteinertes Eis. Gefässe aus Bergkristall und Halbedelsteinen des Grunen Kabinetts in Schloss Rosenberg, ‘Kunst und Antiquitäten’, I, 1985, p. 40, fig. 9; ‘Sophie Amalie, 1628-85, Den onde dronning’ exh. cat., Rosenborg, 1986, no. 168, with illus.; ‘Christian IV and Europe’, The 19th Art Exhibition of the Council of Europe, Copenhagen, 1988, pp. 181-2, no. 651, with illus., where it is attributed to Ottavio Miseroni (employed 1588-1624 in Prague) and is dated “circa 1620”). Although the shape of the Rosenborg example is not influenced by Venetian glass forms, its technical similarities with the London piece are striking, despite the vast differences in scale; however, it is interesting to note that by about 1620 Ottavio Miseroni would seem to have abandoned the plain, almost flat, circular base in favour of a pyramidal chequer pattern in high relief on the foot itself, thereby exactly matching the body of the topaz vessel. In almost all respects this Rosenborg topaz vase is highly original and, similarly, the various unparallelled features of the Waddesdon Bequest rock-crystal cup and cover may be due to the creative qualities of the Miseroni workshop in Prague early in the seventeenth century.