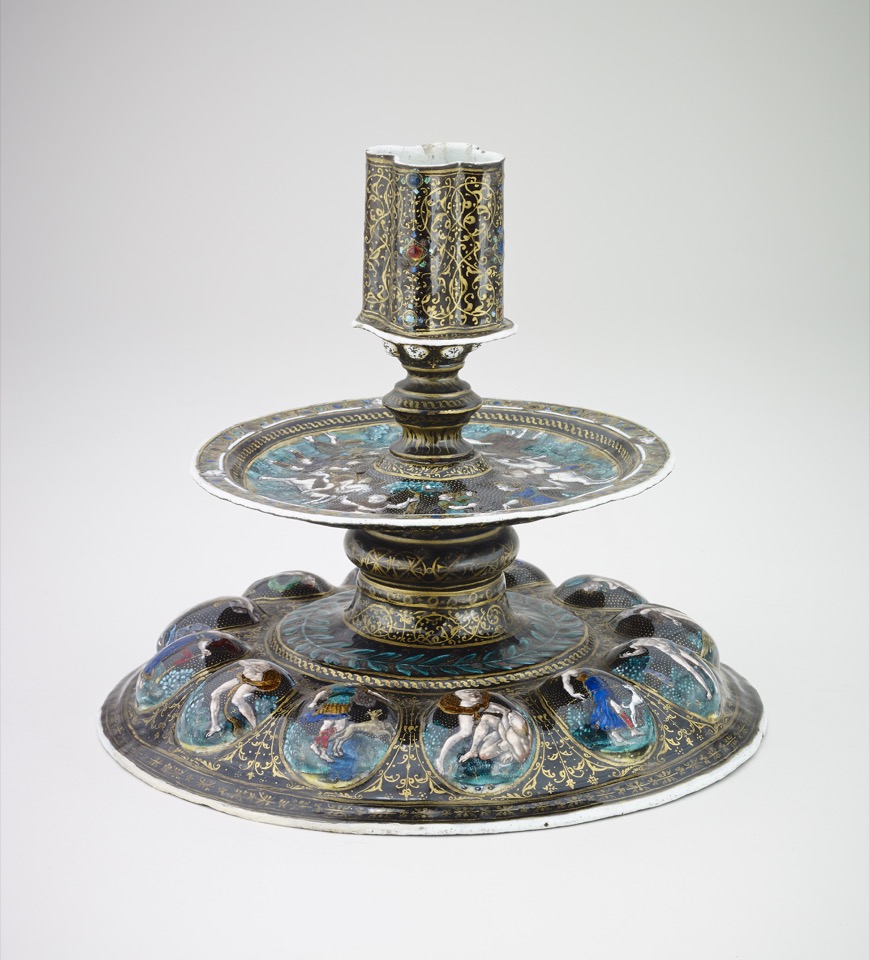 The bosses on the feet are painted with the Labours of Hercules, gods and goddesses, horsemen and musicians. The richness of the decoration, with coloured metal foils and gilding, gives a jewelled effect, making these attractive collectors’ pieces.

Painted Limoges enamel candlestick; copper; holder, large pan and base decorated with twelve oval bosses; on pan: a triumphal procession, with bearded man in armour and woman dressed like Diana in a chariot; two horses ahead led by a woman; behind chariot a train of musicians and dancers; foot: bosses appear to show: Mars, Hercules and Antaeus;Mercury with caduceus and cock, Hercules and the Lernean Hydra; Apollo with his lyre, Hercules and Deianira, Juno, Ceres with thunderbolt, Hercules with the globe on his shoulders, Bacchus with grapes, Hercules and Nessus, the rape of Hippolyta, Hercules and hind of Ceryneia as a stag. Painted in semi-opaque enamels over a white preparation, translucent enamels over coloured foils and grisaille of grey-white with pink flesh tones; details in enlevage and gilding; all on black ground, powdered minutely with gilding.

This object was previously owned by Samuel Addington and P Soltykoff, collected by Anselm von Rothschild and bequeathed to the British Museum by Ferdinand Anselm Rothschild.

Provenance: Probably from Soltykoff Collection sold in Paris, 8th April 1861 lot 514 for 29,900 francs, and by 1862 owned by Samuel Addington who exhibited them that year at the South Kensington Museum. Subsequently acquired by Baron Anselm von Rothschild, Vienna, between 1866 and 1872 (cat no. 479), by inheritance to his son Baron Ferdinand Rothschild (d. 1898).

Commentary: The form of the candlesticks is unusual and the closest comparison is a pair of candlesticks also attributed to Jean de Court, formerly in the collection of Mr and Mrs Germain Seligman, now in the National Gallery of Canada (inv. no. 23409-1-2). These have a similar bulbous base and also the same shaped top as the British Museum examples, but with an urn-shaped element forming the bottom part of the stem. Other partial comparisons are a pair of candlesticks depicting the Labours of Hercules in the Louvre (MR 2504 & 2505, unattributed), a similar pair to these in the Metropolitan Museum (inv. no. 39.66.1, unattributed), and a pair in the Rijksmuseum (inv. no. BK-17219-B, circle of Jean de Court). Two examples exist in the Walters Art Gallery with a similar top to the British Museum pair, but on a much longer and straighter stem, and without the bulbous base (inv. nos. 44.51 & 44.52 attributed to Jacques Laudin I, and 44.354 & 44.355 attributed to Joseph Limosin).