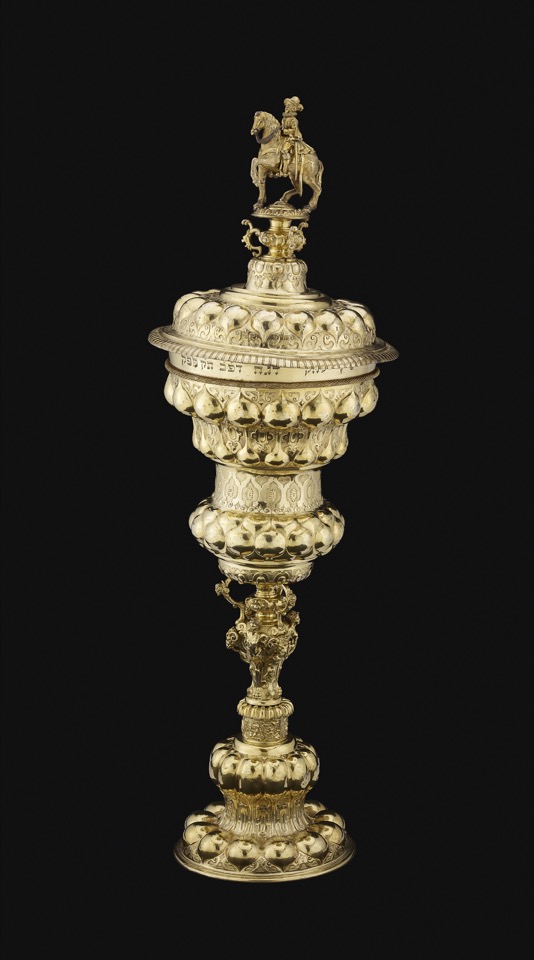 The Pressburg Cup is engraved around the lip with a Hebrew inscription, which records its ownership by the Burial Society of the Jewish community in Pressburg (modern Bratislava) in 1739–40. It is among the earliest silver cups known to have been used for this purpose. It is a rare piece of Judaica, collected by a family which has continued to maintain its Jewish identity.

This object was previously owned by Holy Fraternity of Charitable Works, collected by Anselm von Rothschild and bequeathed to the British Museum by Ferdinand Anselm Rothschild.

Marks: The two marks (the town-mark and the maker's punch-mark) occur: on the cover, the lip of the bowl and again on the foot-rim.

Provenance: Baron Anselm von Rothschild, Vienna, before 1866 (cat. no. 227), by inheritance to his son Baron Ferdinand Rothschild (d. 1898). In 1740, the property of a Jewish fraternity in Pressburg.

Commentary: According to the Hebrew inscription on the lip of the bowl, this purely secular piece of Renaissance silver plate had become in 1740 the property of a Jewish Fraternity of Charitable Works in Pressburg, the old German name for present-day Bratislava, the capital of Slovakia and one of the principal towns of Czechoslovakia. In the later Middle Ages it was called Pozsony and was the foremost cultural centre in Hungary; here, in 1465, the first Hungarian university was established. With the domination by the Hapsburgs, the city continued from 1563 to 1830 to be the place where the coronation of the kings of Hungary took place in the Cathedral of St Martin. The history of this standing-cup and cover, as recorded in the Hebrew inscription, is not in the least improbable, but whether the simple patches were inserted inside the cover at this time cannot be proved, though it seems most likely.

Hans Petzolt's career and importance as an innovator has been discussed in WB.103, but this standing-cup and cover illustrates another aspect of his so-called ‘Neugotik’ or, more correctly, his Dürer revival style. Here, he has retained the traditional Nuremberg Renaissance form with its vertical axis and strong horizontal divisions, even the bowl has a waisted cylindrical zone in the middle - as exemplified in the Waddesdon Bequest by three pieces, the Tucher cups (WB.101) and the Apollo cup (WB.108) - but he has transformed the appearance by introducing soft flowing contours in the Gothic manner in place of rigid horizontal bands. This curvilinear quality is combined with the use of strongly protruding lobes - a feature of the German late Gothic style, popularised around 1507 in Nuremberg itself by Albrecht Dürer (see H. Kohlhaussen, ‘Nürnberger Goldschmiedekunst des Mittelalters und der Dürerzeit 1240-1540’, Berlin, 1968, p. 276, fig. 405; also‘Wenzel Jamnitzer und die Nürnberger Goldschmiedekunst 1500-1700’, exh. cat., Germanisches Nationalmuseum, Nuremberg, 1985, p. 127, fig. 97) and still being used by Dürer in a drawing for a double standing-cup dated 1526 preserved in the Albertina, Vienna (see J. F. Hayward, ‘Virtuoso Goldsmiths and the Triumphs of Mannerism 1540-1620’, Sotheby Parke Bernet Publications, London, 1976, p. 340, pl. 30).

A smaller version of this Pressburg cup can be seen in Nuremberg on loan from a private collection to the Germanisches Nationalmuseum: it is the Kress standing-cup (H. 35.3 cm) that Hans Petzolt evidently made for the Nuremberg patrician family of that name c. 1600, for on the cover the finial figure of a Landsknecht holds a shield with the arms of Kress (see ‘Wenzel Jamnitzer’ 1985, p. 253, no. 70, with illus.). Not only does it have a very similar foot and cast stem, but the decoration on the bowl and cover is a scaled-down version of the Pressburg cup, lacking the full ‘Traubenpokal’ effect below the waisted middle zone and having only one of the two tiers in the zone above. Furthermore, the engraved and chased ornament on the waisted zone of the Kress cup is no more than a subtle variation of the formal design on the two-tier zone of the Pressburg cup; consequently the overall appearance is very close, but modified to suit the smaller size of the Kress cup.

The very tall cups by Hans Petzolt, such as the Fortunapokal in Munich (H. 62 cm), the Dianapokal in Berlin (H. 79.5 cm) and the strange Amorpokal in Hamburg (H. 73.7 cm), are all surmounted by an elegant standing figure, thereby emphasising the vertical axis, exaggerating the soaring quality and conforming to Nuremberg's fashionable neo-Gothic (or Dürer revival) approach. By contrast, the equestrian group on the cover of the Pressburg cup is not so successful, although it is harmoniously in scale and forms an effective silhouette when seen in profile. Nevertheless, it seems so unlike much of the work of Hans Petzolt that the question of whether it is original has to be considered. In fact, it is a very fine group of the late sixteenth century - apparently intended as a portrait of a famous contemporary leader - but executed in a different manner from Hans Petzolt's usual small-scale sculptures. Furthermore, its crude method of attachment to the top of the baluster finial, destroying part of the decoration on the roundel, demonstrates that it could not have been intended originally for that position. On the other hand, the unused holes in the centre of that roundel (above the baluster finial) suggest that a different figure might once have stood at that point. If the alteration had been carried out in the first half of the nineteenth century, with the intention of impressing a rich collector like Baron Anselm von Rothschild, then the workmanship might be expected to be of a very much higher standard - as in the case of the Johann Moritz von Nassau-Siegen ewer and basin (WB.91-92). In the latter case, the alterations have been so skilfully 'harmonised' with the surrounding embossed areas that they virtually defy detection. The simple nuts and screws on the Pressburg cup, together with the broken leg of the horse itself, indicate that these changes were not carried out by one of the extremely competent craftsmen whose services were readily available to the top dealers in the nineteenth century.

Finally, the choice of a portrait equestrian figure of such a highly individual character is in itself a remarkable phenomenon. To find such a piece would not be an easy matter, but to find by chance an equestrian group that could be accommodated on that tiny roundel (above the baluster finial) would be a truly remarkable coincidence. Indeed, the very idea of placing a large and rather inelegant equestrian figure group of a contemporary leader on top of one of Hans Petzolt's tall cups would have been a remarkable departure from modern practice, for it is well known that many of the elegant standing figures forming finials on these cups are not original but are nineteenth-century 'improvements' (see Ernst-Ludwig Richter, ‘Altes Silber: Imiliert - Kopiert – Gefälscht’, Munich, 1983). Proof exists that one other leading Nuremberg goldsmith - a serious rival of Hans Petzolt - was making a splendidly embossed tall cup (H. 86.7 cm) with an equestrian figure group as a finial in 1604; it is the famous Martins-Willkomm der St Georgen-Brüderschaft in Elbing (preserved since 1972 in the Altonaer Museum Norddeutsches Landesmuseum, Hamburg-Altona; see ‘Wenzel Jamnitzer’ 1985, pp. 261-2, no. 86, illus., with a detail of the finial figure group of St Martin on horseback dividing his cloak for the beggar on the ground beside the left flank of the horse). The Martins-Willkomm is a brilliant tour de force, the work of Hans Beutmüller (master 1588, died 1622), and in its general outline and form it is very similar to the Pressburg cup. Especially relevant and striking are the parallels in design between the two covers: both have the same knorret decoration and, in the centre, the steep, almost mushrooming, flattened dome on which is placed a baluster finial with protruding scrolling-brackets, above which is the roundel on which the equestrian group stands. It is at this point that differences occur, for the method of fixing the St Martin and Beggar group requires no ugly rivets or screws, because the base on which the figure group stands is attached like a cap to the roundel. It is difficult to see how the Pressburg cup equestrian group could ever have been similarly attached unless the present finial originally continued to rise to a further stage (now lost), which then acted as a platform for the rider and his horse.

No completely satisfactory explanation seems to fit the visual evidence, though the most likely favours an early date for this ugly repair - and hence the survival of a unique ‘equestrian-pokal’ by Hans Petzolt.