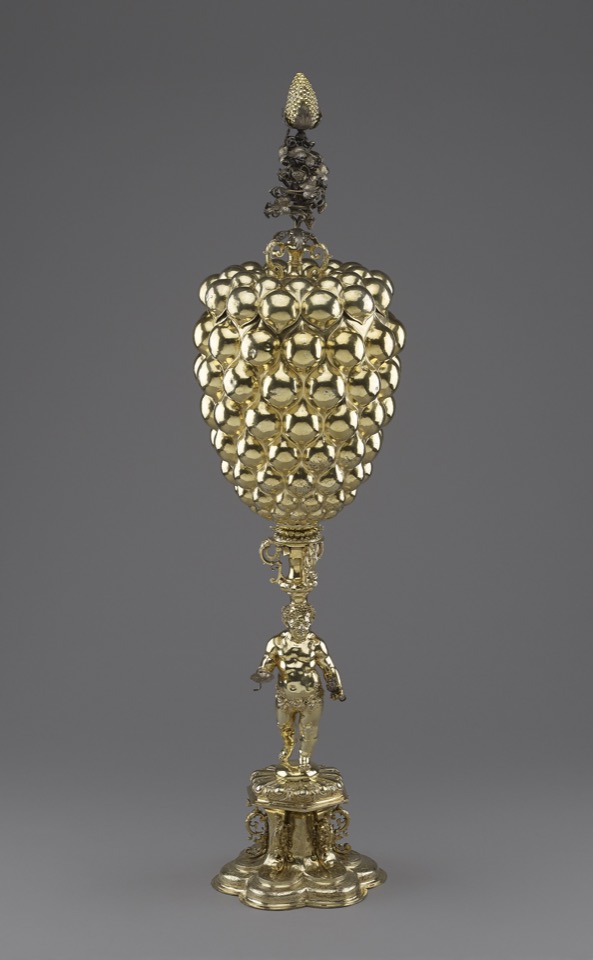 Marks: The two marks (the town-mark and the maker's punch-mark) occur once on the lip of the bowl and once on the cover (in the centre beneath the baluster-finial).

Commentary: Hans Petzolt (1551-1633) is one of the most famous of the Nuremberg goldsmiths, overshadowed perhaps only by Wenzel Jamnitzer, whose mastery of sculptural effects in silver plate he brilliantly emulated and at times almost surpassed. Petzolt was born in St Joachimsthal, a town in the Erzgebirge, but his youthful formative years seem to be completely undocumented. When he was twenty-seven years old, in 1578, the City Council admitted him to the guild as master, having raised objections to his admission in the previous year. He clearly succeeded in establishing a very special relationship with the Council, because he received a regular supply of orders for the spectacular, tall presentation cups that the Council frequently gave to visiting dignitaries and honoured citizens as part of their formal ceremonies, and in the twenty years between 1595 and 1615 at least eighty-four such items were sold by him to the Council. During this time he was invited to Prague by the Emperor Rudolph II to work on a silver fountain - perhaps finishing the famous one supplied by Wenzel Jamnitzer in 1578. He was asked to return to Prague in 1616 by the Emperor Matthias. The size of the payments he received from the Imperial Court during these ten years indicates the grand scale of these prestigious commissions, though none of the details have survived.

His workshop must have been extensive because, despite the heavy losses of Renaissance silver plate, it has been calculated that there may be as many as forty of his marked pieces still in existence. No doubt presentation cups tended to enter illustrious family treasuries, and often there was neither the financial need nor the question of changing fashion to cause these family heirlooms to be melted down - unlike so much standard rich domestic silver which was either periodically refashioned or converted into coinage. In 1610, among the silver cups purchased by the Nuremberg City Council were some 'in Form eines Weintraubens' and perhaps the best-known example in Germany of Petzolt's cups in this form is the extraordinary Elbing City Treasure Cup (now in the Kunstgewerbemuseum, Berlin; see Klaus Pechstein, ‘Goldschmiedewerke der Renaissance: Kataloge des Kunstgewerbemuseums Berlin, Band V’, Berlin, 1971, no. 106, with bibl.). This tall cup (H. 50 cm) has a stem formed by the figure of the crowned Emperor in armour, with a banner (in his right hand) and a shield resting on the ground (in his left hand); the cover, which again is an integral part of the 'bunch of grapes' bowl, has a corresponding subject as a finial - the figure of a crowned lion rampant holding a shield. The base, on which the Emperor is standing, is lower and wholly neo-Gothic in style. The cup, probably made before 1603, is now immensely impressive, though the idea of supporting the 'bunch of grapes' bowl and cover on a caryatid figure composed of the statuette of the Emperor might seem to show a rather curious disregard for the normal conventions of design, especially as the Emperor's head is lost beneath the openwork neo-Gothic foliage in the zone above.

Indeed, a possible explanation may be found in Petzolt's obvious temptation to repeat himself when faced with the pressure of an increasing number of prestigious commissions and an understandable desire to keep his rivals at bay. Petzolt's design of the Waddesdon version with a vigorously modelled, mature figure of Dionysus, or Bacchus as he was known to the Romans, is perhaps the ideal solution, for the cup is not only in the form of a bunch of grapes but is also thematically united by this use of the classical God of Wine. Although not yet finally proved, the ‘Traubenpokal’ appears to have been the invention of Hans Petzolt, since none of the examples by his contemporaries can be dated earlier - nor, indeed, linked to any specific documentation that might indicate that degree of originality.

Perhaps the most serious rival, however, is Hans Kellner of Nuremberg (master 1582, died 1609), whose version of the ‘Traubenpokal’ also had a stem composed of the caryatid figure of Bacchus (7.5 in high) - but a tall, young, Adonis type of Bacchus, standing next to a tree-stump on a rocky mound, with two frogs and the diminutive figure of Pan (on the right-hand side). This important piece, formerly in the Rothschild collection at 148 Piccadilly, London, and sold by order of Victor Rothschild in 1937 (Sotheby's, 28 April, lot 226, pl. XL), had been in Russia during the eighteenth century, for it also bears the tax mark of St Petersburg for 1735-6. It is now in The Walters Art Gallery, Baltimore, USA, having come from the William Randolph Hearst Collection (see Ann Gabhart, ‘Treasures and Rarities’, Baltimore, 1971, pp. 24-5, illus. with detail of the Bacchus caryatid figure, shown holding a lobed wine-cup on a stem and foot- perhaps original?). Despite the more anecdotal treatment of the stem, Hans Kellner's undoubtedly accomplished figure of the adolescent, almost effeminate, Bacchus contrasts with the greater realism and monumentality of Petzolt's interpretation of the ageing Bacchus, so reminiscent of Dionysus's tutor and drunken companion, Silenus.

Kellner's great skill in handling complicated freestanding sculptural groups is demonstrated by a superbly modelled table-centre in the form of St George slaying the Dragon, preserved in the Elector of Saxony's Schatzkammer, in the Grünes Gewölbe, Dresden. As so often with these spectacular items of Renaissance plate, the figures of this group could also be used as drinking vessels with detachable heads. His exceptional qualities were equally appreciated by the patrician families of Nuremberg, and his brilliantly designed and cast silver mounts for the Tucher family ‘Geschlechterbuch’ (family record) were completed in 1592; they are now on loan from the Tucher family and exhibited in the Stadtgeschichtliches Museum, Tucherschlösschen, in Nuremberg (see‘Wenzel Jamnitzer und die Nürnberger Goldschmiedekunst 1500-1700’, exh. cat., Germanisches Nationalmuseum, Nuremberg, 1985, pp. 257-8, no. 80).

More usually, the early extant examples of the ‘Traubenpokal’ have a stem formed of the trunk of a tree, sometimes with a vine entwined around it, with a bird or a little boy in it (for three examples, two of which were lent from the Graf-Luxburg-Museum, Aschach, see Catalogue, ‘Prunkstücke Deulscher Weinkutlur’, Mainfrankisches Museum, Würzburg, 1957, pp. 33-4, nos 4, 6 and 11, illus.; no. 4 by Nicolaus Jung (master 1595, died 1609) belongs to the Bayerisches Nationalmuseum, Munich, and is particularly interesting because it can be closely dated c. 1600). The stem of the Nuremberg marked - but less precisely dated - example in the Moscow Kremlin (see G. A. Markowa, ‘Deutsche Silberkunst des XVI-XVIII jahrh, in der Rüstkammer des Moskauer Kreml’, Moscow, 1975, no. 31, col. pl.) combines a male figure (dressed in contemporary costume and wearing a hat) as the support for a tree-trunk, which is attached to his back, and at the top end carries the bowl of the cup in the form of a bunch of grapes. A very similar effect was achieved on a ‘Traubenpokal’ in the Grünes Gewölbe, Dresden, which bears the mark of the Nuremberg goldsmith Paulus Baier (master 1613, died 1659); he has introduced the figure of a grapepicker with a huge bin strapped on his back and supporting a tree-trunk. These charming, but rather more trivial, variations of the ‘Traubenpokal’ rarely seem well designed, and always lack that monumentality and truly sculptural quality that distinguishes Hans Petzolt's best work.

For that reason, reference should be made to the truly remarkable Diana ‘Traubenpokal’ that has survived in the Kremlin in Moscow since 1644, when it was acquired from the King of Denmark's collection. The silver-gilt bunch of grapes bowl and cover are supported by a graceful silver nude caryatid figure of Diana the huntress, holding a large bow in her left hand (see J. I. Smirnowa and B. Heitmann, ‘Gold und Silber aus dem Moskauer Kreml: Meisterwerke Hamburger Goldschmiedekunst’ Museum für Kunst und Gewerbe, Hamburg, 1986, p. 108, no. 17, col. pl. on p. 14). It is the work of a Hamburg goldsmith, Carsten Mundt I, and was executed between 1628 and 1643. Significantly, the Diana figure stands on a simple, plain silver drum-shaped pedestal - almost gauche in its design and execution - and, below, the high, silver-gilt pedestal foot is embossed in the typical fashionable neo-Gothic (or Dürer revival) taste of Nuremberg in the early seventeenth century. The influence of Hans Petzolt's Nuremberg workshop spread rapidly to other centres, especially in the north, but because of the enormous destruction of silver plate it is rare to be able to demonstrate the links so vividly and precisely.

The hexagonal pedestal foot on the Waddesdon ‘Traubenpokal’ has several puzzling features that may not be consistent with an early seventeenth-century date. However, the hexagonal form of the high pedestal is also to be found on Hans Kellner's Bacchus ‘Traubenpokal’ (in The Walters Art Gallery, Baltimore), which must predate his death in 1609, although it too exhibits some decorative and technical details that may indicate that the pedestal foot is no longer in its original state. The general form of Petzolt's high pedestal on the Waddesdon cup should therefore be compared with the one in a drawing of a significantly similar caryatid figure of St Christopher carrying the Christ Child (in the Heroz Anton Ulrich-Museum, Brunswick, inv. no. 2WB IV 44; see ‘Wenzel Jamnitzer’ 1985, p. 355, no. 323, where it is attributed to Christoph Jamnitzer (master 1592, died 1618) and is dated “um 1590”). Both are hexagonal with a slightly concave profile, attached projecting scrolling-brackets, and, finally, a gently spreading lobed foot that forms a sexfoil outline at the rim. Another hexagonal high pedestal, but without the subtle concave profile and lobed foot-rim, can be seen on the ‘Traubenpokal’ (H. 32 cm) lent by the Nuremberg City Council to the Germanisches Nationalmuseum (see ‘Wenzel Jamnitzer’ 1985, p. 269, no. 96); it is the work of the Nuremberg goldsmith Georg Rühl (master 1598, died 1625). The fashion for this new type of high hexagonal pedestal foot seems to be documented in Nuremberg in the very early seventeenth century. However, the distinctive type of radiating lobed and foliate ornament on the upper surface of the Waddesdon Bequest pedestal is not difficult to parallel in contemporary silver. Furthermore, the six projecting scrolling-brackets and the engraved decoration are typical of the over-ornate revivalism of the mid-nineteenth century, and the view of the interior of the pedestal foot provides ample confirmation of the modern technical features employed by the goldsmith who embellished the pedestal as it is presently constituted.

The serious doubts cast on the engraved decoration of this hexagonal foot must also extend to the boss inside the cover of this ‘Traubenpokal’. The cover was undoubtedly made with a small hole at the centre for the attachment of a finial, and the evidence of the assay scraping and the pair of marks (the town punch-mark and the maker's mark) are consistent with the hole having remained unaltered in the intervening period. There is little doubt that there would have been a disc or small roundel on the inside to help secure the finial in place, but it is unlikely to have been as large as the present domed boss, which covers much of the embossed central area. Furthermore the quality of the engraving, especially the technique of depicting the left foot of Bacchus thrusting forward in a realistically distorted and magnified form, seems inconsistent with the workshop practice of Hans Petzolt and his contemporaries in Nuremberg.

Finally, it should be noted that in the nineteenth and early twentieth century the ‘Traubenpokal’ was always described in German as an ‘Ananaspokal’, and in English as a pineapple cup or even as a pine-cone cup. Both of these terms are not infrequently used even today, but there is no justification for perpetuating the misnomers.