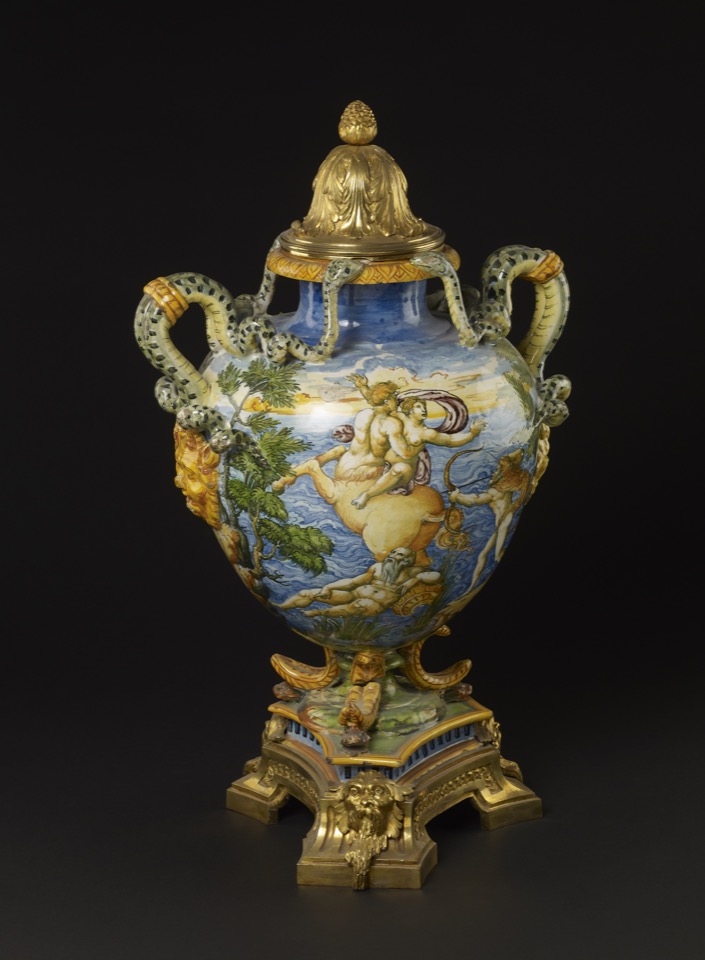 One shows river gods in a landscape. Hercules and Deianira appear on the other. One is signed for a famous ceramic workshop in Urbino whose wares were hunted down by collectors. As mounted ceramics, these were star pieces for Horace Walpole at Strawberry Hill in the 1760s and later for Baron Ferdinand at Waddesdon Manor.

Large vase of oval form; on the shoulders two double-serpent handles. Earthenware covered inside and out with a presumed tin-glaze; painted on one side Hercules and Deianeira canoodling; with gilt-metal mounts effectively identical to those on WADD 61a.

This object was previously owned by Morley, Montague Parker and Horace Walpole, and collected and bequeathed to the British Museum by Ferdinand Anselm Rothschild.

London / The British Museum / Room 2A / Case 3a 11 Case 3b 13
This object sits in the centre of two cases, visible from both sides.

Commentary: From Thornton & Wilson 2009 - 'This jar and its companion [WB.61.a], described in Horace Walpole's accounts as "two large vases of Roman faience mounted in ormolu", were bought by him in Paris in 1765-6. The ormolu mounts and lids were probably added in Paris not long before this and show that they were envisaged purely as ornamental. Similar ormolu mounts were applied in the same period to Sèvres porcelain vases. Originally jars of similar form were mainly supplied for pharmacy use, but grand examples like this were already decorative as well as functional in the 16th century. In Ferdinand Rothschild's Smoking Room at Waddesdon the jars were given prominence, set on columns on either side of the Limoges painted enamel of the "Quos Ego" [WB.21]. The form and painting are similar to several of the earliest group of jars in the pharmacy of the S.Casa at Loreto; but this exact form does not occur at Loreto. After 1544, Orazio Fontana's activities are uncertain. In 1560 he is documented in Urbino. In 1564 he was working in Turin for the Duke of Savoy and was described as "His Highness' chief potter" ("capo mastro de vasari de Sua Altezza"). The following year he was back in Urbino, setting up his own separate business after an apparent dispute with his father. It may have been both Orazio and Antonio Patanazzi who launched, around 1560, the fashion for white-ground grotesques, which became a successful speciality of the workshops of both families. Orazio died in 1571 and his workshop was taken over by his nephew Flaminio, before, apparently, passing to the control of Orazio's relative and collaborator Antonio Patanazzi. There are a few pieces recorded, both "istoriato" and grotesque-painted, marked as made in the workshop of Orazio. Among these are an "istoriato" jar similar in form to the BM ones, which was once in the collection of Alexander Barker, and is described as inscribed "FATTO IN BOTEGA DE M ORATO FONTANA", and another, of different shape with the plinth marked "FATO IN BOTEGA D MESTERO ORATIO FONTANA IN ORBINO". It is sometimes supposed that these must have been made after he separated his business from that of his father, that is, between 1565 and 1571. This may be right, but cannot be regarded as certain: for example, there seems no reason that he could not have marked pieces made in Turin in 1564 with his name (though the last-mentioned jar is also marked as made in Urbino). TL anaylsis in the BM in 1974 indicated that the plinths, as well as the bodies of the jars, are of Renaissance date. A similar but unmarked jar is in the Frizzi Baccioni collection.'