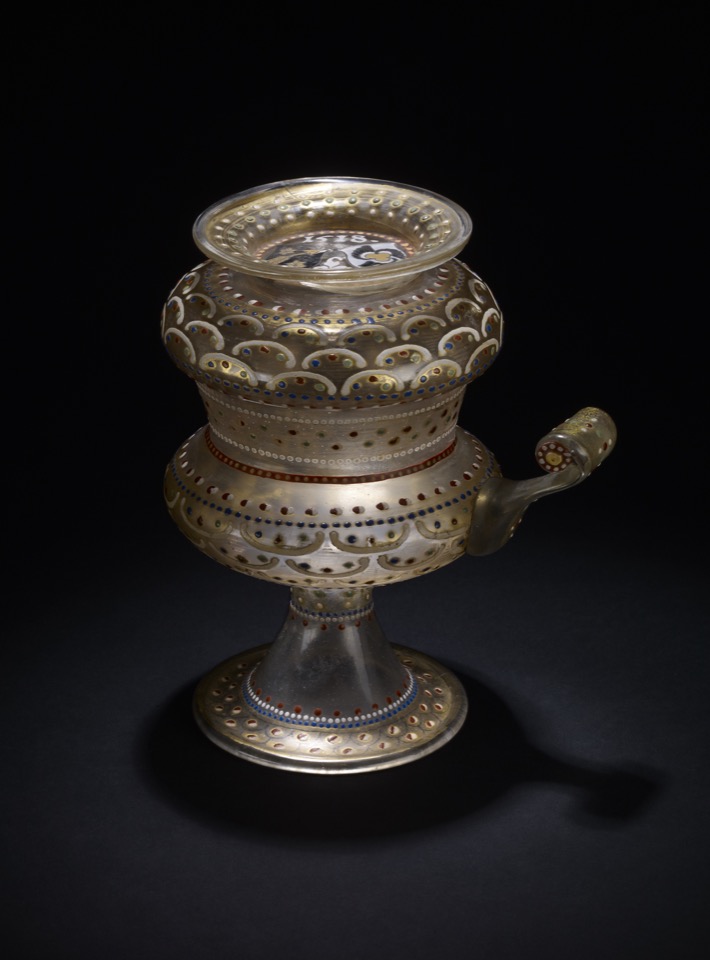 A forgery with the arms of Scharff of Nuremberg and Hörlin of Augsberg and the date 1518.

Cup and cover of enamelled glass; thistle-shaped bowl imitating form of German mazer bowl; cup has flattened globular body with high lip and foot; single handle with scroll end; cover is repetition of form of the cup, but with broad flat upper rim; within are two coats of arms, Scharff of Nuremberg and Horlin of Augsburg, and date 1518; decoration is scale-pattern in white and coloured enamel with gilding; inscribed.

Commentary from Tait 2012: '[WB.59], known in German as a covered "Scheuer", is decorated in the typically Venetian manner of around 1500 except for the cover, which is enamelled with two coats-of-arms. These were identified and published in 1927 as the arms of Scharff and Hörlin, patrician families of Nuremberg and Augsburg respectively, although it now seems that the first shield may be copied from the arms of Seuthe of Augsburg. The date, "1518", enamelled above the two shields, was surprisingly early and consequently this perfectly preserved "Scheuer" was a tempting acquisition for any collector of Renaissance objets d'art. When it was bequeathed to the British Museum in 1898, neither its earlier history nor the existence of any similar pieces was known. By 1911 an identical specimen had appeared in the Prague auction sale of the Lanna Collection (lot 708), but expert opinion was generally agreed that the Prague specimen had been made in imitation of the genuine one now in the British Museum and this view was published in 1927. The London example continued to be published as genuine, especially in two important books in 1958 and 1965, until the Robert Lehman Collection Wing of the Metropolitan Museum of Art opened in 1975. It contained an identical "Scheuer" and cover, also dated "1518". Comparative studies revealed that they undoubtedly had a common origin, but neither the character of the glass nor the methods of the decoration were consistent with an origin in the early sixteenth century.

These serious doubts were to be confirmed in 1980 when another similar "Scheuer" and cover appeared on the London art market: it was enamelled with the identical pair of coats-of-arms but the accompanying date was "1512". Furthermore, although the lower half of the cup was gilded and enamelled in the same way with a shell pattern, the geometrical design used on the cover was entirely different - and, indeed, less convincing for a glass reputably made in Venice in 1512. Any lingering doubts of the spurious nature of this group of glasses was dispelled when, in the same year (1980), another similarly enamelled and gilded cover appeared in London. This cover, of slightly different form but almost identical size, is decorated with the same geometrical pattern that had been used on the "1512" specimen; however, in the centre, it is painted with only one heraldic shield (with a lion rampant) and the date "1615" (arranged on either side of the shield). The decoration of this cover offered irrefutable evidence of the activity of an over-confident faker and it soon became clear that none in this group is older than the late nineteenth-century. The illustrations of the "1512" "Scheuer" and the "1615" cover have been kindly supplied by Christopher Sheppard; both pieces have a key reference value and were, most fortunately, acquired by the Corning Museum of Glass, New York, where they can be studied by future generations.'

The Lehman Collection example referred to above is in the Metropolitan Museum of Art (inv. no. 1975.1.1154a,b), and the accession numbers for the pair of pieces now in the Corning Museum is 80.3.38.