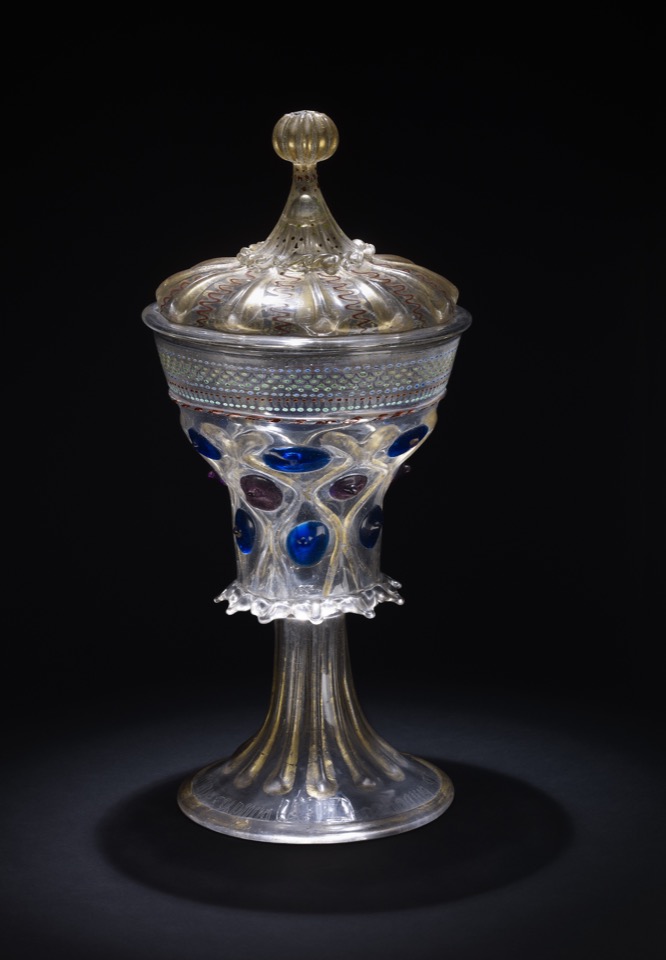 The form derives from silver standing cups. The coloured glass blobs (prunts) and gilding give this cup a jewelled, sculptural quality, making it a rare Rothschild treasure. The Czech inscription engraved on the foot shows that the Cup was used to toast guests at Deblĭn, in Moravia, near Brno (Czech Republic): ‘Praise the Lord; drink cool wine to the health of Deblĭn’.

Standing cup and cover; glass; slightly enamelled and gilded; bowl of ogival outline with gilt ribs forming a diaper, lozenges filled with large prunts of red and blue glass; round the lip, a scale pattern in gold, green and red, all with gilding; foot has similar ribs; inscribed.The cover with raised gilded ribs, finial with knop and frill round the base, also gilt; enamelled squiggles in red between ribs.

Commentary: Text from Tait 1981 - '...a tall standing-cup and cover , the shape of which is wholly Gothic. The wide band of gilding around the rim of the cup with its dotted design of coloured enamels superimposed gives a "jewelled" effect - a form of ornamentation that became a feature of the finest enamelled glasses from Venice in the late fifteenth and early sixteenth centuries. The rest of the decoration on the sides of the cup is, however, most unexpected: on to the clear glass have been trailed ribs of clear glass, which were subsequently gilded; these ribs have been made to form a looze, lozenge-like pattern and within each of these roughly formed lozenges is applied a blob of coloured glass. These blobs, or "prunts" as they are usually called, form three horizontal zones, the upper and lower being made of blue and the central being an aubergine or deep red; the tip in the middle of each prunt is gilded. In Venice the use of "prunts" as a form of decoration for glass vessels was most exceptional; indeed, only four other examples of this type are known.* It seems possible, therefore, that these five magnificent glasses may have been specially made to order for princes or powerful patrons north of the Alps, where such decoration was popular and where the late medieval forest glass-houses, especially in Germany and Bohemia, had a well-established tradition of embellishing their crude greenish glasses with "prunts". This interpretation is supported by an inscription, engraved with a diamond on the cover of one of the four similar glasses: it lists four members of the prominent family of von Puckheim and is dated 1639, the year when Count Adolf von Puckheim was killed in a tournament in Prague. Yet more support may be found in the words iof the diamond-engraved inscription that has been added to the foot of the Waddesdon Bequest standing-cup; it is written in Czech and may be translated: "Praise the Lord and drink cool wine to the health of the Lords of Deblín". The castle of Deblín, with its village and lands, was situated in Bohemia near Brno and, in 1415, passed into the hands of a new overlord, Arkleb z Drahotouše. The Waddesdon glass standing-cup and cover, which was most probably made in Venice during the second half of the fifteenth century, does resemble in general shape certain contemporary silver cups from Bohemia and Hungary; it therefore remains an interesting possiblity that, after its arrival from Venice, this magnificent tall cup and cover may have become the "Welcome" cup of the Castle of Deblín.'

A further, more crude inscription underneath the base reads 'Drink from this all of you, the year 1415'. As the glass must be late 15th century, this inscription must have been added later than 1415.