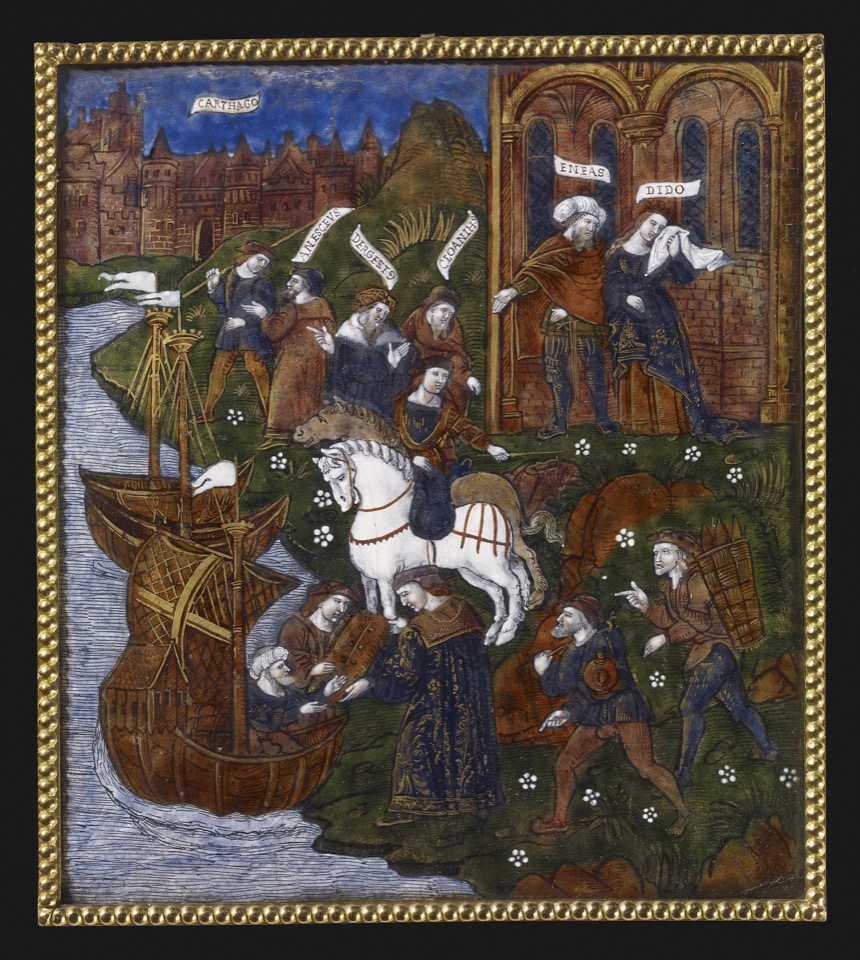 Queen Dido weeps as her lover, Aeneas, leaves Carthage. From a set of about 74 plaques telling the story of Virgil’s Aeneid. The scenes copy woodcuts from Johann Grüninger’s edition of Virgil (Strasbourg, 1502). The maker is unidentified. The set probably decorated the panelling of a French Renaissance château.

Master of the Aeneid Series

Commentary from Tait 1981: '[The plaque of Aeneas leaving Carthage and bidding farewell to Dido] is one of a large set, of which seventy-four are known to have survived. All are closely copied from the woodcut illustrations of an edition of Virgil's 'Opera', edited by Sebastian Brant and first printed by John Grüninger in Strasburg in 1502, or, arguably, from one of the two subsequent editions printed at Lyons in 1517 and 1529, in which the same woodcuts were again used. There were 143 woodcuts in the first edition of Grüninger's Virgil, but no enamel plaque copied from any of the last three Books of the 'Aeneid' is known. Because each plaque is a 'unicum' and because it is rare in Limoges painted enamels to find no repetition or close variant of a subject, it may be assumed that the complete set must have been a very special commission, perhaps made to decorate the walls of a study or a cabinet of an eminent patron at the French court. Neither the identity of the enameller nor the date at which the set was painted can be established with certainty. Of course, the Late Gothic style of the figures and of the composition of the narrative scenes is an accurate reflection of the work of the artist who made the woodcuts in 1502 and therefore does not help to date the plaque, but certain technical aspects of the enamelling indicate a date of manufacture after the first quarter of the sixteenth century. Each copper plaque in the set was first silvered and then the composition delineated in russet lines directly onto the metal. A tan-coloured translucent enamel is used for large areas, thereby permitting the metal to shine through. Many details are picked out in gold and most of the shading is executed in black, whilst foil is sparingly used for the dresses. Because the attribution of this set to the ageing Jean I Pénicaud, who is not recorded after 1543, seems unconvincing, it is probably better to retain the earlier formula and simply state that it was painted by the unknown 'Master of the Aeneid Series', probably about 1530-40.'

Assemblages of plaques from the same series can be found in the Louvre, the Metropolitan Museum, the Walters Art Gallery, with others dispersed amongst private collections.