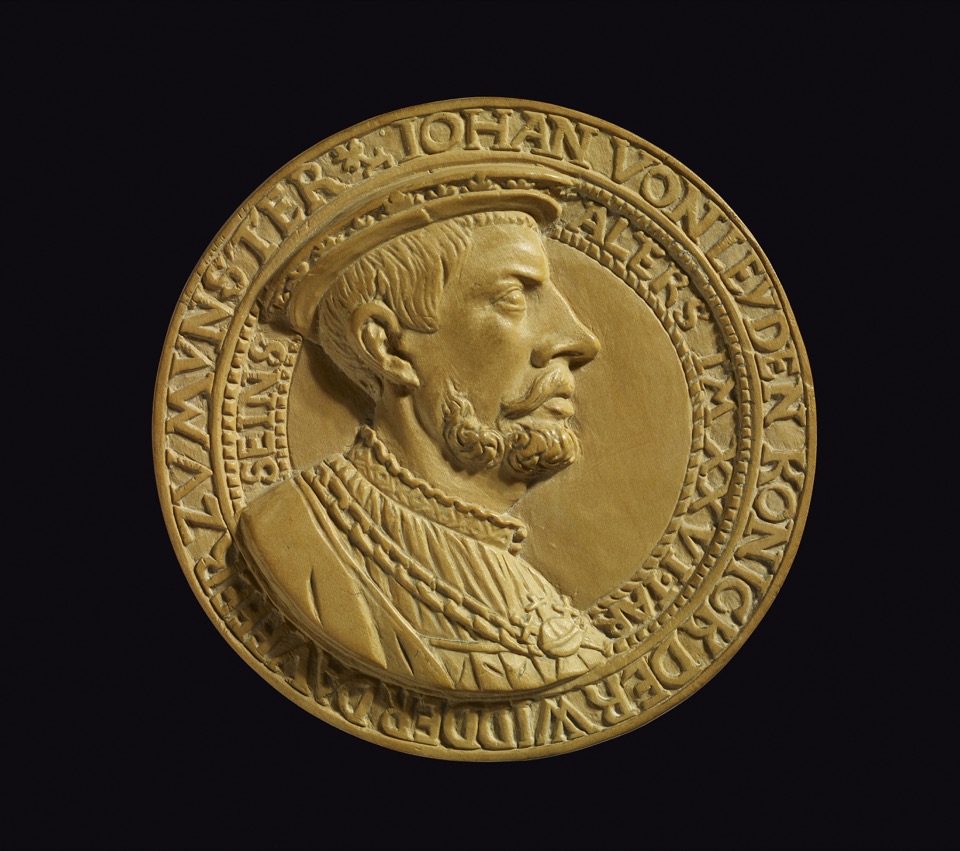 Model for medal of John of Leyden

Jan Bockelson, called Jan van Leyden, (1509?– 1536) was the leader of the Anabaptists, a radical religious sect in Münster, Germany. They expelled Catholics and Lutherans from the town and made Bockelson their king. They were executed in January 1536. The cages in which their bodies were later displayed can still be seen on the tower of St Lambert’s church in Münster.

Circular medallion portrait bust (template for medal) in boxwood of John of Leyden, leader of the Anabaptists of Münster; in profile with short hair and beard, wearing a flat cap, and chain around his neck suspending an orb with three swords issuing from it; inscribed.

Commentary: 'Jan Bockelson, called Jan van Leyden (c.1509 - 1536) was the self-appointed leader of the Anabaptists, a radical religious sect based in Münster, which expelled all Catholics and Lutherans from the town and established a form of theocracy, with Bockelson calling himself King. Bockelson and his associates were executed in January 1536; the cages, in which their bodies were subsequently suspended from the tower of St Lambert's church in Münster, can still be seen today.' (From 2005 label for Heinrich Aldegrever portrait of Jan van Leyden, BM 1886,0609.38)

The pendant suspended on a chain around Leiden's neck is an imperial orb pierced with two swords and surmounted by a cross, which was adopted by him for the arms of his kingdom, and also recorded in two contemporary depictions of him in the British Museum - 1886,0609.38 and 1868,0822.277. ( See J. Rowlands, 'Drawings by German Artists and Artists from German-speaking regions of Europe in the Department of Prints and Drawings at the British Museum: the Fifteeth Century, and the Sixteenth Century by Artists born before 1530', London, BM Press, 1993, no. 46.)

According to Habich 1929-34 there is a bronze version of the medal in the Schloss Wolfegg.