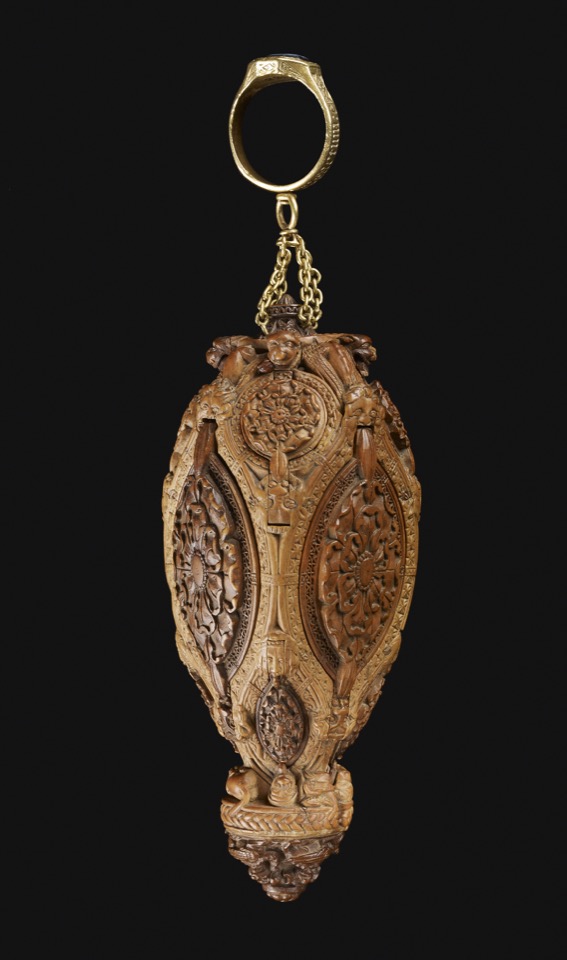 The carving appears to be a fake. The genuine finger-ring was an integral part of the deception.

Devotional carving in boxwood; pendant from a gold signet-ring; ring with flat hoop engraved on outside and octagonal bezel set with antique intaglio on a nicolo, of a genius with palm branch and crown; rosette with a lozenge on each shoulder, once enamelled; pendant of long oviform shape with four flat faces with smaller faces to form a dodecahedron; on each face is relief carving concealed by hinged lid; larger faces represent Virgin and Child, St John the Baptist, Jesus Christ and St Catherine; upper set of smaller ones contain two censing angels, eagle of St John and angel of St Matthew; lower set contain censing angels, emblems of St Mark and St Luke; rose in relief on each lid, catches in form of grotesque heads or animals with protruding tongues; finial at lower end carved in form of four monstrous quadrupeds with long necks; inscribed.

Origin: The nicolo engraved in intaglio, late Roman; the finger-ring late medieval, perhaps Italian, 14th-15th centuries; later additions, probably second half of the 19th century, include the inscription on the hoop, the three short suspension chains and the attached devotional wood-carving.

Commentary: The tiny bolt (or rivet) piercing the gold hoop in the centre and the tiny suspension ring cannot have been added before 1864. Furthermore, they were evidently intended to be accompanied by a faked black letter inscription, engraved on the exterior of the hoop because the word ‘caro’ has been split on either side of the bolt fixing. Indeed, a whole letter space (or slightly more) was left blank in the middle of the word, so that the rivet or bolt-head would not obscure or impinge on the lettering. Alternatively, the inscription, ‘verbum caro factum e[st]’, was added to the undecorated hoop after the bolt and chains had been attached. Either way the inscription on the hoop cannot have been engraved before the bolt attachment had been planned or completed.

The wooden object has no recorded history or provenance but in the late nineteenth century purported to be a wood-carving of the early fourteenth century, perhaps of English origin. This wood-carving, together with other items of sculpture in the Waddesdon Bequest, will be fully analysed and discussed in a subsequent volume of this catalogue, but here it is enough to summarise the conclusions in so far as they shed light on the origin of the attached signet-ring. The wood-carving totally fails to carry conviction as a medieval object but would seem to be a highly imaginative product of someone well-informed about medieval art, especially German, French and English Gothic sculpture and manuscript illumination of the fourteenth century. The object is completely without parallel both in its shape and construction, and in its function and genre. It can only be left lying on its side, except when worn with the finger-ring and so held in the hand, but it shows no sign of wear, nor has it acquired the patina that always comes to a much handled medieval boxwood object. Neither its size, shape nor its technical features conform with any known class of objects in the fourteenth century such as rosaries; there seems little doubt, therefore, that it was made in the nineteenth century to deceive and the addition of the finger-ring was an integral part of the deception.

It would not have been difficult or expensive to acquire a genuine signet-ring of the fourteenth century for this purpose and a genuine finger-ring would help to convey an impression of authenticity for an otherwise unique type of object, which might therefore be regarded with doubt and suspicion. However, the signet-ring with its late Roman intaglio was evidently thought to be too plain for so grand and rare an attachment. In planning the further enrichment the hoop was evidently to be engraved with a very convincing black letter version of this well-known inscription, but the craftsman was obliged to split the word ‘caro’ when he reached the hole for the bolt and then found he had no room for the last two letters, 'st'. Being rather ill-informed, the engraver left off these two letters without adding an abbreviation sign over the 'e' of 'est'. Dalton, who in 1912 drew attention to the use of this particular inscription on another finger-ring in the British Museum's collection (no. 895), did not question its authenticity at any stage. Furthermore, he remained convinced that the signet-ring itself was an Italian finger-ring of the early fourteenth century and repeated this attribution when, in 1927, he revised Read 1902. No previous publication has expressed doubts about the age of the black letter inscription nor about the attached boxwood carving, but the latter will be dealt with in complete detail in the appropriate volume of this catalogue.