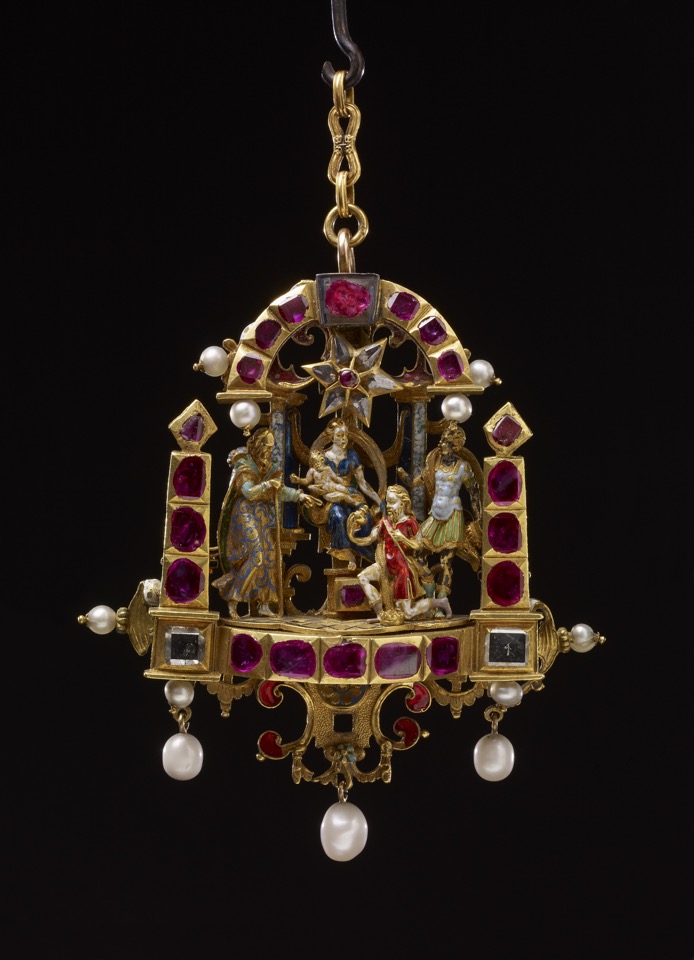 The Adoration of the Magi

Pendant jewel; gold; centre: Adoration of the Magi, Virgin seated holding the Child under large star of diamonds; Joseph to right; two kings to left, one kneeling (third missing); obelisk either side set with rubies, above a round arch; scroll base with pendant pearls; back plate pierced and enamelled with design in semi-architectural character, in style of Daniel Mignot. Openwork.

Commentary: The attribution of the jewel to a German workshop in Read 1902 has since been consistently maintained in both Dalton 1927 and Evans 1953 (rev. edn 1970). Exceptionally, there exists at least one modern silver-gilt version, enamelled and set with diamonds and rubies. It is preserved in the Schmuckmuseum, Pforzheim, and has been published as “historisierende Arbeit im Stil der Zeit um 1590” but made “um 1700” (see Horst Appuhn, ‘Renaissance-Anhänger’. Schmuckmuseum, Pforzheim, 1970, pp. 8-10, figs 11-12). Although no reference was made to the Waddesdon original, Horst Appuhn correctly described the silver-gilt version as a later pastiche, but whether it could have been made as early as 'um 1700' is extremely doubtful. Nevertheless, it is instructive to see how closely the original has been copied and yet how unmistakably the figures have been transformed into that neo-Renaissance style which enjoyed such a vogue, especially in Paris and London, during the second half of the nineteenth century (see Hugh Tait (ed. and contrib.), ‘The Art of the Jeweller, A Catalogue of the Hull Grundy Gift to the British Museum: Jewellery, Engraved Gems and Goldsmiths’ Work’, London, 1984, pp. 163-73). The most likely time for this jewel to have inspired the pastiche in Pforzheim is the 1870s, when it was twice on public exhibition in South Kensington.

The Pforzheim copy offers reliable evidence about the missing figure of the third king on the Waddesdon pendant and also the lost jewel that was set in the centre of the lower part (beneath the 'stage') but only marked now by a square hole. The only other major difference on the Pforzheim jewel is the reduced area of the 'stage', which results in the kneeling king's left foot projecting over the front, in St Joseph appearing to be off-stage on a separate, tiny raised 'platform' (placed above the diamond on the left) and in the black king being similarly placed off-stage (above the diamond on the right). Although the Pforzheim version is greatly inferior in many respects, it would be interesting to establish precisely how it came to be made and whether other cheap versions of the jewel have survived.

Jewels of this form, incorporating the gem-set arch above the 'stage' with its semicircle of gemstones flanked by obelisks, have not often survived, but an incomplete example in the Grünes Gewölbe in Dresden depicts Justice and Peace (see W. Holzhauzen, Meisterwerke der Juwelierkunst 16 und 17 Jahrhunderts in ‘Jahrbuch der Kunsthistorischen Sammlungen in Wien’, N.S. IX, 1935, p. 174; also illus. in Yvonne Hackenbroch, ‘Renaissance Jewellery’, Sotheby Parke Bernet Publications, London, New York and Munich, 1979, fig. 415). Another example, but with a scene of Roman Charity, is preserved in the Rijksmuseum, Amsterdam (see ‘Uit de Schatzkammer’, Amsterdam, 1967, no. 27, and illus.), although recently this jewel has, without any justification or discussion, been condemned as “probably nineteenth century” (see Somers Cocks 1984, p. 97). In fact, doubt now falls not on the Amsterdam Roman Charity pendant but on the two close variants which are identical: one is the Melvin Gutman Collection example, now in the Thyssen-Bornemisza Collection (no. 14, pp. 96-7), and the other is the Desmoni Collection example, now in the Hull Grundy Gift to the British Museum (seeTait 1984, no. 263, pp. 41-3 and illus. of front and back). They were almost certainly not made before the middle of the nineteenth century for reasons very carefully argued and set out in the British Museum's ‘Catalogue of the Hull Grundy Gift’. The reverse of the Thyssen-Bornemisza Collection version has not been illustrated (see Somers Cocks 1984, no. 14), but it is evident from the brief description that there is no significant difference to be found between these two Roman Charity pendants, whereas the larger jewel in the Rijksmuseum has many differences and is both superior in quality and closer to the Renaissance sources.

The use of 'marbled' enamelled columns on the reverse of this Magi pendant jewel is paralleled on the Faith pendant in the Grünes Gewölbe, Dresden (U. Arnold, ‘Schmuckanhänger’, Schriftenreihe der Staatichen Kunstsammlungen, Dresden, 1964, p. 54, no. 18, pl. 22; also Hackenbroch 1979, p. 20 E, fig. 568 A-B). It seems, however, to be a rare refinement, whereas the black-enamelled scroll decoration on the reverse of the two obelisks and other parts (like the semicircular arch) is less exceptional; indeed, it is similar to that found on the reverse of the gem-set Faith pendant in the Danish Royal collections in Rosenborg Castle (illus. in Hackenbroch 1979, fig. 570 A-B). Among the few well-documented jewels of this openwork, 'platform-stage' type is the famous David and Goliath pendant in the Grünes Gewölbe, Dresden (see Joachim Menzhausen, ‘Grünes Gewölbe’, Dresden, 1967, p. 90, no. 67 (i), col. pl. 67). This jewel has already been cited in the commentary on the St George and the Dragon hat-jewel (cat. no. 4, p. 73) [WB.172] and the use of diamonds to depict armour, but it is also highly relevant to this discussion because with its comparable bow-fronted ruby-set 'stage' and its elongated Mannerist figure style it can be reliably dated to the late sixteenth century. This elegant figure style became popular in Southern Germany and is a distinctive characteristic of the Munich court jewellery especially to be found among the 'hausaltars' in the Munich Schatzkammer (see Ulla Krempel, Augsburger und Munchner Emailarbeiten des Manierismus, ‘Münchner Jahrbuch der bildenden Kunst’, XVIII, 1967, pp. iii ff., fig. 41).