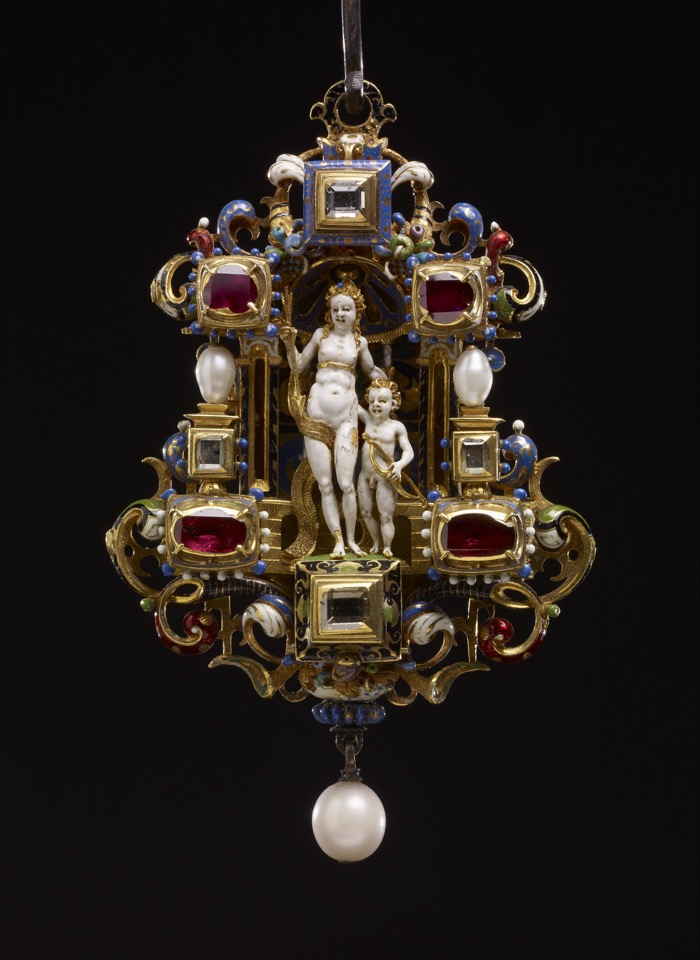 Pendant jewel; gold; centre: Venus and Cupid in white enamel, in alcove with rounded arch supported by three onyx columns; set around figures in geometric fashion are quadrangular diamonds and rubies, pearl at each side and single one pendant from base; outer edge with openwork scrolls, enamelled and chased; back with convex plate with arabesque design, engraved and filled with enamel.

Commentary: The jewel's provenance had seemed to preclude the possibility of its origin in Reinhold Vasters' Aachen workshop in the third quarter of the nineteenth century (see Introduction, pp. 12-13), despite its many suspicious characteristics (discussed below). However, the very recent discovery in Kiel of a close parallel to the Waddesdon Bequest Cleopatra pendant (cat. no. 14) [WB.151] has served only to strengthen the author's grave reservations about the authenticity of this Venus and Cupid pendant. There can no longer be any doubt that the Cleopatra pendant is a nineteenth-century creation and, in the absence of other evidence, it would have been reasonable to attribute its fabrication to the notorious Vasters' workshop. However, the Venus and Cupid pendant is so remarkably similar in many technical respects that it would be illogical not to attribute it to the same workshop. Such an attribution would present a problem if, as is generally supposed, the Marchioness of Conyngham acquired most of her wealth and especially her famous collection of jewels (said to have been worth £80,000) from the king, whose mistress she remained until the monarch's demise in 1830. The jewel may not have been part of those received from George IV in the ten-year period of her domination of the Court, where she lived entirely at the king's expense in a grandly extravagant manner, and behaved “entirely as Mistress of the Household” (‘Greville's Memoirs’, eds L. Strachey and R. Fulford, 8 vols, London, 1938). There is no written record of how or when she acquired this jewel, but it must be remembered that she became a widow in 1832 and as Dowager Marchioness of Conyngham went to live in Rome “in such absolute seclusion that hardly ten people are aware of her existence” (according to Lord Houghton in a letter of 28 February 1834, quoted in W. H. Wilkins, ‘Mrs Fitzherbert and George III’, 1905, vol. 11, p. 210). There remains the possibility that she began to collect again at a later stage (c. 1850) after her younger son had in 1850 inherited the Denison estates, become an extremely wealthy man, and been created Baron Londesborough. However, she was by then an elderly woman and is therefore perhaps unlikely to have resumed her passion for jewellery. She died in 1861 at the age of ninety-two.

The extraordinary fine state of preservation of the jewel must immediately arouse suspicion, though in itself it may have no significance. Jewels of this quality, once out of fashion and locked away, ran little risk of damage. However, this type of jewel was undoubtedly faked by craftsmen like Reinhold Vasters (see ‘Princely Magnificence’ 1980, nos H. 18 and HG 2; the latter is a Vasters coloured design for an 'architectural' pendant now in the Walters Art Gallery, Baltimore, lent to the exhibition (no. H. 18) as an example of a Vasters fake). There is no Vasters drawing that corresponds with this Venus and Cupid pendant, although the back of the pendant should be compared with a somewhat similar Vasters drawing (Victoria and Albert Museum, E. 2814-1919). Lady Conyngham's jewel would most probably have been acquired before Vasters himself was active; however, there still remains the question of how early in the nineteenth century goldsmiths had started to make pseudo-Renaissance jewels of this type. At present, the most conclusive evidence is provided by the famous Beckford smoky crystal ewer, which by 1819 had been enriched with its extraordinary flamboyant and technically accomplished mounts of gem-set and enamelled gold (see Clare Vincent, in ‘The Jack and Belle Linsky Collection in the Metropolitan Museum of Art’, New York, 1984, p. 179, no. 95). The goldsmith or jeweller who made those pseudo-Renaissance mounts was highly talented and fully qualified to make the Venus and Cupid pendant jewel. The same skills and flair for design can be observed in both, but whereas the Beckford ewer mounts have a terminus ante quem of 1819, the Lady Conyngham jewel is less well documented. However, it can be faulted for the same reason that led Clare Vincent to recognise that the Beckford ewer mounts “are in all probability the product of a still unidentified London goldsmith c. 1810-1819”. The working of the gold, the setting of the gemstones and the assembly of the parts combine to demonstrate that the jewel cannot have been made in the Renaissance.

The Venus and Cupid jewel is only held together by two nuts and two screws, one at the top and one at the bottom. When unscrewed, the back-plate comes off because, in the centre, are two small holes that slip over the heads of two short pins but are in no way attached to them. The two screws are long and pass through the jewel from the front where they are attached to the backs of the settings of the two large diamonds. The inside of the back-plate is enamelled in precisely the areas that can be seen behind the niche with its three openwork thin vertical bars. The figure group of Venus and Cupid is solid gold, partly hollowed out and enamelled in white only on the front and sides. Furthermore, it is cast in one with the partly enamelled rectangular frame (below) into which the enamelled square setting of the lower diamond fits. The whole architectural setting for the figure group is also cast, and everywhere the jewel betrays its modern origins by its crisp, fresh, almost perfect condition.

Perhaps the most damning piece of evidence is to be found in four places on the sides of the jewel, where the tell-tale signs of the removal of four projecting 'casting lugs', or sprues, on the four projecting scrolls can easily be seen. All four scrolls have enamelled decoration, but on the outer edge there is a short scar - a small, flat, filed-off strip, where there is no enamel. The significance of this blemish (repeated four times on each of these projecting scrolls) had not been established until recently, when there appeared in Kiel a similar type of jewel with two of its 'casting lugs' still in situ, one on either side. They had been snapped off about a quarter of an inch from the edge of the two lower scrolls but had not been filed away. This important new evidence was found by the author when carrying out a close inspection of the jewel because of its great similarity to the Cleopatra pendant jewel. The Kiel jewel has a figure group of Charity, but otherwise the two pendants are extremely alike; indeed, the principal parts have been cast from the same mould (for a full discussion see p. 116). In an attempt to compare the areas of the 'casting lugs', the three jewels were photographed in colour so that the filed-off blemishes on the two Waddesdon jewels could be juxtaposed alongside the short 'casting lug' of the Kiel jewel. The fact that these four scars have been left undisguised on the Venus and Cupid pendant is not only out of keeping with Renaissance practice but is a measure of the confidence of these early nineteenth-century fakers.

This jewel, with its mixture of almost perfect preservation and its curious inconsistencies of design within the rigidly symmetrical arrangement, has increasingly helped to shed light on the earliest phase of neo-Renaissance jewellery in England: for example, the fluted, blue-enamelled corbel at the base of the jewel is quite unexpectedly cut flat on the reverse, and the flat surface is enamelled in white and decorated rather meaninglessly with three dots. Equally curious is the drapery on the figure of Venus for none of its characteristics is easy to parallel on documented Renaissance jewels; it is not even clear where it begins. Even Venus' hair with its ringlets falling on to the shoulders is exceptional. Although the pierced dome of the semicircular niche in the centre of the pendant is reminiscent of one particular Antwerp design by Hans Collaert the Elder (c. 1530 - before 1581), whose work has been referred to in detail in cat. no. 11 (p. 106) [WB.153], little else in the design corresponds (see ‘Princely Magnificence’ 1980, p. 126, no. G. 29a). It is, therefore, unlikely that the Collaert engraved designs were the source from which this faker drew his inspiration; more probably he had genuine, but damaged, originals to copy - but, of course, his techniques of manufacture were not those of a Renaissance goldsmith.