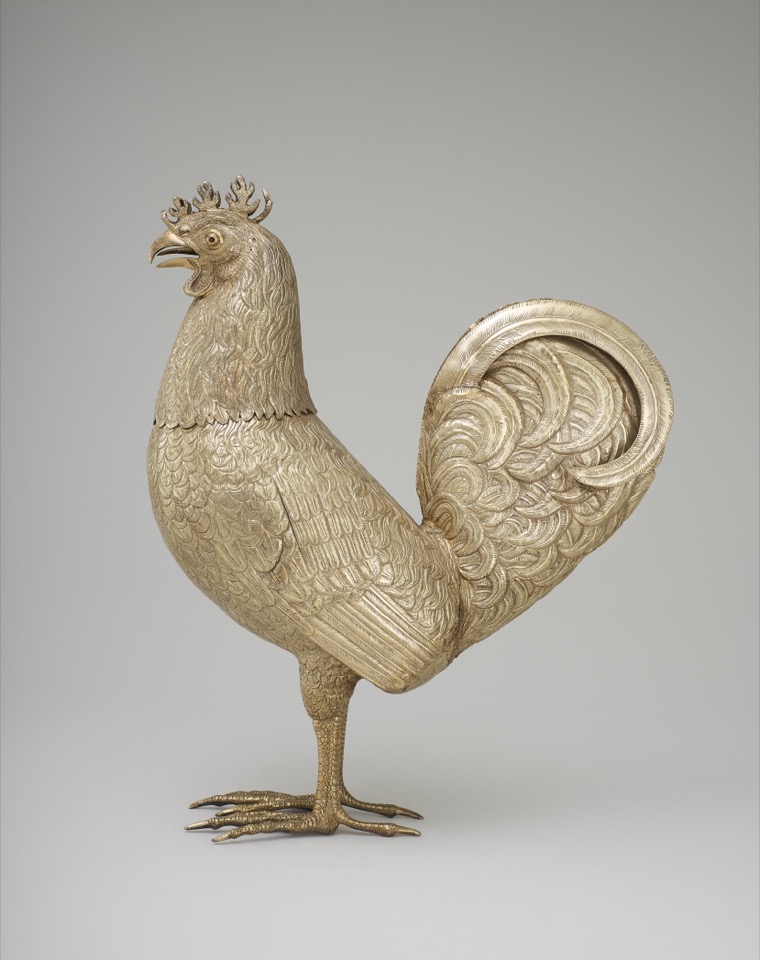 (i) Crowned rose for the town of Dordrecht (The Netherlands).

(iii) Monogram HB above two interlaced v-shaped lines, one being inverted, within an indented shield, said to be the punch of Huybert van de Berch.

Commentary: In Read 1902 and Dalton 1927 this standing-cup in the form of a cock was attributed to an unidentified German workshop c. 1600. In a letter dated 5 July 1950, Baroness A. van Harinxma thoe Slooten interpreted the marks as those of the town of Dordrecht and the year letter of 1607, but made no comment on the maker's identity. In the Netherlands, new information about Dordrecht silver in the seventeenth century, including silver cock and hen cups, was published in C. J. Hudig, ‘Zilver van de Nederlandse Edelsmid’, Amsterdam, 1951; in the ‘Dordrechts Nieuwsblad’, 12, IV, 1952; and in the exhibition catalogue

‘Vier eeuwen Nederlands zilver’ (The Hague, 1952); however, in 1961 J. W. Frederiks published an account of the goldsmith Huybert van den Berg (sic), of Dordrecht, in the fourth volume of his great illustrated survey ‘Dutch Silver’, Vol. IV, ‘Embossed ecclesiastical and secular plate from the Renaissance until the end of the 18th century’, The Hague, 1961, pp. 99-100, pls 226-8. He stated that Huybert van den Berg was born in Dordrecht in 1623, the son of the silversmith Andries Gysbertsd and his wife Elizabeth, and that he married Susanna de Moly (sic) in 1643. Of his oeuvre, Frederiks stated that nothing is known except for “a number of sugar-boxes in the form of birds. They are exquisitely modelled and the execution is irreproachable”. Frederiks illustrated three examples: a cock and a hen (both belonging to the Museum Mr S. van Gijn, Dordrecht) and he dated them 1648 and 1640 (or 1663), respectively. He also described and illustrated a partridge, likewise standing without a base; it bears the date-letter O, which he ascribed to the year 1659. He did not explain why he referred to these bird cups as 'sugar-boxes'.

By 1975, when the exhibition catalogue ‘Dordrechte goud en zilver’ (Museum Mr S. van Gijn, Dordrecht) was published, opinions had changed about these two standing-cups (nos 17 and 25); the cock (with its date-letter C) was redated 1625 - without any reference to the previous published date of 1648; the hen (with its date-letter S) was still dated 1640 (as in Frederiks, though without the possible alternative of 1663). If Frederiks had been correct about 1623 being the date of birth of Huybert van den Berg, then the goldsmith was only two years old when the cock (with the date-letter C) was made. The compiler of the 1975 Dordrecht museum exhibition catalogue (p. 55) provided a brief biographical note on each of the goldsmiths represented in the exhibition and for Huybert van de Berch (sic) there is only one written record quoted - his marriage on 28 April 1643 to Susanna de Mely (sic). No date of birth or death (nor any other event) is quoted in the 1975 catalogue, but it is stated: “Vermeld: 1643-1656” (active: 1643-1656). It is not made clear why the second date is given, since none of the listed items bearing his mark is said to be later than 1648.

Significantly, ‘Dutch Silver 1580-1830’, an exhibition catalogue (in Dutch and English) edited by A. L. den Blaauwen (Rijksmuseum, Amsterdam, 1979) contained one item - a silver swan - by Huybert van de Berch (no. 37, with illus.). It bears, in addition to the maker's mark, the mark for Dordrecht and the date-letter R, which is said to be for the year 1639. However, no dates or facts about the life of this goldsmith are given, and the swan itself appears not to have a documented history, for the catalogue entry reads: “the swan wears a silver-gilt crown from which hangs a badge depicting St Martin. It is possible that the swan may have come from the St Martin's or Secondhand Clothes Dealers' Guild at Dordrecht.” The swan is part of the Rijksmuseum's collection and it would seem that the Rijksmuseum does not accept the account published by Frederiks in 1961, since, according to Frederiks, Huybert van de Berch would have been sixteen years old in 1639 when the swan is said to have been made. This is clearly an untenable proposition, since the swan is a large and highly complicated piece of silver plate.

Frederiks acknowledged the difficulties in deciding which cycle of date-letters applied to these objects bearing Huybert van de Berch's mark. If the earlier cycle is now accepted as the correct one, then Frederiks' statement that he was born in 1623 must be dismissed as erroneous. Apart from the swan of 1639, the following items were recorded in the 1975 Dordrecht exhibition catalogue:

Each catalogue entry includes a line drawing of the marks, and there is no distinction between the C of 1625 (no. 17) and the C of 1648 (no. 33). The two punch-marks are identical. It makes no sense, therefore, to assign one to the earlier cycle of date-letters and the other to the following cycle. Indeed, if the cock and hen are intended to form a pair, then it might be expected that at least one pair bearing the same date-letter would have survived. Perhaps no. 17 and no. 33 were both marked in 1648.

If there is only one reliable fact known about Huybert van de Berch - that is his marriage in 1643 – then it is fair to deduce that he probably married soon after he became a master, normally between twenty and twenty-five years of age. In the absence of any other information about the working life of this goldsmith it is impossible to accept the 1625 interpretation of the C date-letter, and it raises serious doubts about the feasibility of the R date-letter on the swan (Rijksmuseum) being as early as 1639, or the S date-letter on the hen (Dordrecht) being as early as 1640.

The Waddesdon Bequest cup in the form of a cock bears the date-letter O, and it seems equally questionable whether this piece could have been made by Huybert van de Berch as early as 1636 (the earlier cycle) or whether it should not be dated to 1659. The later date would conform with Frederiks' view of the partridge (with an O date-letter), which he stated to be 1659.

Curiously, the three extant cocks bearing the punch-mark of Huybert van de Berch - the Brussels, Dordrecht and London examples - are identical models. They are copied from the same prototype and have virtually no differences, though the version in Dordrecht has no spurs.

The author's unexpected discovery in 1986 of an identical cock and hen, bearing the town-mark of Ulm (R3 4736) and an unidentified maker's mark, C F, may provide the answer. This German pair, acquired without any history by the Ulm Museum in 1980 (inv. no. A.I. 1980. 9092A + B), were lent in 1986 to the large Exhibition in Heidelberg Castle entitled ‘Die Renaissance im Deutschen Südwesten, zwischen Reformation und Dressigjahrigem Kreig’ (see R. Sänger, Gold- und silberschmiedekunst , Bergkristall- und Steinschneidearbeiten, ‘Die Renaissance im Deutschen Südwesten’, exh. cat., Heidelberg Castle, Badisches Landesmuseum, Karlsruhe, 1986, p. 635, no. L. 34). The cock (H. 22 cm) and the hen (H. 20 cm) were, on grounds of style, catalogued as “Ulm, um 1600”, but as there is no firm evidence for this dating this pair cannot be regarded as the indisputable 'prototype' of the Dutch versions, although it seems highly probable. Detailed comparative study and analysis has now to be carried out so that the exact relationship between the Ulm pair and the Dutch versions can be established.

The absence of silver birds and animals in Dutch silver of the seventeenth century has always made these Dordrecht creations of Huybert van de Berch wholly exceptional. They can only be regarded as a highly individual and curious phenomenon connected in some way with the eccentric personality of this virtually unknown goldsmith. Even more puzzling is the absence of any other kind of silver plate bearing this goldsmith's mark.

Under such circumstances questioning doubts about the authenticity and age of these Dordrecht birds by Huybert van de Berch are inevitable, and every effort has to be made to trace the history of these pieces back at least to the mid-eighteenth century. Unfortunately the Dutch records appear not to have yielded any such evidence. The earliest publication of a Dordrecht silver cock of this type was discovered by the author in an English catalogue of the collection formed by Lord Londesborough (died 1860) - see F. W. Fairholt, ‘An Illustrated Descriptive Catalogue of the Collection of Silver Plate formed by Albert, Lord Londesborough, now the property of Lady Londesborough’, London, 1860, p. 9, pl. VII, 1. The description, which does not propose a Dutch origin for the piece, is brief: “Cock, of silver; the tail formed of separate plates; the body chased all over in imitation of feathers. It is marked with a crowned rose, and a shield on which is the letter V surmounted by a ducal coronet.”

The second mark is undoubtedly the nineteenth-century customs duty mark (R3 7555), and its presence effectively rules out any suggestion that Lord Londesborough's example might subsequently have been acquired by Baron Ferdinand Rothschild and included in the Waddesdon Bequest. However, the Londesborough example was evidently punched with the Dordrecht town-mark and, though it is odd that there is no mention of a maker's mark, the line-drawing in Fairholt's 1860 publication establishes beyond doubt that it scarcely differed from the three extant published versions. There is a fourth identical version in the collections of the Rijksmuseum, Amsterdam, and all seem to be made in the same way from thin silver.

If it can be established that all the extant Dutch examples are identical and have been copied from the Ulm pair, then the next stage would be a scientific investigation to determine when the first copies were made. Until then, the origin of this group of Dutch silver birds, which was thought to be the Dordrecht workshop of Huybert van de Berch must remain in doubt.

N.B. See Preface (p. 8) for a report on the dubiously marked (Zwolle) cock in the National Museum, Copenhagen.