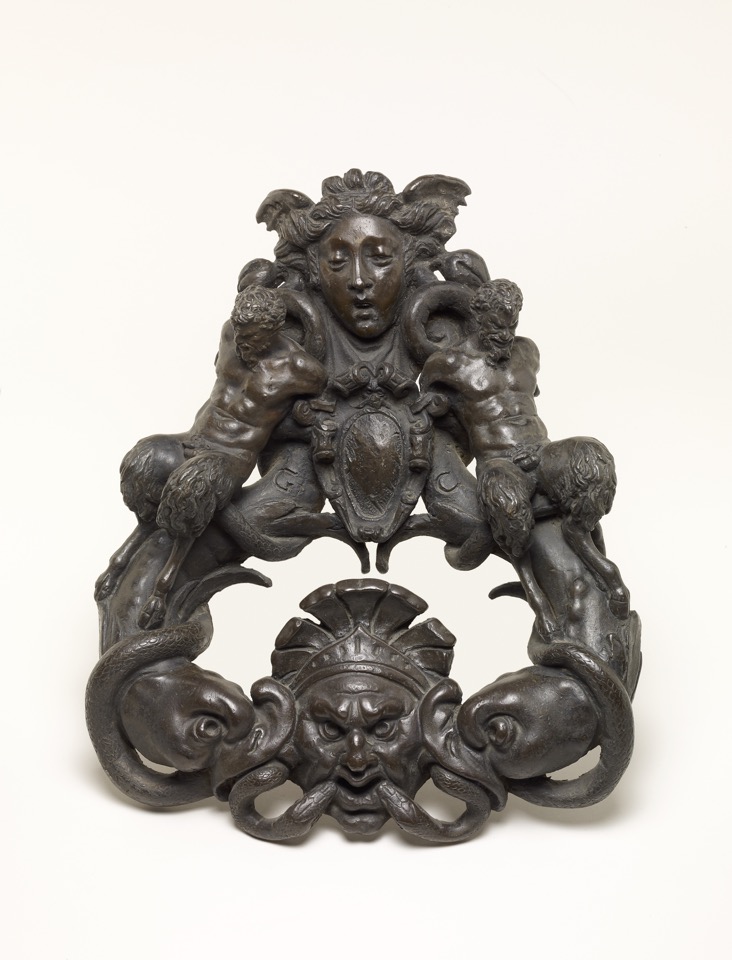 One (10b) shows Neptune with two seahorses and a shield of arms. The other (10a) is one of two designed for the massive doors of the Palazzo Martinengo Dobblo in Brescia. It is made up of two bound satyrs on dolphins, supporting a shield with the initials ‘G. C.’.

Bronze door-knocker formed of two dolphins with snakes twined around them; on the dolphins sit two satyrs, whose scroll arms support a blank shield; above shield a mask of Medusa; below shield a grotesque mask; inscribed.

'The beautiful bronze door-knocker [is] from the Palazzo Martinengo-dobblo, in Brescia, near Milan. Although the coat-of-arms in the centre has been partially obliterated, it is possible to be certain about the origin of this bronze from one valve of the doors of the Palazzo by J.C. Robinson, who had been appointed 'art referee' to the newly created South Kensington Museum, now the Victoria and Albert Museum. In the 1876 "Catalogue of Bronzes at the South Kensington Museum" (see inv. no. above), Fortnum records that he had seen the companion knocker still hanging on the door of the Palazzo in Brescia in 1861, adding that it was one of the few knockers still remaining in the place for which it had been designed; it is not known when it entered Baron Ferdinand's collection.'