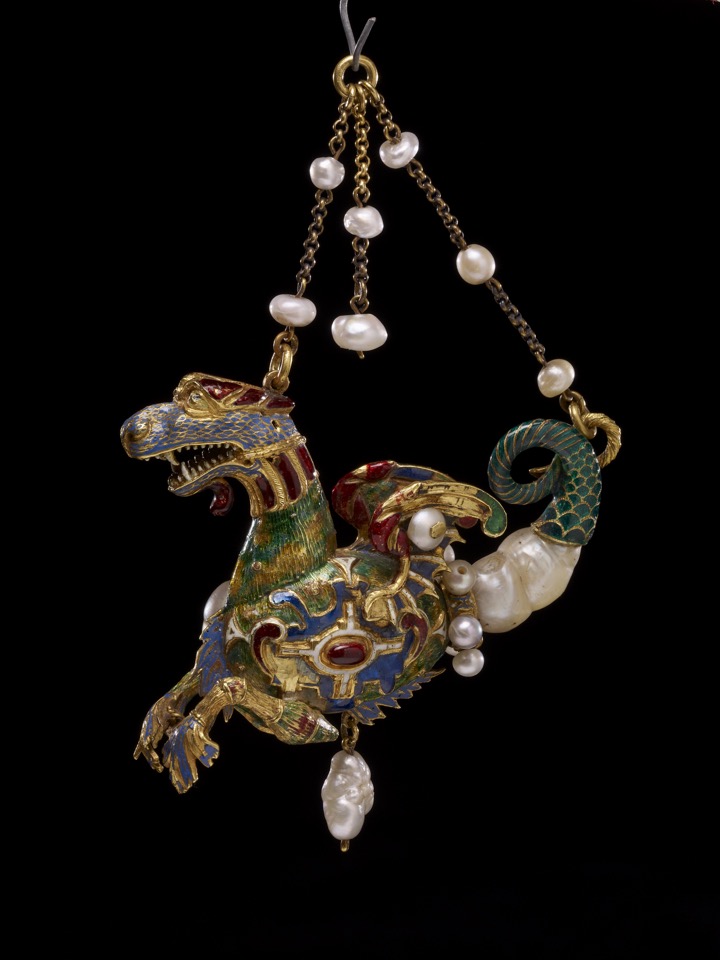 Pendant jewel; gold; form of sea-dragon; tail and one side of body formed of large baroque pearl, other side chased with cartouche and enamelled; colours are blue, green. lavender and ruby; wings are each set with pearls; plain suspension chain set with pearls; pearl pendant below.

See below for previous Tait catalogue entry from 1986. This object is now thought to be 19th century.

Commentary: This magnificent, almost monumental, jewel appears to have survived in its original state except that not only were the suspension chains added later but the gold enamelled tail section terminating in a tiny arrow of red enamel also seems to be a later replacement. The tails of all comparable Renaissance sea-monsters seem to end in some form of trefoil or tripartite 'tuft'; no contemporary drawing in an inventory or in a design book has been found with an arrow-shaped terminal. Furthermore, the double loop forming a figure of eight and the curious strong opaque green colour of the enamel do not seem to accord with known Renaissance practice.

“the lovely hippocampus of enamelled gold (5.5 by 4 cm), which true to the taste of the High Renaissance serves as a setting for the large (3 cm) baroque pearl interpreted skilfully as the creature's flank. The delicate colouring of the enamel varies from ruby-red to deep green, including lapis lazuli blue and topaz, illuminating the triangular scales of the seahorse with a soft orientalising glow. Only the mane and the palmated feet are golden. The other flank has been embellished by numerous pearls profusely spread over the glittering enamelled surface. The belly, too, is marked by a line of pearls. The chains, white on the side of the baroque pearl and blue on the back, set with pearls respectively decorated by ruby-coloured balls, are suspended from a plaque enriched by four pearls arranged in the form of a cross, and a pendant of two other pearls. The piece seems to belong to the second half of the sixteenth century. The somewhat stolid expression of the head gives it a charming and slightly archaic air of artisan's work ...”

From this description, and the black and white illustrations, there can be little doubt that the Santo Domingo jewel and the Waddesdon example are so very alike, both in character and in technical execution, that they may, indeed, be the products of the same workshop. The Santo Domingo jewel represents a more benign form of hippocamp, perhaps based on a sixteenth-century conception of the sea-ox, or faca. It appears not to have suffered any changes and even to have survived with its original suspension chains and the gold enamelled 'cartouche' that unites the chains at the top. More importantly, the massive 'baroque' pearl body still has its original tail which is of a wholly convincing shape and type of enamelled decoration. Furthermore, the scaly tail ends in a bold serpentine loop before terminating in a trefoil 'tuft'. Interestingly, the goldsmith of the Santo Domingo jewel has disguised the joins between the 'baroque' pearl body and the rest of the jewel by a lavish application of small pearls, rather in the manner of the tail join on the Waddesdon jewel. However, the treatment of the backs of the two jewels is not identical, and the stiff strapwork ornament on the reverse of the Waddesdon jewel may be indicative of the spread of the new fashion at a slightly later date. Undoubtedly, the Santo Domingo jewel helps to confirm the attribution of this Waddesdon sea-dragon pendant to a Spanish workshop but does little to establish a more precise dating -probably towards the end of the sixteenth century.

The sequence of drawings, executed by apprentices seeking to become masters of the Barcelona guild of goldsmiths, the famous Llibres de Passanties, also helps to confirm the impression that this magnificent sea-dragon pendant is a Spanish jewel. There is, for example, a drawing in brown ink over black chalk signed by Pere Juan Bastons and dated 1593, which has a comparable quality, though his 'sea-horse' pendant lacks the wings and the menacing jaws of the Waddesdon version and, therefore, is closer in spirit to the Santo Domingo pendant jewel.

Another winged example - with even larger wings than the Waddesdon jewel - is the pendant in the Hermitage Museum, Leningrad (illus. in Hackenbroch 1979, p. 326, fig. 861, where it is described as “Spanish, end of sixteenth century”). Again, the tail of this version does not incorporate a second 'baroque' pearl but, in other respects, the jewel seems to be constructed in a similar way, though its suspension chains and 'cartouche' do not appear to be original.

The Spanish taste for incorporating more than one 'baroque' pearl into these jewels of fantasy is happily recorded in the famous pictorial ‘Inventario’ of Our Lady of Guadalupe, dated c.1777 (Archivo del Real Monasterio, Guadalupe; see Muller 1972, folio 28, col. pl. VI, for unambiguous portrayal. This brown ink and watercolour illustration shows a centaur-like fantastic creature with helmeted bearded head, gem-set drapery, torso of 'baroque' pearl, a horse's legs and hooves, enamelled wings on either side of the horse's body, a 'baroque' pearl rump with enamelled tail and, below, a triangular diamond. According to Priscilla Muller, this particular jewel was donated to the Virgin of Guadalupe in 1677 - no doubt, it was then some seventy years old and its first owner was no longer likely to wear it. Winged sea-horses (caballos marinos) are listed, however, among the jewels already being made in Seville in 1560 (see José Gestoso Pérez, ‘Ensayo de un diccionario de los artífices . . . de Sevilla’, 3 vols, Seville, 1899-1909, vol. III, p. 429.)

The Mannerist taste of the late sixteenth century for these fearsome fantastic creatures was widespread and, despite the vast difference in scale, these jewels can be fairly compared with the justly famous stone carving in the Sacred Grove at the Villa Orsini, Bomarzo, where the use of a natural phenomenon - the outcrops of natural rock - has been interpreted and enriched by the skill of the Mannerist artist (see John Shearman, ‘Mannerism’, London, 1967, p. 125, pl. 68). The Antwerp school of Mannerism was similarly fascinated by this subject, and in the engravings of Hans Collaert the Elder, published in 1582 in Antwerp by Phillippe Galle, an impressive variety of interpretations were illustrated. However, Collaert's versions all have in common the emphasis on a 'platform' of symmetrically arranged gemstones with pendant pearls and, secondly, on nude figures riding on these great monsters from the deep; one example (illus. in Horst Appuhn, ‘Renaissance-Anhänger’. Schmuckmuseum, Pforzheim, 1970, pl. 21) is both winged and has a strikingly similar neck, head and jaws, but none of the Collaert engravings indicate the use of 'baroque' pearls or enamelled strapwork motifs, such as occur on the Waddesdon pendant jewel.

Nevertheless, Dame Joan Evans, on the grounds of the Waddesdon jewel's similarity with these engravings (which she published as “by Erasmus Hornick, 1562”), illustrated this sea-dragon pendant and described it as “probably German, c.1575” (see Evans 1970, pp. 110-11, fig. 13, and pl. 79 a and b). Previously, Read (1902) had catalogued the jewel as “German, 16th century” quoting Plon (1883) who had compared it with the designs of Collaert, but it is interesting to note that Dalton (1927) had already begun to question this attribution and so had described it as “German or Spanish, 16th century”.