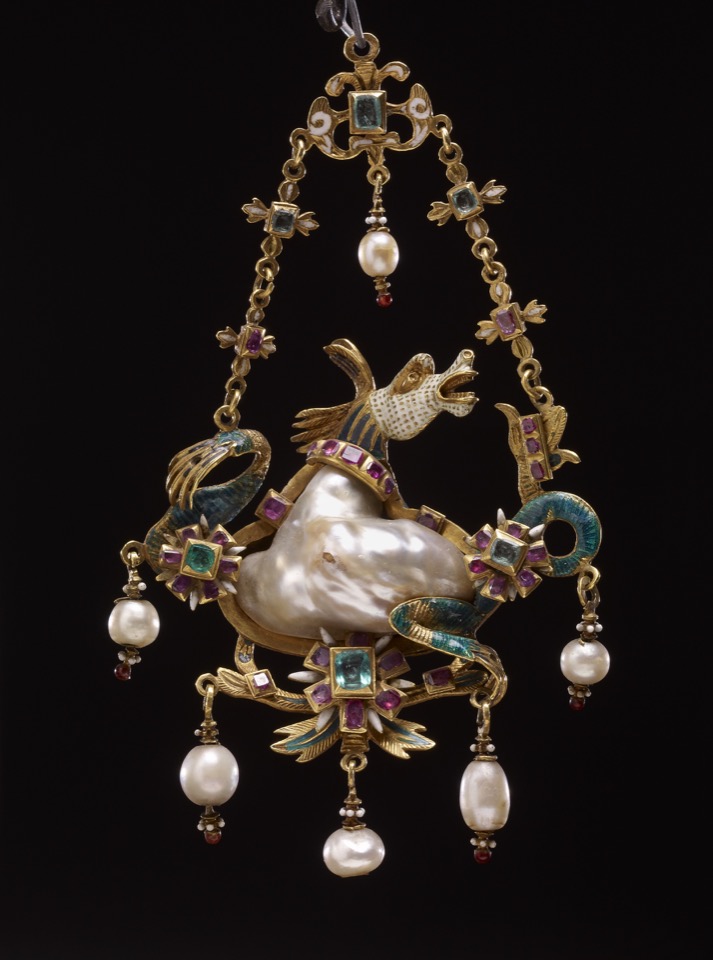 This jewel is recorded in 1857 as a Renaissance treasure. It may be genuine with later repairs, or it may have been made as new before 1857.

This object was previously owned by Londesborough, and collected and bequeathed to the British Museum by Ferdinand Anselm Rothschild.

Provenance: From the Collection of Lord Londesborough (before 1857).

Commentary: This hippocamp pendant jewel is an extremely puzzling piece because, in many respects, it is unlike any other extant Renaissance jewel, and yet it is equally unlike the documented specimens faked in the nineteenth century by Reinhold Vasters in Aachen; it may, however, have been altered in the Italian workshop that made (pre-1829) the phoenix jewel at Stowe (see Introduction, pp. 15-18).

Fairholt's publication of this jewel in 1857, when it was in Lord Londesborough's Collection in London, shows that it has not been altered since that date. However, it may be assumed that the six pendant pearls with their enamelled mounts could be early nineteenth-century replacements, since their survival in such good condition is unlikely when other parts of the jewel have been less fortunate. The application of the three rubies in a vertical line on the trefoil end of the tail seems clumsy and insensitive but perhaps was intended to disguise the loss of enamel in that area. The plain flat strip of gold framing the 'baroque' pearl is so exceptional a feature in a Renaissance jewel that it too may have been added to disguise damage or to strengthen the jewel; at the same time the two small square table-cut gemstones would have been attached to the upper part of the strip on either side of the 'baroque' pearl. The three star-shaped settings, each with seven gem-stones and pointed 'rays' of white enamel, are not affixed to the narrow plain strip of gold but to the tail, the limb and the 'swag' below. The enamelled decoration on the reverse of the lower 'swag' of foliate design matches that on the reverse of the two suspension chains, and they may not be original.

In Read 1902 this pendant jewel was catalogued as “German, late sixteenth century” and the same opinion was repeated in Dalton 1927. Most recently it has been illustrated in Hackenbroch 1979 (p. 326, fig. 860) as a Spanish jewel of the end of the sixteenth century, although it is quite unlike any of the other pieces illustrated in that section of her book; as the text contains no reference to this jewel and the grounds for the attribution are unrecorded, no weight can be attached to this attribution. Furthermore, there are no comparable pieces among the drawings for jewels in the Barcelona Llibres de Passanties nor, indeed, any comparable jewels illustrated in Priscilla E. Muller, ‘Jewels in Spain, 1500 – 1800’, The Hispanic Society of America, New York, 1972.

There is an exceptional character about the head of this hippocamp, with its almost cartoon-like expressiveness, that is strongly reminiscent of Bernardo Buontalenti's theatrical designs, especially the lively and humorous dragon, which he sketched in 1589 for the intermezzo ‘Apollo and the Python’, that was performed in Florence at the wedding celebrations of the Grand Duke Ferdinand I and his bride, Christina of Lorraine. Bernardo Buontalenti (1541-1608) served the Medici court as the chief adviser on all artistic matters, and it is interesting to see that he chose to capture in his drawing (now preserved in the Biblioteca Nazionale, Florence) the moment of surprise as the alerted python (or dragon) perceives Apollo's well-aimed arrow approaching. The head of the python is turned in profile, the jaws opened in dramatic response are tilted upwards, the ears(?) are erect like horns, and the long strands of hair around the neck wave like the fins of a sea-monster behind its head (Hackenbroch 1979, p. 32, fig. 56).

There is little doubt that these dragon-creatures of Buontalenti's creation caught the imagination of the Medici court and they recur, for example, on the handles and spouts of extremely rare pieces of contemporary Medici porcelain, like the ewer in the Museo Nacional de Arte Antiga, Lisbon. Unfortunately, few Italian Late Renaissance jewels have survived, but in the Museo degli Argenti, in the Palazzo Pitti, Florence, there is one pendant of a wounded stag that has all the qualities of a jewel produced in the milieu of the Medici court at the time of Buontalenti's artistic direction. This pendant is composed of a large 'baroque' pearl forming the body and hind-quarters of the seated stag; the enamelled arrow has just struck the animal and its enamelled head, turned in profile to the right, has the same startled expressiveness. Indeed, the large eyes and the erect antlers contribute to the alert and lively interpretation and, significantly, the jewel has not been altered and trivialised by the addition

One fully documented piece of enamelled gold in the form of a peacock's head and neck has survived on a lapis-lazuli vase in the Medici Collection in the Museo degli Argenti, in the Palazzo Pitti, Florence, and has been published by C. Willemijn Fock as the work of Hans Domes, begun in June 1577 and finished a year later (see Vases en lapis-lazuli des collections Médicennes du Seizième Siècle', in the ‘Münchner Jahrbuch der Bildenden Kunst’, XXVII, N.F., 1976, pp. 134 ff., figs 17 and 19). The ornate handle and foot which Hans Domes made for this vase have disappeared, but fortunately the small but very distinctive peacock mount enables the identification of this piece to be confirmed in the contemporary documents and subsequent inventories. The white-enamelled surface of the head and elegantly curving neck is broken by innumerable short strokes (or dashes) of gold in parallel curving lines - a more elaborate version of the treatment of the Waddesdon hippocamp's head. The finely chased peacock mount is attached to the lapis-lazuli body by two enamelled writhing fish or dragon tails ending in a trefoil or tripartite 'tuft'. Hans Domes, like Jacques Bylivelt, came from the Netherlands and worked under Buontalenti's supervision at the Medici court, but little is known about his earlier work. However, this important tiny masterpiece provides crucial evidence of the fashion prevailing in Florence in the late sixteenth century and of the quality and technical skills of these northern goldsmiths who had been trained in the Netherlands.

The attribution of the Waddesdon hippocamp to Italy can only be tentatively made because of the lack of comparable works of indisputable Italian or Netherlandish origin. Indeed, the problem is made more difficult because the precise original state of the Waddesdon hippocamp jewel is uncertain, although to some extent it may be deduced from a similar but unaltered jewel that has been preserved in the Danish Royal Collections and can today be seen in Rosenborg Castle in Copenhagen (illus. in Hackenbroch 1979, fig. 446, and described simply as “Southern Germany, 1570-80”). The particular way in which this jewel is constructed around the 'baroque' pearl is relevant, especially the attachment of enamelled gold openwork scrolls around the lower part of the 'baroque' pearl and the embellishment of them with three clusters of gemstones. The Rosenborg Castle jewel, which also has many unrelated features, such as the putto astride the monster and the inclusion of an earpick and a toothpick, has no known author, although tradition has always been inclined to link it with the workshop of Corvinianus Saur, the German goldsmith who left Augsburg to settle at the court of Christian IV of Denmark. However, in 1965 Yvonne Hackenbroch proposed that it was the creation of Giovanni Battista Scolari, a goldsmith from Trento who settled at the court of the Dukes of Bavaria in Munich from 1567 to 1583 (see Jewels by Giovanni Battista Scolari, ‘The Connoisseur’, July 1965, pp. 200-5, fig. 12). In her 1979 publication of this jewel she does not discuss her reasons for abandoning this attribution but she does state (p. 166) that the jewel “can be considered in association with this house altar”, that is, the famous house altar made by Abraham Lotter the Elder (d.1612) for Albrecht V of Bavaria and his consort, Anna, in 1573-4 and which is still one of the great wonders of the Schatzkammer der Residenz in Munich. The connection between the Rosenborg jewel and the house altar is neither analysed nor discussed; as it does not seem particularly compelling, the argument for a “Southern Germany, c. 1570-80” attribution remains unresolved.

There is, however, a close relationship between the Rosenborg jewel and the Palazzo Pitti's similarly shaped 'baroque' pearl pendant jewel depicting two characters from the commedia dell'arte, serenading lovers seated in the gold and pearl gondola (illus. in Kirsten Aschengreen Piacenti, ‘Capolavori del Museo degli Argenti’, Florence, 1969, no. 108), where it is pointed out that the flowering lily of Florence (at the top) supports the assumption that the jewel was made at the Florentine court of the Medici, albeit by a northern goldsmith, towards the end of the sixteenth century. The difficulty of identifying the jewellers, whether Italian, Netherlandish or German, who were working at the Medici court at this time, is so great that it may never be resolved but in many respects that is less important than establishing the designer's name, his patrons, court circles and milieu. If the commedia dell'arte jewel (in the Museo degli Argenti, Palazzo Pitti) is a product of the Medici court in Florence, then both the toothpick 'baroque' pearl jewel in Rosenborg and the hippocamp jewel in the Waddesdon Bequest can be considered as companion pieces that might have originated in those Florentine workshops.

The Waddesdon hippocamp jewel may have slightly changed its character when it was sent to the jewellers to be strengthened and repaired but at least it was not completely refashioned, as so often happened to the grander pieces of jewellery in the past.