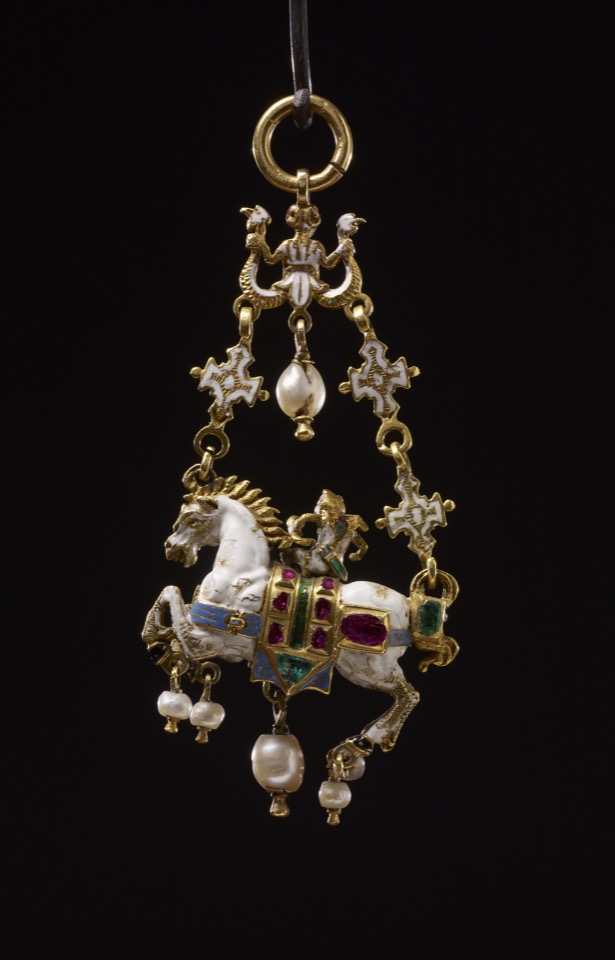 Commentary: The subject of Cupid shooting his arrows was a popular theme in Renaissance art and occurs in endlessly varied forms in the minor arts, not least in the field of jewellery and goldsmiths' work. Examples have been preserved in the Danish Royal Collections (no. 603; attributed to Corvinianus Saur, c. 1600), in the Hermitage, Leningrad, and elsewhere.

Among the Renaissance jewels in the Hapsburg Imperial Collections in the Kunsthistorisches Museum, Vienna, is a delightful version of this subject of Cupid on horseback shooting arrows with his bow (illus. in Hackenbroch 1979, fig. 694, where it is attributed to “The Netherlands, c. 1590”, though without comment or any firm evidence). Although the Cupid on the Vienna jewel turns his head in the opposite direction, his body sits sideways on the horse in exactly the same pose. The horse, however, is very different with gold 'dots' showing through the white enamel over its entire body; furthermore, it is represented trotting sedately, with its long tail hanging down. The harness is similarly gem-encrusted - also the horse's forehead - whilst pendant pearls hang from the hooves, the tail and the girth under the belly. The two suspension chains are attached in the same way, and the chains (of uneven length) are composed of gem-set sexfoils, with a small gem-set 'cartouche' of a scrollwork pattern at the top.

The fashion for attaching pendant pearls to the hooves or feet of an animal is to be seen again on a beautifully modelled Pegasus and lion pendant in the Medici collections at the Palazzo Pitti, Florence; the galloping Pegasus with its wings outstretched is an incomparably finer work attributed to a Netherlands goldsmith, working at the Medici court “c. 1575” (see Hackenbroch 1979, fig. 681). However, the origin of many of these realistic but gentle animal pendants is problematical, though the white-enamelled stag in flight pendant, which is preserved in the Grünes Gewölbe, Dresden, and is studded with diamonds and rubies, appears to derive, perhaps even directly, from the woodcuts of the Nuremberg artist, Jost Amman (1539 - 91), for a fuller discussion of whose work see cat. no. 10 (pp. 98 - 100) [WB.177]. Although his influence on the design of the Waddesdon jewel cannot be precisely demonstrated, it seems likely that the Nuremberg attribution, first proposed in Read 1902 and more tentatively repeated in Dalton 1927, may be correct, for this jewel has many of the features that characterise the almost 'anecdotal' quality of Jost Amman's subjects and the jewels that his woodcuts appear to have inspired.