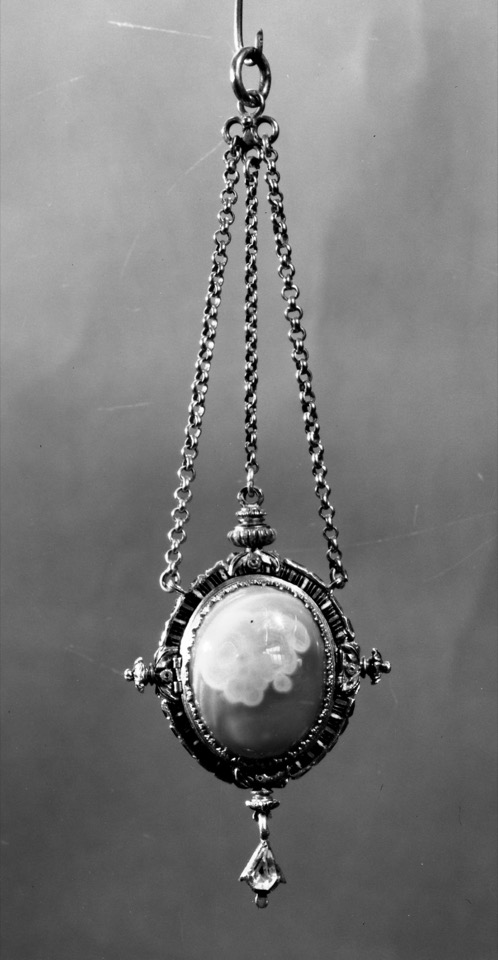 Bead, Moses and the Tablets of the Law

Origin: Uncertain; perhaps French, apparently much modified. The pendant drop, chains and 'cartouche' are 19th-century additions; the figure may not be original.

Commentary: There are a number of similar agate beads with gold mounts designed to open in this fashion and to reveal a single figure or, more exceptionally, a miniature scene. The best documented example that has survived is in the Imperial Hapsburg Collections in Vienna; it is the famous onyx rosary of the early sixteenth century which

was recorded in the Schatzkammer Inventory of 1750 (no. 17) and has been fully described and illustrated in F. Eichler and E. Kris, ‘Die Kameen im Kunsthistorisches Museum’, Vienna, 1927, pp. 166-8, no. 390, pl. 54, fig. 72. The ten oval onyx beads in gold enamelled mounts are of a similar size and open to reveal a single figure in each half of the bead; these twenty figures are shell cameos carved in relief. The effect, however, is comparable to that of the Moses figure in the Waddesdon agate bead because in most cases the single figure is represented standing motionless and holding the appropriate attribute. Significantly, all the figures are either Apostles or, like St Veronica, part of the story of the Passion of Christ. Similarly, the larger paternoster bead opens to reveal scenes from the New Testament (the Life of the Virgin), even more splendidly worked, including two gold enamelled scenes executed in the translucent email en basse taille technique. In 1927 this rosary was tentatively attributed to a French workshop.

Another rosary in the Pierpont Morgan Gift of 1917 to the Metropolitan Museum of Art, New York, is composed of nine oval agate beads that open to reveal scenes, chiefly from the Infancy of Christ, all executed in enamelled gold with the figures in relief against a three-dimensional setting (G.C. Williamson, ‘Catalogue of the Collection of Jewels and Precious Works of Art, The Property of J. Pierpont Morgan’, London, 1910, pp. 24-6, no. 13, pls 8-9; also, a virtually illegible photograph in Yvonne Hackenbroch, ‘Renaissance Jewellery’, Sotheby Parke Bernet Publications, London, New York and Munich, 1979, p. 315, fig. 823, where it is attributed to “Spain, c. 1510”.) There is a second rosary of similar character but complete with ten oval agate beads, a larger paternoster and a pendant cross - all made with gold enamelled mounts but with the scenes of the Passion of Christ inside the beads executed in pierced openwork reliefs without any backgrounds; it is preserved in the Musée du Louvre (see J. J. Marquet de Vasselot, ‘Orfèvrerie, Emaillerie et Gemmes’, Paris, 1914, p. 53, no. 284; illus. in colour in ‘The Great Book of Jewels’, eds E. and J. Heiniger, Lausanne, 1974, pl. 197). Both these rosaries lack a provenance; indeed, neither may be older than the nineteenth century, for both on technical and stylistic grounds they give rise to serious doubts about their authenticity.

A single bead of agate that has survived as a pendant jewel with three enamelled chains and a jewelled 'cartouche' is of greater relevance; it was sold at Christie's in 1961 without any provenance and was published soon afterwards as belonging to the tiny group of English mid-sixteenth-century jewels with figure scenes (see Hugh Tait, Historiated Tudor Jewellery, ‘Antiquaries Journal’, 1962, vol. XLII, pt. II, p. 226 ff., pl. XLVI, a; and more recently, A Somers Cocks and C. Truman, ‘The Thyssen-Bornemisza Collection’, London, 1984, p. 72, no. 4). This gold mounted spherical agate bead is different in its construction: the front half of the sphere opens in two equal segments to form a hinged triptych. It is unique in this respect. The central concave roundel contains a three-dimensional representation of the crowded Nativity scene with the Adoration of the Shepherds, whilst the left-hand 'wing' of the triptych has the Angel of the Annunciation in relief and the right-hand 'wing' has the kneeling Virgin, also in high relief, with the prie-Dieu in the background. This highly ambitious piece reveals strong Continental influences, as would be expected in England in the reign of Henry VIII and Mary Tudor, when goldsmiths and jewellers from the Netherlands are known to have been working in London and receiving Court patronage. In the 1984 publication of this unique pendant bead attention was drawn to the listing of similar devotional objects in the 1560 Inventory of the Jewels of the French Crown, but there is no indication where these pieces were made nor is there any suggestion that they were mounted as pendants. Nevertheless, it is helpful to quote all four related entries:

The last two entries, one with the Crucifixion and one with Notre Dame de Pitie, may be the remaining fragments of two separate objects, although there is no suggestion that they are incomplete; indeed, no. 554 is said to open although it is only a 'demye pomme'. The first two (nos 551 and 553) in this 1560 Inventory seem to be listing beads of the type that were used for the grand rosaries, but that is not to say they could not have been mounted as devotional pendants, if fashion so demanded. Their use is not made clear in the 1560 Inventory. The unprovenanced example that opens like a triptych could have been subsequently adapted to become a pendant, because the design of the gold enamelled chains and gem-set 'cartouche' is not en suite with the agate bead and, indeed, appears to be of later date. The triptych bead, it must be emphasised, is enriched with gold mounts set with table-cut rubies - a most exceptional feature for an agate bead of this type.

Apart from the last-mentioned, all the surviving examples have New Testament figures or scenes inside the beads of hardstone. The figure of Moses would, of course, be wholly inappropriate in a rosary bead and, no doubt, it is for that reason that the earlier publications of this piece have described it as a locket. Indeed, a jewel with the figure of Moses holding the Tables of the Law would not seem to be out of keeping with Renaissance practice; for example, in England the 1542-6 Inventory of Jewels belonging to Princess Mary, daughter of Henry VIII, included “Oon Broche of golde of the History of Moyses set with ii little diamonds”, whilst the 1560 French Royal Inventory lists a hat-jewel: “Une enseigne d'une Moyse garny de tables de diamantz, estimee LX.” However, an examination of the interior of this bead reveals that the opaque blue enamel on the mount has been damaged on either side of the projecting tiny platform that supports the figure of Moses. The suggestion is now tentatively made that the platform and the figure of Moses have been inserted more recently and the bead converted into a pendant locket.

Finally, it should be noted that the gold enamelled pendant below this agate bead with Moses is stylistically unrelated to the rest of the pendant. Not only is its shape unparalleled in Renaissance jewellery but the enamelled decoration on the reverse is of a much later period. The faceted stone in this little pendant drop is not a diamond (as previously published) but a rock-crystal variety of quartz. It seems probable that the pendant drop was added when the agate bead was converted into a pendant locket and the figure of Moses was inserted.