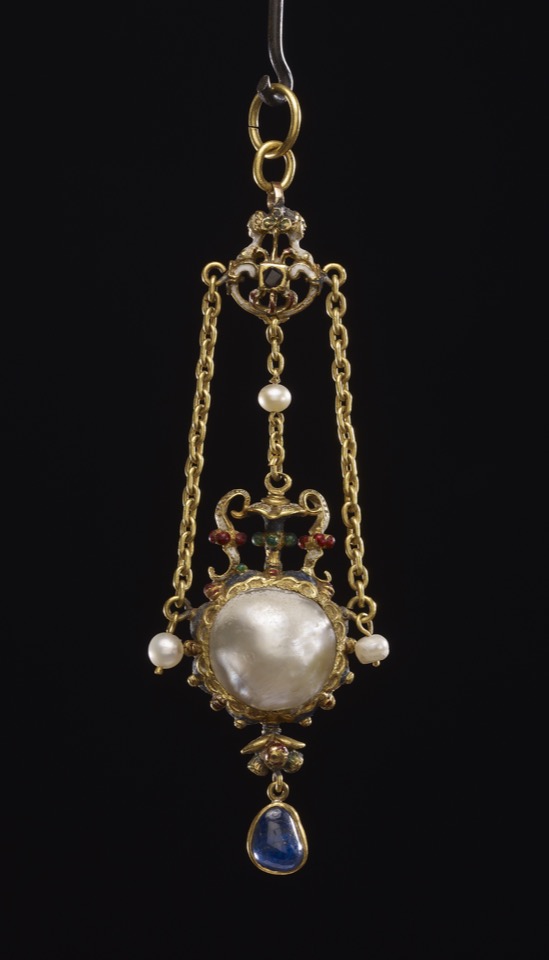 Pendant jewel; gold; form of two-handled vase, circular body formed of baroque pearl on one face, other of gold engraved with crane among scrolls; hangs from three chains from open-work cartouche in form of two busts, back to back, enamelled and jewelled; pendant sapphire.

Commentary: The attribution “German, early seventeenth century” published in Read 1902 was repeated in Dalton 1927, but the antiquity of this pendant is seriously in doubt and a nineteenth-century origin, perhaps in a Paris workshop, is here suggested.

The central part of the pendant - the quasi-vase form set with part of a large 'baroque' pearl - does not seem to be closely paralleled. The creation of pendants of vase-like form does seem to have been well-established in Spain; there is, for example, in the Barcelona Llibres de Passanties an apprentice's drawing dated 1551 (folio 162) that shows a vase of this pseudo-classical shape with two prominent s-scroll handles on either side of a stoppered neck and spreading lip. The incorporation of part of a 'baroque' pearl could be seen as an indication of a later - but still very Spanish - fashion.

However, the most unexpected alteration in design is the replacement of the stem and foot of the vase by a pendant with the bunch of fruit immediately beneath the hemispherical pearl. This last-mentioned feature does not seem to be consistent with Renaissance taste or design and effectively destroys the conception of the jewel as a miniature vase created around a 'baroque' pearl.

Neither the triple chain arrangement nor the attachment of the rings on either side seems to be executed to the normal standard of a Renaissance workshop. Consequently, these clumsy additions of the nineteenth century have been taken as an indication that the central part of the pendant is somewhat older.

An examination of the engraved and enamelled roundel (on the reverse) does little to restore confidence in the reputed sixteenth-century origin of this jewel. The design of the fantastic bird amidst a riot of curling scrolls of vaguely foliate form is exactly paralleled on a miniature case (width 2.7 in) which was formerly in the Pierpont Morgan Collection and is now in the Metropolitan Museum of Art, New York (Inv. no. 17.190.1003). This gold miniature case was published in Joan Evans, ‘A History of Jewellery, 110-1870’, London, 1953 (rev. edn 1970), pp. 29, 127, pl. 105b; the text refers to the wrong illustration and misleadingly states that it is in the Victoria and Albert Museum. In fact, the Metropolitan Museum has not had this miniature case on display for some years because of the many grave doubts concerning its age that have been expressed. Indeed, the champlevé enamelling is poor quality, although it is rather better preserved than on the tiny roundel on the reverse of the jewel. Significantly, both sides of the gold miniature case are decorated in the same distinctive manner, which Joan Evans stated was “in the manner of Mignot, C.1610” (p. 29).

There are, indeed, French engraved designs for jewellery of the first quarter of the seventeenth century which could have been the sources used by this goldsmith when decorating both the miniature case and the reverse of this pendant jewel. An engraved design dated 1619 in the British Museum (Reg. no. 1976,0925.7) is no. 12 of a series produced by Pierre Nolin. All the elements of that distinctive enamelled decoration can be detected within the more restrained and gifted design of this print. Another print of about the same date by Corvinianus Saur, the German who was appointed court goldsmith in 1613 by King Christian IV of Denmark, shows how popular this type of thin scroll pattern, asymmetrical and full of movement, had become, especially when used in association with these exotic pecking birds. This print is also in the British Museum (Reg. no. 1905,0902.15). However, no example of this type of decoration, executed in champlevé enamel, has yet been found on jewels of documented provenance or sufficiently high technical and artistic quality to refute the current opinion that these works are no older than the nineteenth century.