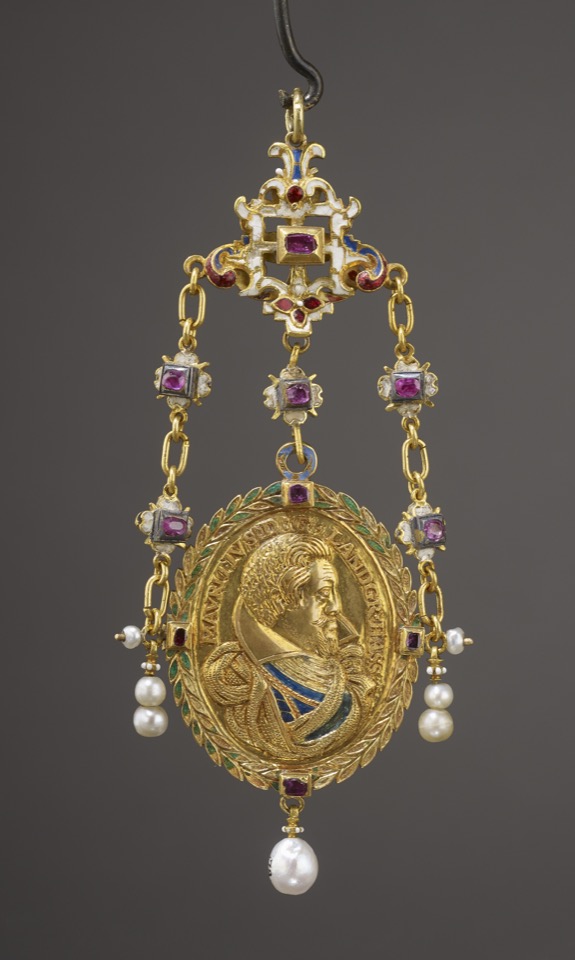 The medal shows Maurice, Landgrave of Hesse- Kassel in the Holy Roman Empire, with his second wife, Juliana. They married in 1603. Known as ‘Maurice the Learned’ he was a great art patron. His court art collection, or Kunstkammer, was a model for the Rothschilds in the 19th century.

A very similar gold piece, with traces of the original green enamel, is in Stuttgart (pub. in Julius Ebner, ‘Katalog der Ausstellung deutscher Renaissance-Medaillen’, Esslingen, 1909, no. 170; also Lore, Börner, ‘Deutsche Medaillenkleindode des 16. und 17. Jahrhunderts’, Leipzig, 1981, no. 64, pl. 38). It has no suspension loops, no chains and no 'cartouche'. The surface of the Waddesdon version is elaborately chased and tooled; indeed, the goldsmith has introduced a number of 'improvements' to the hair, collar and dress of Juliana. The high coiffure of the Stuttgart version has been reduced and a pricked scroll has been introduced by the goldsmith along the top, as well as several additional jewels in the hair. The jewel on the corsage has been given more prominence by the introduction of enamel, but the four gem-stones on the frame are far more eye-catching than the five-petalled flowers on the Stuttgart example.

A lead version preserved in the Department of Coins and Medals in the British Museum has a single pendant loop. The bust of Maurice of Hesse-Cassel differs in only very minor details, such as the treatment of the hair; although it is brushed back from the forehead in the same way, it is shown falling in locks to reach just over the collar, which is more square and slightly later in style. There are slight changes in the drapery over the armour, but in all essential features it is the same as the gold version in the Waddesdon Bequest.

The enamelled suspension loop at the top of the laurel wreath is clearly original; similarly, the smaller loop at the bottom of the laurel wreath was enamelled and is original. However, the two gold wire rings soldered on to the sides of the laurel wreath do not have the same quality of workmanship and could have been added later when the triple suspension chains were added. There is no other ‘gnadenpfennig’ recorded with triple suspension chains attached in this way; the two outer chains are normally affixed to loops higher up (at approximately eleven o'clock and one o'clock). Because the outer chains are attached to the sides of the medal, a much wider 'cartouche' at the top has had to be introduced so that the chains rise almost vertically and thus avoid rubbing the laurel-wreath frame. The wide 'cartouche' is, however, most curiously constructed of two separate and different openwork designs, placed back to back, and joined together by, for example, the central gold pin that fastens the table-cut ruby to the front of the 'cartouche'. The scroll design of the openwork design on the reverse of the 'cartouche' does not correspond with the openwork of the more rectangular strapwork design on the front of the 'cartouche'. This feature is so exceptional that a nineteenth-century date for the union of these two separate openwork 'cartouches' seems likely, even though the two 'cartouches' themselves apparently date from the Late Renaissance. It would seem, therefore, that originally this ‘gnadenpfennig’ probably did not have a triple suspension chain arrangement, nor any pearls on either side, but belonged to the same class as, for example, the circular ‘gnadenpfennig’ of Albrecht VI der Leuchtenberger von Bayern (1584-1666). This portrait medal is preserved in the Munzsammlung in Munich and has four table-cut gemstones ornamenting the gold and green-enamelled laurel-wreath frame (illus. in Börner 1981, no. 31 d, pl. 20).

For another gold portrait medal framed with an enamelled wreath of laurels and intended to be worn as a pendant jewel, compare the 1627 ‘gnadenpfennig’ of Frederick of Bohemia (see Hugh Tait (ed. And contrib.), ‘The Art of the Jeweller, A Catalogue of the Hull Grundy Gift to the British Museum: Jewellery, Engraved Gems and Goldsmiths’ Work’, London, 1976, p. 184, no. 300); it also has an integral enamelled pendant loop (at the top) and another smaller one (at the bottom) and was not designed to have a triple chain arrangement. The medal bears the date 1627, by which time Frederick V, King of Bohemia and Count Palatine, was living in exile, having established his court in The Hague; consequently, this ‘gnadenpfennig’ may have been made by a Dutch goldsmith, although the style is in the strict German tradition.

For a further note on these ‘gnadenpfennige’ see WB.180.