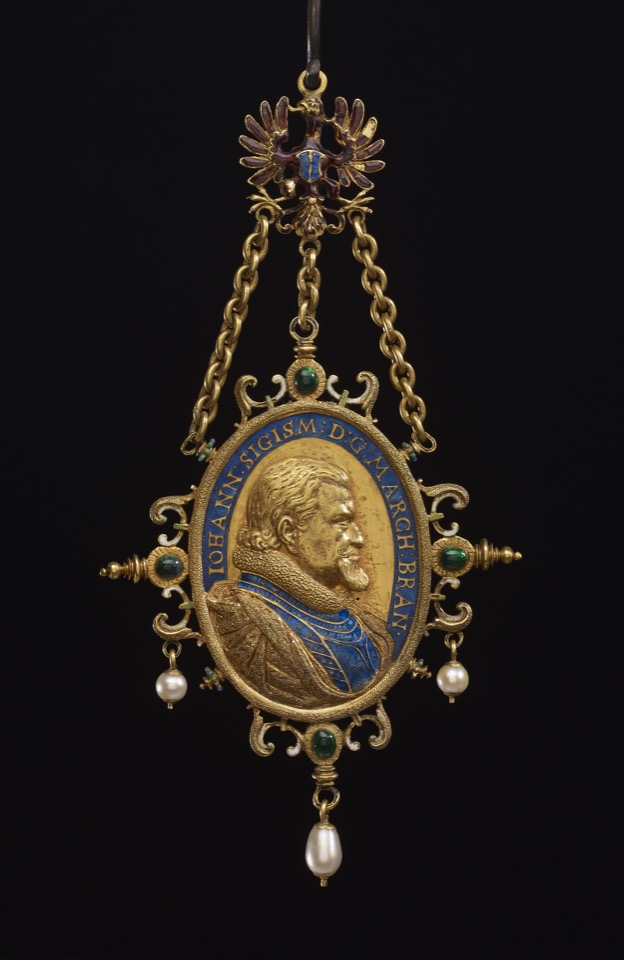 In the centre is Johann Sigismund, elector of Brandenburg (1572–1619). From 1615 he allowed both Lutheran and Calvinist worship in Brandenburg.

Commentary: The medal is discussed in Julius Menadier, ‘Schaumünzen des Hauses Hohenzollern’, Berlin, 1901, no. 94, and appears to date from the period when Johann Sigismund was Elector of Brandenburg (1608-19). Johann Sigismund was born in 1572, the eldest son of Joachim Friedrich (Administrator of Magdeburg and, from 1598, Elector of Brandenburg). His wife, Anna, was at the centre of the conflict over the successor to Duke William of Julich-Cleves, and consequently Johann Sigismund had an important political role to play in that struggle during the last decade of the sixteenth century which brought the great powers to the very brink of major hostilities. In 1608 he succeeded as Elector of Brandenburg and, in the following year, joined the Protestant Union along with the Landgrave Maurice of Hesse-Cassel, who had openly adopted Calvinism in 1609 and was a pensioner of France (see WB.173). Johann Sigismund's daughter, Maria Eleonora, was married to Gustavus Adolphus (1620) and another daughter, Katherine, to the Prince of Transylvania, Gábor Bethlen, in 1625 (see WB.197).

Another ‘gnadenpfennig’ depicting Johann Sigismund facing right is preserved in Berlin (see Börner 1981, no. 42, col. pl. 27). The armour is similarly enamelled but not the ground of the inscription; on the reverse the 'sceptre-shield' in the elaborate quartering of the coat of arms is also enamelled in blue. The 'cartouche' at the top of the three chains is also an eagle with outspread wings, though set with an amethyst in the centre; the enamelled frame is set with diamonds and rubies.

For a further note on these gnadenpfennige, see WB.180.