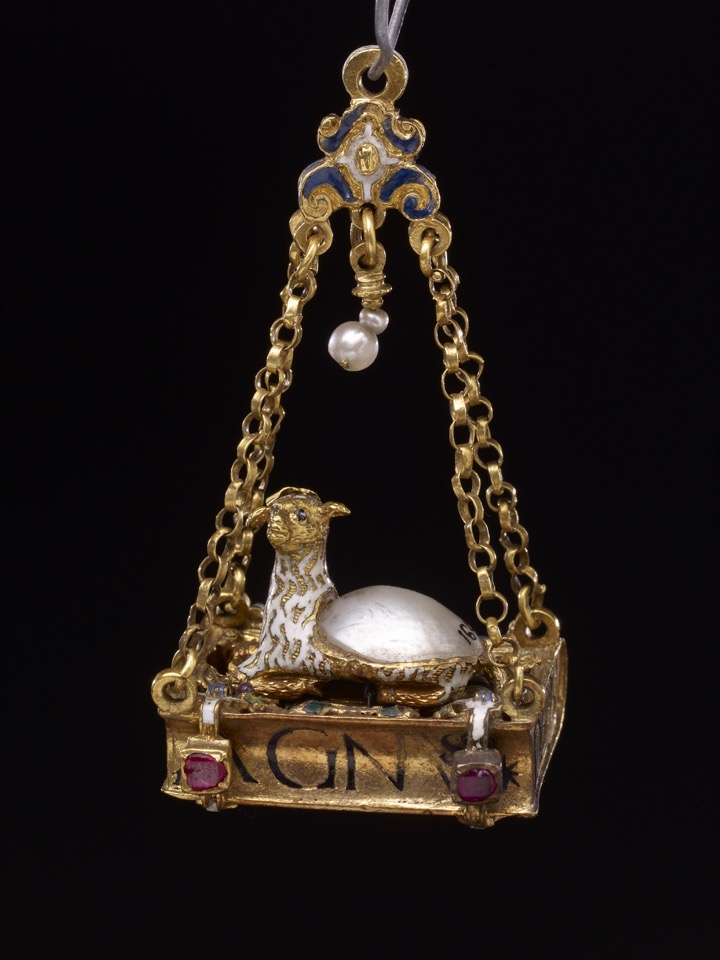 Commentary: The Llibres de Passanties in Barcelona contain apprenticeship drawings that demonstrate the early seventeenth-century fashion in Spain for jewels of this kind; in particular, folio 385 has a design for an Agnus Dei pendant by Agosti Castello dated 1609 (not dated '1593', as stated in Yvonne Hackenbroch, ‘Renaissance Jewellery’, Sotheby Parke Bernet Publications, London, New York and Munich, 1979, p. 336, fig. 899). Agosti Castello has placed his Lamb on a richly patterned textile, which is knotted at the four corners and has four suspension chains united in a 'cartouche' with a central pendant pearl hanging above the Lamb.

Curiously, the closed book with handsome covers was a popular subject on its own among Spanish jewellers from the first half of the sixteenth century. Two later drawings in the Llibres de Passanties in Barcelona confirm the continuing fashion for these small gold enamelled pendants in the form of a closed book with elaborate strapwork covers and jewelled clasps: folio 401 is dated 1613 and was submitted by Mateu Torent; folio 410 is dated 1616 and is the work of Joseph Jordan. An extant gold enamelled version, with gem-set spine and covers, is illustrated in Priscilla E. Muller, ‘Jewels in Spain, 1500 – 1800’, The Hispanic Society of America, New York, 1972 (p. 70, fig. 98), and another was found in 1968 in the wreck of the Girona, one of the ships of the Spanish Armada which, under the command of Fabricio Spinola, escaped from the guns of the English fleet only to be destroyed on the rocks of the Antrim coast of Northern Ireland on 16 October 1588. This gold pendant book (with its tiny internal compartments) is now preserved in the Ulster Museum, Belfast. The little compartments may indicate that this small book was used as a sacred container for the pascal waxes of the Agnus Dei, blessed by the Pope at Easter in the first year of his Pontificate and on every succeeding seventh year (L.N.W. Flanagan, ‘The Wreck of the Girona’, Ulster Museum, Belfast, 1973, p. 3, where it is described as 'a Reliquary').

The style of the openwork strapwork covers of the Waddesdon Ecce Agnus Dei book corresponds so closely with the Barcelona drawings and the two other extant examples that the present attribution to Spain c. 1600-20 seems fully justified, despite the tentative attribution in Read 1902, “? French, 16th century”, also repeated in Dalton 1927. Representations of the Lamb of God seated on a book were part of the standard iconography, especially in Spain, and a pascal wax oval 'seal' dated 1677 is preserved in the Museo Episcopal in Vich, Spain (illustrated in Muller 1972, p. 73, fig. 104). It depicts the Agnus Dei seated on a closed book with two prominent clasps and the name of Pope Innocent XI in the encircling inscription; it was issued during the Pontificate in 1677.