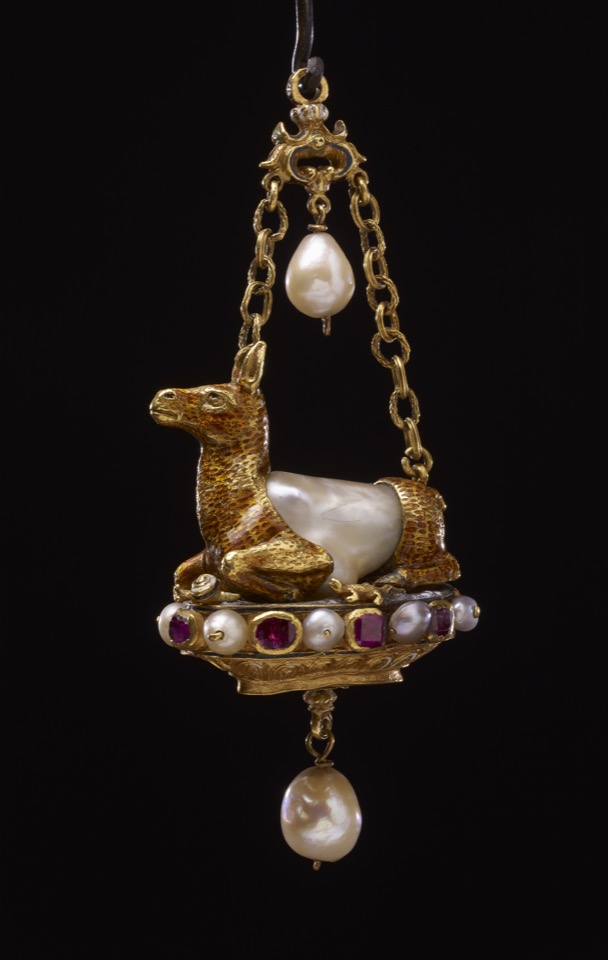 This object was previously owned by Londesborough, and collected and bequeathed to the British Museum by Ferdinand Anselm Rothschild.

Provenance: Unrecorded, although in Read 1902 it was categorically stated that this jewel was "From the Londesborough Collection". It is not published in F.W. Fairholt, ‘Miscellanea Graphica, Representations of ancient, medieval and renaissance remains in the possession of Lord Londesborough’, London, 1857.

Commentary: Although this jewel has previously been given the attribution “German about 1600”, first published in Read 1902 and repeated in Dalton 1927, the evidence of the drawings in the Llibres de Passanties of Barcelona, especially those dating from the 1590s and the first decade of the seventeenth century, would suggest that this type of pendant jewel was fashionable in Spain.

The evidence of the designs in the Llibres de Passanties (especially folio 317 dated 1593, folio 344 dated 1599, folio 359 dated 1603 and folio 385 dated 1609) is interesting because it shows that as soon as the idea of placing the animal on a cushion or mat was introduced (after 1593), then the suspension chains were increased to four and were attached to the cushion or mat - not to the animal itself, as had been the custom in earlier drawings such as that of 1591 depicting a camel pendant by Bennex Bussot (folio 307). The latter shows that, even though there is no cushion or mat, the camel is represented lying down with its legs arranged in very much the same way as the Waddesdon couchant hind. An extant version of this type of camel pendant jewel can be seen in the Walters Art Gallery, Baltimore (see Diana Scarisbrick, in ‘Jewellery, Ancient to Modern’, exh. cat., Walters Art Gallery, Baltimore, 1979, no. 523, col. pl. 188).

In the case of the Waddesdon couchant hind pendant, however, it must be noted that the cushion or base does not project as far outwards around the hind as in the Barcelona drawings, and there is the possibility that the hind was originally without any base at all. The design of the lower part of the base is not entirely convincing as a work of the early seventeenth century, although it is unrelated to that designed by Reinhold Vasters in his Aachen workshop (now preserved in the Victoria and Albert Museum, E. 2818-1919). The jewel made from that Vasters design in the nineteenth century is in the Linsky Collection but was illustrated as a Spanish jewel “1580-1590” in Hackenbroch 1979 (no. 908, p. 338). Another similar jewel with a different animal but exactly the same cushion design in the lower zones was in Lord Astor's Collection (sold at Christie's, 27 November 1979, lot 170). Both the Astor jewel and the Linsky pendant (see Clare Vincent, in ‘The Jack and Belle Linsky Collection in the Metropolitan Museum of Art’, New York, 1984, no. 114, where it is dated “ca 1870-95”) correspond with the Vasters drawing (‘Princely Magnificence, Court Jewels of the Renaissance, 1500-1630’, ed. A. Somers Cocks, exh. cat., Victoria and Albert Museum (Debrett’s Peerage Ltd), London, 1980, H 20, HG 4).

No such similarity exists between the base (or 'platform') of the Waddesdon hind pendant and the Vasters drawings. Its relative simplicity should be contrasted with the extremely grandiose couchant hind pendant jewel in the Thyssen-Bornemisza Collection at Lugano, which was published as “Spanish, c. 1580” in Hackenbroch 1979 (no. 902, p. 337), and which has most recently been catalogued as “Spanish, circa 1570” on the basis of its strapwork ornamentation being closest to designs in the Llibres de Passanties of the 1560s and 70s (see Somers Cocks 1984, p. 84, no. 9). Unfortunately, in neither publication is there any illustration of the underside of the 'platform', nor any detail views of the hook( ?) on the animal's head. Although both Hackenbroch and Somers Cocks relate the Lugano jewel to the drawings in the Llibres de Passanties depicting animals seated on cushions, they do not comment upon the complete absence of any drawings incorporating 'platforms' or cushions of this elaborate form and heavy strap-work design - a feature so beloved by Vasters and so conspicuous among his drawings.

It is very important that the suspension chains do not rub against the animal because any friction will quickly damage the surface. There were two solutions: on the one hand, this kind of jewel could be so designed that the mat or cushion 'platform' projected far beyond the animal placed upon it and, consequently, four suspension chains could be attached to the edges of the cushion and so not touch the animal. The Barcelona drawings indicate that the Spanish apprentices favoured this solution. On the other hand, this kind of jewel could also be designed so that its cushion or 'platform' did not project beyond the animal, thereby creating a more integrated, neater-looking jewel; with this tighter form of design, two suspension chains would have to be attached to the animal - not to the cushion or 'platform'.

At least one designer north of the Alps preferred the second solution. He was Assuerus van Londerseel (1572 - 635), whose set of engraved designs for twelve pendants was published in Antwerp at the beginning of the seventeenth century. In this example the chains for suspension are attached to the recumbent animal - between the ears and above the tail. His 'platform' elements are certainly more elaborately conceived than the Waddesdon example, but van Londerseel has greatly 'scaled down' the extravagant gem-studded versions of Hans Collaert's 1582 engravings. Indeed, the weakness of Collaert's designs was the disproportionate size of the animal in relation to the ‘platform’; van Londerseel has resolved this problem and produced a more unified composition, albeit far grander than the Waddesdon couchant hind jewel. No doubt there were others whose designs were even more practical - and, in consequence, more modest. One of them, perhaps a member of the school of Antwerp Mannerist jewellers, may have been responsible for this Waddesdon pendant in its entirety - including that rather unexpected oval radiating design in relief on the underside - but it is probably a later 'marriage'.