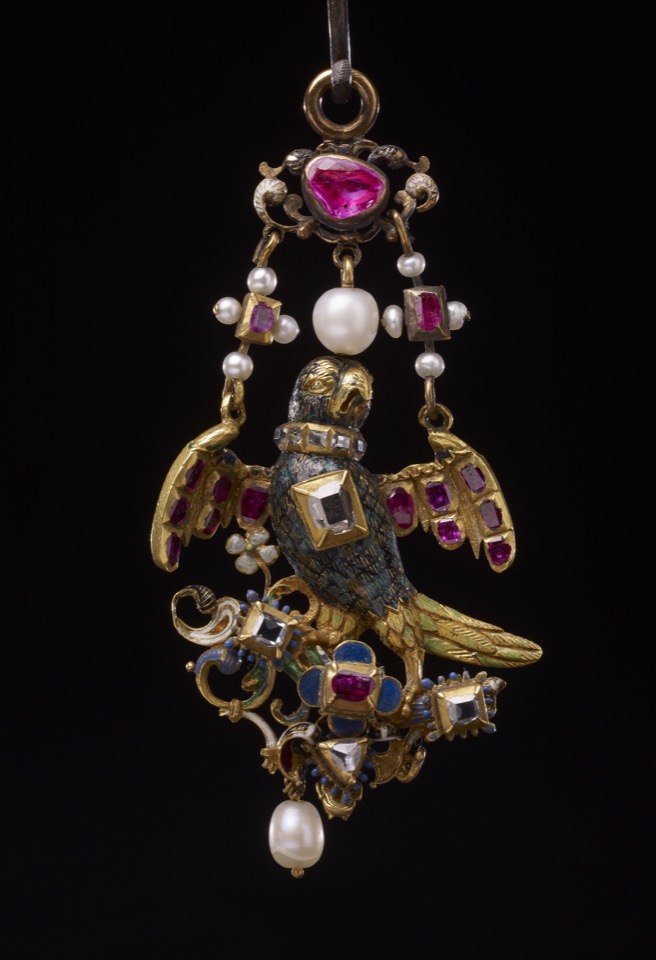 Pendant jewel; gold; hawk with outstretched wings, standing on branch from which spring enamelled scrolls, and with four raised settings with diamonds and a ruby; body enamelled green with diamond set in breast; wings studded with rubies; collar of diamonds; short suspension chain with rubies and pearls.

Commentary: Undoubtedly, one of the most comparable 'bird' jewels would seem to be the pendant lent to the 1884 Budapest Great Exhibition (see Pulszky, Radisics and Molinier, ‘Chefs d'oeuvre d'orfèvrerie’, 2 vols, Paris, 1884-6, pp. 17-18, with illustration; reproduced in Tait 1986 on p. 101 (fig. 91) because the present whereabouts of the jewel has not been traced). From the 1884 ‘Catalogue’ illustration the bird appears to be a hawk with a very similarly modelled head, a diamond collar around the neck and gem-set breast, and similar feathered legs and claws gripping a branch; its wings are closed and the tail is straight.

The 1884 Budapest Exhibition jewel is catalogued without any owner's name or provenance, but for a discussion of the likely Hungarian origin of a group of jewels similar to this 1884 Budapest Exhibition hawk pendant see cat. no. 10 (pp. 100-2) [WB.177]. Also discussed in the commentary of cat. no. 10 (p. 102) is the extremely rare use of the four-petalled, single flower on a stem, which is such a prominent feature of the Conyngham/ Waddesdon hawk jewel. Similarly, the pronounced asymmetrical quality of the design of the scrollwork seems to be a characteristic feature of this group of jewels with openwork designs, many of which have been shown to have Hungarian associations.

Although the Waddesdon hawk jewel has most recently been published as “Vienna or Prague, c. 1600” (see Hackenbroch 1979, fig. 514), the attribution is not discussed in the text and no comparable items of documentary significance have been illustrated to support that attribution. In Read 1902 it was described as “French, 16th century”, but although this view was repeated in Dalton 1927 no reasons were given in either edition, and at present there is no documentary evidence to help sustain this attribution. Fortunately, many of the fashionable Spanish 'bird' pendants (including the Pelican in its Piety and the purely decorative 'parrots') are reliably documented: in the Treasury of the Cathedral of the Virgin of the Pillar, Saragossa (see Charles Oman, The Jewels of Our Lady of the Pillar at Saragossa, ‘Apollo’, June, 1967, pp.400 ff., col. pl. II); in the Treasury of the Real Monasterio, Guadalupe (see Priscilla E. Muller, ‘Jewels in Spain, 1500 – 1800’, The Hispanic Society of America, New York, 1972, p. 94, col. pls IV and V); in the Treasury of the Cathedral, Barcelona; in the ‘Llibres de Passanties’ of Barcelona; and in Madrid (see Muller 1972, p. 96, col. pl. IX, figs 155, 114 and 147). However, all these Spanish examples seem to conform to a different tradition and exhibit none of the characteristics of the Waddesdon hawk jewel nor of the apparently 'Hungarian' group discussed in cat. no. 10 (pp. 97 - 102).