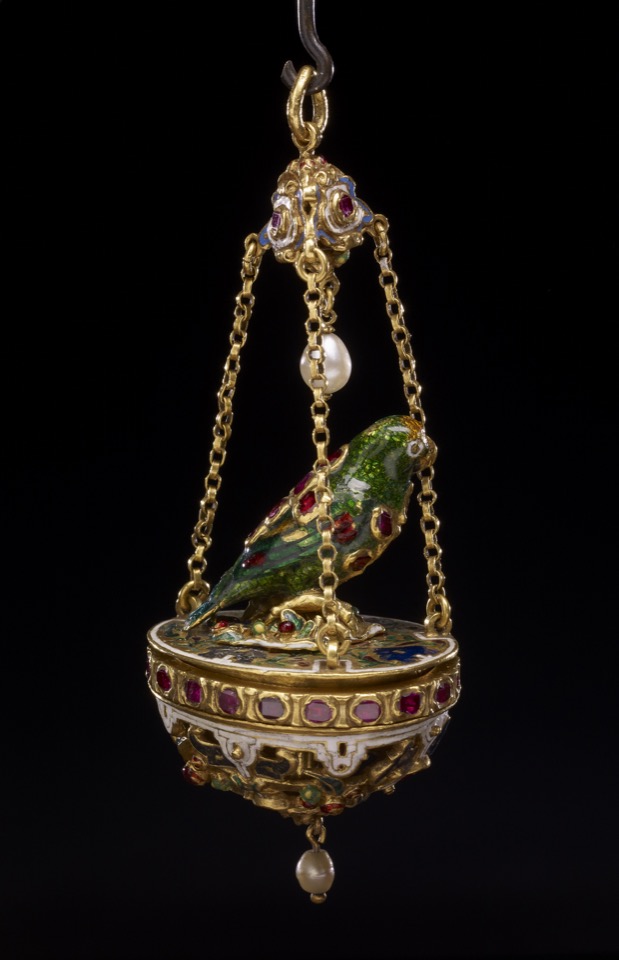 [See below for previous Tait catalogue entry on this object from 1986. This object is now known to be a 19th-century fake by the French jeweller / restorer Alfred André (1839-1919), although the parrot itself may be Spanish and date from the 16th century.]

Provenance: In the Collection of Baron Anselm von Rothschild, Vienna, though the brief description in Schestag 1866, no. 340, leaves this identification in some doubt. [Since the Tait catalogue it has now been established that the description in the Schestag catalogue refers to a similar jewel which remains at Waddesdon Manor.]

Commentary: In Read 1902 this jewel was published for the first time and was said to be “South German, 16th century” - an opinion reiterated in Dalton 1927. There has been one subsequent publication. The mechanics of construction on this jewel have never before been described and, in the absence of comparable examples, it is advisable to examine critically each section of the jewel before attempting a final assessment of it as an entity.

This type of pendant jewel, however, is well-known from the Barcelona Llibres de Passanties, where several designs for pendants (dated 1593, 1599, 1603 and 1609 respectively) incorporate the basic ingredients: an animal, modelled in the round, on a cushion-like base suspended by chains from a 'cartouche' (see Priscilla E. Muller, ‘Jewels in Spain, 1500 – 1800’, The Hispanic Society of America, New York, 1972, figs 148-51). There are, nevertheless, points of considerable difference: the cushion-like base was never depicted in so developed a hemispheroidal form as on the Waddesdon jewel. Usually, the cushion-like base had a shallow curving underside, though the 1603 design by Grabiell Gomar (folio 359) abandons the naturalism of the cushion knotted at the four corners, to which the four suspension chains are shown clearly attached in the other three designs. Although the 1603 design shows only three suspension chains, it is clear that the fourth chain is merely obscured by the one nearest to the spectator. Of the four designs only the earliest one shows a pendant pearl hanging from the centre of the underside of the cushion-like base, so it must be assumed that in the other three designs it was not intended to assemble the parts and hold them rigidly together with a screw inserted from the bottom of the jewel; indeed, in the 1593 design the pendant pearl feature might be purely decorative, for there is absolutely no indication that it serves the same crucial constructional purpose as it does on the Waddesdon parrot jewel.

In the Museo Arqueológico Nacional, Madrid, is a parrot pendant jewel of this type (Muller 1972, p. 94, fig. 147) which incorporates the enamelled and gem-set figure of the parrot, modelled in the round, upon a flat cushion-like base with four pendant pearls at the four corners and four suspension chains meeting at the apex where a gem-set 'cartouche' with a large pendant pearl completes the jewel. The parrot itself is not dissimilar, though its breast is set with one large oval gemstone, rather in the manner of the green-enamelled parrot from the Treasury of Our Lady of the Pillar and now in the Victoria and Albert Museum (see ‘Princely Magnificence’ 1980, no. 106; also Charles Oman, The Jewels of Our Lady of the Pillar at Saragossa, ‘Apollo’, June, 1967, p. 404, col. pl. II; Joan Evans, ‘A History of Jewellery, 110-1870’, London, 1953 (rev. edn 1970), pl. 84c.) This parrot jewel, purchased at the 1870 Cathedral auction sale in Saragossa, is set with a table-cut foiled crystal and is suspended by two hooks above the wings, because it is not made to rest on a cushion-like base; indeed, the parrot is depicted gripping a short branch from which seed pearls are hung. The Saragossa parrot jewel is dated c.1600, and significantly the goldsmith has used white enamel around the eyes in a similar way, though the bright spots of red and yellow which he has introduced haphazardly into the dark green enamel covering the plumage are not to be found on the Waddesdon parrot. The beak, legs and claws are in both examples not enamelled.

This last feature is to be found on a comparable Spanish pendant jewel in the Cathedral Treasury of Santo Domingo, now called Ciudad Trujillo (see E.W. Palm, Renaissance Secular Jewellery in the Cathedral at Ciudad Truillo. ‘The Burlington Magazine’, XCIII, 1951, pp. 317-18, figs 12and 14). The jewel depicts a gold lizard or salamander, and its body (except for the white-enamelled belly) is covered in a similar dark green translucent enamel, through which the darker scaly pattern is visible. Along its spine, from the head to the beginning of the tail, it is set with a row of five emeralds, creating the same distinctive effect that was achieved with the table-cut rubies that ornamented the back and head of the winged salamander pendant rescued in 1968 from the wreck of the Girona, off the rocky coast of Antrim, Northern Ireland, and now preserved in the Ulster Museum, Belfast (see L.N.W. Flanagan, ‘The Wreck of the Girona’, Ulster Museum, Belfast, 1973, p. 24, col. illus.) The Girona was the sister ship of the flagship of the Spanish Armada and sank on 16 October 1588, while attempting to return to Spain after the defeat of the Armada. The jewels from this wreck are a most valuable document. The gold winged salamander jewel was originally covered in enamel but, fortunately, three of the nine table-cut rubies have survived in the lower spine; between the wings two additional rubies were originally set on either side of the row of seven rubies. The effect of this arrangement and method of setting is remarkably close to the breast and back of the Waddesdon parrot. By contrast, a rather different effect is achieved on the beautifully preserved lizard pendant in the Instituto de Valencia de Don Juan, Madrid (see Muller 1972, figs 33a, b, c), the history of which is not recorded; on this jewel emeralds and rubies along the spine from head to tail seem too large and less integrated into the form of the animal itself.

The Waddesdon parrot, as an item on its own, has many distinctive Spanish characteristics and is closely related to that genre of animal and bird pendants which was so popular in the late sixteenth and early seventeenth centuries, as the documentary evidence also confirms. The famous pictorial Inventario of Our Lady of Guadalupe (Archivo del Real Monasterio, Guadalupe, folio 32, c.1777) shows a parrot pendant jewel of dark green enamel, with gold beak and a large single gemstone (probably an emerald) in its breast (see Muller 1972, col. pl. IV). The Guadalupe parrot jewel is similar to the Saragossa jewel (now in the Victoria and Albert Museum) because it is shown with its two claws gripping a short branch and, on the upper edges of the wings, two suspension hooks for the chains meeting at the 'cartouche' with its small pendant pearl in the centre.

The same Inventario of Guadalupe has another water-colour drawing of a bird pendant on folio 7 (see Muller 1972, col. pl. V). It depicts an eagle, similarly perched on a stout branch but with wings opened; to the tips of the wings are attached the two suspension hooks and chains leading to the 'cartouche' above. This drawing of the eagle pendant is especially interesting because it shows the breast set with eight flat table-cut gemstones grouped around a slightly larger square gemstone in the centre. The method of arranging and setting the gemstones which abut each other, as in a flat mosaic pattern, is most reminiscent of the backs of the frog and toad pendants. One example in the Musée du Louvre (Lenoir Bequest, 1875) was published by Marquet de Vasselot (1914, no. 368), and another, with more than twelve flat gemstones, was formerly in the Melvin Gutman Collection in New York (see Muller 1972, p. 34, fig. 35, where it is pointed out that a ruby-set frog pendant was listed in a Spanish inventory of 1623, according to Estebán García Chico, ‘Documentos para el estudio de arte en Castilla’, Valladolid, 1963).

There are a number of pendant jewels of this general form, having the figure placed on the upper surface of a hemispheroidal base, but as far as a limited survey can establish, none are constructed in the same way as the Waddesdon jewel. No doubt it was because the Waddesdon jewel had not been taken apart when Parker Lesley was making his comparative study that he was led to publish his misleading statement in 1968 (see Parker Lesley, ‘Renaissance Jewels and Jewelled Objects from the Melvin Gutman Collection’, Baltimore Museum of Art, Baltimore, 1968, p. 109, no. 38). In his discussion of the Gutman 'armed centaur' pendant, which also has a hemispheroidal ajouré base, Parker Lesley states that the base of the Waddesdon pendant “is so similar as to suggest that both pieces originated in the same workshop. The enamelled flowers of the upper plate, the pierced strapwork scrolls and the fastening of the pendant pearl are nearly identical”.

In fact, the Gutman 'armed centaur' pendant, which was sold in New York (Parke-Bernet Galleries in Part II,

(a) There is no matching gold lion-mask screw with pendant pearl. Indeed, there is no screw arrangement at all for holding the assembled parts together, as on the Waddesdon parrot jewel.

(b) The openwork hemispheroidal base on the Gutman jewel “is hinged” (according to Parker Lesley) to the flat oval upper base and its moulding of black enamel to which the four suspension chains are attached; the hinged ajouré section of strapwork opens downwards.

(c) The design of the pierced strapwork is unrelated to that on the hemispheroidal base of the Waddesdon jewel.

(d) The flat upper surface is in no way comparably decorated, because the centaur figure “has been fused to a base of opaque green enamel. . . this base is attached separately ... to the translucent green enamelled surface of the oval frame beneath; also attached to this surface, and surrounding the base, are six small flower clusters of translucent red, green and lavender enamel” (Parker Lesley, p. 108).

There is no comparison, therefore, between this construction or between this decoration and that on the Waddesdon parrot jewel.

The basse-taille enamelled decoration of the gold oval upper surface of the Waddesdon pendant is unparalleled in jewels of this kind and should not be confused with applied clusters of enamelled flowers in relief, such as are found on the Gutman jewel. The style of the basse-taille enamelled decoration is close to the gold locket, or miniature case, presented by Dame Joan Evans in 1975 to the Victoria and Albert Museum (M. 67-1975, see Shirley Bury, ‘Jewellery Gallery Summary Catalogue’, Victoria and Albert Museum, London, 1982, p. 70, Case 13, Board D, no. 7, illus. on p. 76). This case is dated to the “last quarter of the sixteenth century” but is merely described as “Northern European”. Its basse-taille enamelled flower sprays around a central red rose are extraordinarily similar to those on the Waddesdon jewel.

The design of the openwork strapwork of the Waddesdon pendant is equally accomplished, being both correct in all its Mannerist detail and bold in its three-dimensional effects. However, when viewed as a whole, the pendant jewel gives the impression of a 'marriage', cleverly contrived but not entirely convincing.