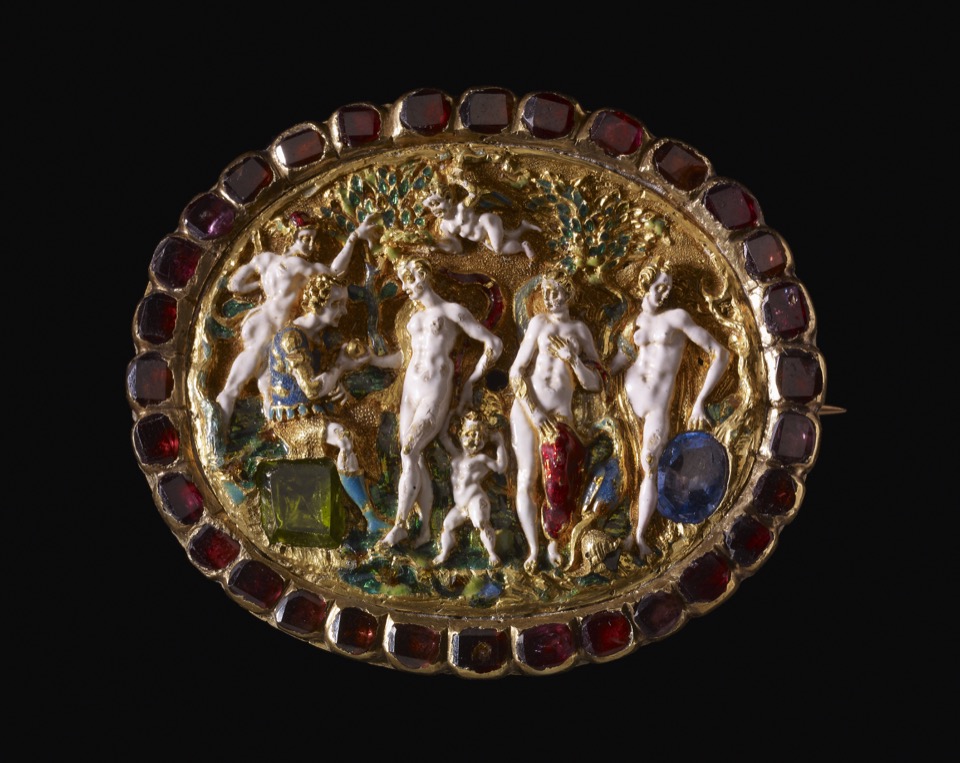 The Judgement of Paris

Possibly an early 19th-century fake, made up as a brooch.

Hat jewel; gold; Judgement of Paris in relief; enamelled; set with chrysoprase and sapphire; whole within border of garnets; Paris dressed in cuirass and buskins, seated on chrysoprase and presenting apple to Venus, who is being crowned by a flying Cupid, while behind stands Cupid himself; next stands Juno and Minerva at back, her shield formed of oval sapphire; Mercury stands beside Paris; modern back, mounted as a brooch.

Commentary: The subject of this hat-jewel, the Judgement of Paris, is exceptional among the surviving examples of Renaissance historiated jewellery. It is, however, to be found on a jewel in one of Hans Holbein's late portraits (c.1542-3); the sitter, thought to represent the young Princess Elizabeth, daughter of Henry VIII, is depicted wearing a gold enamelled medallion jewel of the Judgement of Paris, although the three goddesses are grouped quite differently, the central figure facing inwards with only her back being visible - rather in the manner of the Three Graces since Graeco-Roman times. Interestingly, Holbein has painted this jewel so that its four projecting hooks are clearly identifiable, and yet it is no longer worn as a hat-jewel but as a brooch, just below the opening of the high v neck of the dress (see Paul Ganz, A newly discovered Lady's Portrait by Hans Holbein the Younger, ‘The Connoisseur’, CXXX, 82, col. pl.; Tait 1962, p. 231, pl. XL,B). It may be a gentleman's hat-jewel being worn as a token of affection, or it may be an indication that these medallion jewels with four projecting hooks were used equally by ladies to sew on to their dresses.

The subject was very popular in Renaissance Italy, and it is not in the least surprising to find an example listed among the jewels of the Medici court in Florence in 1566 (Biblioteca Nazionale Centrale, Florence, MS. no. 352, pub. by C. Mazzi in ‘Rivista delle Bibloteche e degli Archivi’, 1907-10 (item 13): “Una medaglia d'oro, tonda, entrovi figurato il judito di paride smaltato, incassatovi ne l'edificio sei diamanti. . .” (“A gold medallion, circular, on which is represented the enamelled Judgement of Paris, set into the building six diamonds . . .”)

In Italy the subject had become increasingly popular with the patrons and the artists of the Renaissance when engravings, like Marcantonio Raimondi's ‘Judgement of Paris’ after Raphael, were widely circulated not only in Italy but, to a lesser extent, north of the Alps. The distinctive figure of Mercury on the hat-jewel in the Waddesdon Bequest is directly based on the corresponding figure in Marcantonio Raimondi's engraving.

The origin of this jewel has still to be established with certainty. During the last 113 years it has been much published and illustrated and, despite widespread and long established interest, opinions about its origin have remained sharply divided. Although all have admired it as an exceptional work of the Renaissance, some have seen it as illustrative of Italian mid-sixteenth-century craftsmanship (from Eugene Plon in 1883 to Joan Evans in 1970); others have claimed a German origin for it (from Read in 1902 to Yvonne Hackenbroch in 1979). Read gave none of his reasons for disagreeing with Plon's attribution, but in Dalton's revised edition (1927) it is pointed out that “this jewel bears a close resemblance to a drawing by Hans Mielich in the Royal Library at Munich”. In fact, it should be compared not with one but with two of the coloured drawings of Hans Mielich, painted between 1552 and 1556 as part of a large pictorial Inventory of the Jewels belonging to Anna, the wife of Albrecht V, Duke of Bavaria (Cod. Monacencis, icon. 429, Staatsbibliothek, Munich). The presence of these hat-jewels in the Duchess Anna's Inventory does not help to identify their country of origin, for her collection would undoubtedly have contained many gifts from the leading princes of Europe (see Tait 1962, pp. 243-4, pl. XLVIII a-c, where an Italian origin for all three hat-jewels was proposed).

The fact that both these hat-jewels are now lost and are known to us only through Hans Mielich's drawings is a serious handicap, but there is much about the figure style and the compositions that suggests an Italian origin. Indeed, the crowded scene of the second hat-jewel is known to be based on the Raphael fresco in the Stanza della Segnatura, in the Vatican, depicting ‘The hiding of the books of Homer by Alexander’, which had become well known through the engraving by Marcantonio Raimondi (active in Rome first quarter of the sixteenth century). His many engravings after the works of Raphael were frequently used by his contemporaries in Italy, but even north of the Alps, especially in France and the Netherlands, they also had a considerable influence. At the French court Etienne Delaune (c. 1518 - c. 1583) had emerged as a major designer, adapting most skilfully the source material, often Italian, to suit the needs of each particular commission. His well-known set of twenty-six oval designs for historiated jewels, each incorporating gem-stones within the figure scenes, is preserved in the Albertina in Vienna, and many of them bear a striking similarity to the Judgement of Paris hat-jewel and to the two lost hat-jewels recorded by Hans Mielich (see Hackenbroch 1979, pp. 76-8, figs 175, 178-80, where it is even suggested that the two Mielich hat-jewels were possibly “gifts for Anna and Albrecht's wedding in 1549, ordered by Henry II from a court jeweller who used designs by Etienne Delaune”). If the two Mielich hat-jewels are accepted as being more closely related to the designs of Etienne Delaune than to a Munich court artist, it may be argued that it is only because so few Italian jewellery designs of the Renaissance have survived that they are not attributed to an Italian workshop.

In Clifford Smith 1908, Dalton 1927 and Evans 1970 attention was drawn to the similarities that exist between this hat-jewel and the beautifully enamelled oval hat-jewel of a battle scene bequeathed to the Cabinet des Médailles in Paris by J. H. Beck in 1846 (see Evans 1970, p. 85, pl. 46; ‘L'École de Fontainebleau’ 1972, no. 659). The virtuosity of this complex gold enamelled relief is unquestionably attributable to an Italian or a French mid-century court jeweller; indeed, there has never been any suggestion in print that it could have a German origin. Battle scenes of this type are, of course, well-documented in both Italian and French Renaissance art, not least among the engraved gems, painted enamels and bronze plaquettes. The Cabinet des Médailles hat-jewel has been tentatively linked with the brief description of item 8 in the 1561 Inventory of the Cabinet du Roi but even if such an identification were secure it would not establish the hat-jewel's origin. Although there are many major differences between the Battle Scene and the Judgement of Paris hat-jewels, it is interesting to compare the figure of Mercury with that of the nude warrior in the foreground and note the similarity of the contrapposio and the treatment of the modelling.

The reverse of the Battle Scene hat-jewel has never been uncovered and, of course, Hans Mielich did not record the backs of the two hat-jewels belonging to the Duchess Anna of Bavaria. However, the reverse of the Judgement of Paris hat-jewel was revealed in 1962, when the modern back was first removed, and it was found to be flat and the figure work not repoussé but cast (see Tait 1962, p. 243). It is well-known from the published contemporary technical accounts of the craft of the goldsmith that in the sixteenth century jewellers used both the technique of embossing (or repoussé) and that of casting. The earliest of these technical treatises is the remarkably reliable compilation by Vannoccio Biringuccio, ‘De la Pirotechnia’ (Venice, 1540), but as the writer was a mathematician principally concerned with metallurgy and bronze-casting in relation to the science of warfare, his account is probably far less well-informed on the jeweller's craft than Benvenuto Cellini's ‘Due trattati intorno die principali arti dell'oreficeria’ (Florence, 1568). Cellini, perhaps the most talented goldsmith/ enameller/ jeweller of the Renaissance, had first-hand experience of all the technical problems from the handling of gemstones to the firing of enamels, and throughout his text there is ample evidence of his practical everyday knowledge of how to obtain the best results, even when it ran counter to established custom or the known practice of acknowledged masters of the craft, like Caradosso.

It is difficult to see why a hat-jewel of enamelled gold should be cast, since the manufacture of only one specimen by the casting method would be disproportionately costly in the use of extra gold, time and effort. The process would have necessitated the making of a model, perhaps in a base metal after a wax original, and then the taking of a mould of the model in two halves, using a sandy gravel combined with ashes to create a kind of dough. The two basic methods, with certain variations, as described by Cellini (Chapter XIII), are applicable whether casting in gold, silver, brass or any other metal, and Cellini stresses that he employed both methods not only for the casting of seal matrices “but for casting all sorts of other things too”. One possible explanation could be that the goldsmith required not only a grand example in enamelled gold but also a number of base metal (lead or bronze) copies, for his patron might require them to be distributed on some public occasion. The same model and mould would then suffice to produce the gold versions and the silver or base metal copies. In most circumstances, however, the gold could be worked far more thinly by the embossing method and, when only one jewel was required, the goldsmith would not need to spend precious time on the mould-making stage of the casting process.

Most recently this hat-jewel has been published as a product of “Augsburg or Prague, c.1580” (Hackenbroch 1979, p. 193, fig. 535); it is suggested there that it is the work of one of the “Augsburg and other South German jewellers whom the Emperor had invited to his court in Prague”; the same origin is claimed for another extant historiated jewel, Moses Striking the Rock (Kunsthistorisches Museum, Vienna, inv. no. 1616; see ‘Katalog der Sammlung für Plastik und Kunstgewerbe II’, Vienna, 1982, p. 104). The latter jewel is, indeed, a very interestingly related survival because, although the figure style is quite different and obviously South German (see cat. no. 12 of this catalogue, p. 109), the jewel incorporates several gem-stones into the composition of the figure scene. Furthermore, it may have been cast (i.e. made in exactly the same way) because a second specimen is said to exist (Hackenbroch 1979, p. 194; however, it is not illustrated nor is any reference given to its publication elsewhere). If the second version is truly identical, then, as Yvonne Hackenbroch points out, “the occurrence of another pendant scene . . . indicates the use of a lead model, a typical practice of South German masters, but not applicable when working exclusively for the court; however, it is possible that this pendant was furnished by an Augsburg master who had come to Prague only recently”. Unfortunately, the reverse of the Vienna Moses pendant jewel is concealed, and it is not known if it has a comparable flat back; but it is possible that the Vienna example is the product of a German workshop adopting a similar method of manufacture to that of the maker of the Judgement of Paris hat-jewel in the Waddesdon Bequest.