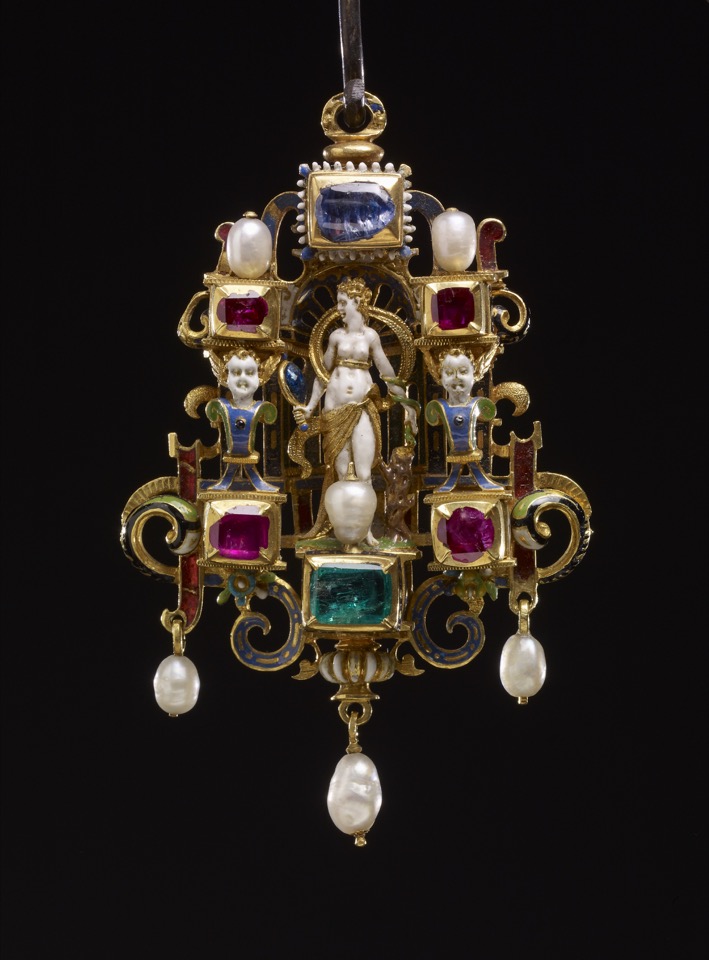 Pendant jewel; gold; centre: Cleopatra standing on emerald with mirror in one hand and snake in other; terminal bust on either side with square ruby above and below; sapphire above centre; scroll border with three pendant pearls; back of architectural design, supported by scroll brackets and enamelled; inscribed.

Commentary: During the last few years the reputed age and origin of the jewel have become increasingly open to doubt. Shortly before going to press, however, a piece of most telling evidence came to light in Germany - another jewel of great similarity. With the help of Mr Ulf Breede of Kiel who brought his unknown and unpublished jewel to London, it was possible to place it alongside the one from the Waddesdon Bequest (please see images attached to this record). It then became irrefutably clear that they were virtually identical in all significant respects, and neither would seem to have been made before the nineteenth century.

Not only is the architectural frame with its very distinctive free-standing term-like, caryatid bust (on either side) almost indistinguishable from the Kiel version, but the backs of both versions are similar. In both cases various curious decorative motifs are repeated, and there is ample evidence that these two jewels are the product of the same craftsman or, at least, the same workshop.

The superior kind of faker rarely produces two (or more) versions of his deceptive creations. In the field of these doubtful 'Renaissance' jewels the faker seems to have frequently used parts cast from the same mould but, by the cunning use of re-arrangements and individual additions, these versions are heavily disguised and are given the appearance of being quite different and wholly individual in design. Fortunately, the goldsmith who created these two 'Renaissance' pendants had become careless and, in all the essentials as well as many of the details, they reveal their common origin in a nineteenth-century workshop (for further discussion see Introduction, pp. 12-18).

In particular, the Kiel version had survived with two little gold tubes or 'lugs' projecting, one on each side - in exactly the same places where the two filed-off 'scars' can be seen on the Waddesdon jewel. Furthermore, although the two scrolls are enriched with enamelled decoration, the filing-off of the 'casting lugs' on the Waddesdon version has been permitted to mar the effect and leave a small bare patch on either side, with the file marks clearly visible. The projecting tubes curve sharply backwards on the Kiel version before terminating in a crudely unfinished and abrupt fashion. There is no attempt to treat these two little projecting prongs as part of the jewel proper; there is no chasing of the surface or ornamentation. They appear to end just where the tubes were snapped off, thereby giving every appearance of being part of a casting process in which a batch of four or six moulds for the backs of these pendant jewels were placed in a square or circular formation, linked together by tubes so that the casting could be done in one single operation, creating certain economies and technical benefits in production.

Although the Waddesdon and Kiel jewels cannot be exactly paralleled among the workshop drawings of the faker Reinold Vasters of Aachen, nevertheless there is a general similarity in appearance, outline and construction between them and one particular drawing (Victoria and Albert Museum, E. 2848-1919). It was included in the exhibition ‘Princely Magnificence’ 1980, p. 140, no. HG. 2, along with the almost identical faked version preserved in the Walters Art Gallery, Baltimore (no. H. 18). Neither the Baltimore pendant nor the Vasters drawing is sufficiently close to the Cleopatra pendant to establish with complete certainty the Vasters origin for the pendant; there is, for example, no comparable use of the winged heads on either side, nor, on the reverse, the c-shaped scrolls on either side in the middle. Nevertheless, the main outline of the design corresponds to the drawing by Vasters, and the characteristics of the pendant itself help to confirm its present attribution to his workshop.

In conclusion, it is perhaps significant that the jewel lacks the quality of the Venus and Cupid pendant (cat. no. 13) [WB.147], which appears to have a slightly earlier origin in the nineteenth century. However, the recognition of the characteristics of the different workshops of the nineteenth century producing these pseudo-Renaissance jewels has only just begun, and the evidence has yet to be amassed and studied. Attention should be drawn to another jewel of this type, which after careful study seems to be of the same origin. It is the undocumented pendant jewel of the Incredulity of St Thomas (Wallace Collection, London), which was published by Joan Evans as “German, late sixteenth century” (see Joan Evans, ‘A History of Jewellery, 110-1870’, London, 1953 (rev. edn 1970), p. 114, pl. 87b, where it is described as the Noli me Tangere subject). Its almost identical basic form is best seen by making a comparison of the backs of the two jewels. The fronts of these two jewels seem rather different and, superficially, the application of another combination of ornamental details has disguised the basic similarities. However, the Wallace Collection jewel has as many characteristics to arouse serious doubts as the Cleopatra pendant, not least the way in which the goldsmith has failed to find a satisfactory solution to the design of the openwork scrolls on either side of the pierced shell-niche (see the back of the jewel). It would appear that a horizontal projection now extends from the brickwork on either side and tapers to a point but then droops downwards in a crude, heavy bud-like form, as it passes in front of the upward-curving scroll. It is a feeble and most unconvincing piece of work, which should be compared with the correct handling of this motif in relation to a very similar 'architectural' back on the documented Faith pendant in the Grünes Gewölbe, Dresden (U. Arnold, ‘Schmuckanhänger’, Schriftenreihe der Staatichen Kunstsammlungen, Dresden, 1964, p. 54, no. 18, pl. 22; also Yvonne Hackenbroch, ‘Renaissance Jewellery’, Sotheby Parke Bernet Publications, London, New York and Munich, 1979, p. 206, fig. 568 A-B); Hugh Tait, 'Catalogue of the Waddesdon Bequest in the British Museum. 1., The Jewels', British Museum, London, no. 14, pls. X, XI, VIIA,B,C.