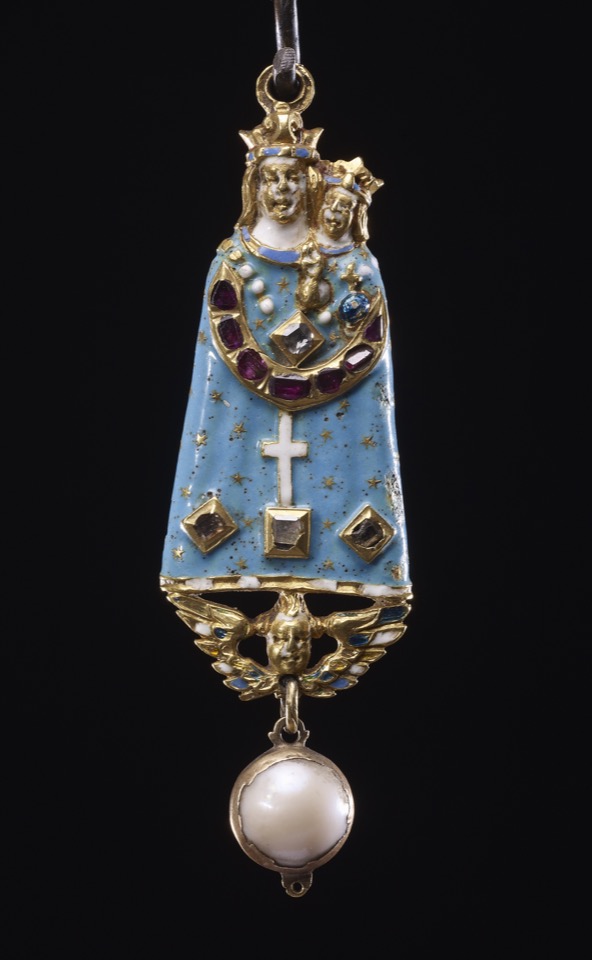 [See below for previous Tait catalogue entry on this object from 1986. This object is now thought to be Spanish, dating from 1525-1575.]

Commentary: In Spain the Marian cult, always fairly strong during the late medieval period, reached new heights of popularity by the second decade of the seventeenth century and continued to flourish throughout the century. The traditional devotion to La Madre de Dios ('The Mother of God') was encouraged by the proclamation of the Conception of the Virgin as Immaculate and by the existence of many local shrines, where a deeply revered image of the Virgin and Child would become the focus of attention and of gifts of jewellery. La Virgen del Sagrario in Toledo is a well-documented example, where a gold pendant composed entirely of 170 square-cut diamonds (except for the heads of the Virgin and Child) was donated to be sewn on to the skirt of the robes of the image of the Virgin of the Sagrario (see Priscilla E. Muller, ‘Jewels in Spain, 1500 – 1800’, The Hispanic Society of America, New York, 1972, p. 120, fig. 195, where it is stated that this and other jewels from the shrine in the Cathedral of Toledo were lost during Spain's Civil War and are known only from the photographs in the Barcelona Archives and from the full description in an article, El manto de la Virgen del Sagrario, ‘Toledo’, IX, 1923, pp. 703-6.) In general form this diamond-set jewel is little different from the tiny Waddesdon enamelled version and, no doubt, there were other centres of Marian devotion that gave rise to similarly designed jewels.

However, there appear to be no grounds for accepting the recent publication of this Waddesdon devotional pendant as Our Lady of the Pillar (see Hackenbroch 1979, p. 339-40, fig. 910, where the jewel is attributed to Saragossa goldsmiths in the first half of the seventeenth century.) The shrine of La Nuestra Señora del Pilar is in Saragossa (which lies approximately half-way between Madrid and Barcelona), where a new basilica was built next to the Cathedral to house the shrine. The story of its slow erection, begun in 1681 but still continuing in 1870, of its fund-raising problems and of its organisation of the sale of most of its jewels donated by wealthy pilgrims over the centuries is recounted by Charles Oman (The Jewels of Our Lady of the Pillar at Saragossa, ‘Apollo’, June 1967, pp. 400-6), together with illustrations of the pieces purchased by the South Kensington Museum (now the Victoria and Albert Museum) at the sale held in the Sala Capitular of the church from 30 May 1870. Fifteen of the Saragossa jewels were included in the Victoria and Albert exhibition ‘Princely Magnificence, Court Jewels of the Renaissance, 1500-1630’, ed. A. Somers Cocks, exh. cat., Victoria and Albert Museum (Debrett’s Peerage Ltd), London, 1980, nos 95-109). Mr Oman had already recognised that not all the pieces were made in Spain, let alone in Saragossa itself; indeed, the most spectacular item - the gold enamelled 'Cravat' - he described as “French, c. 1670”, knowing that it had been donated to the shrine in 1679 by the Marquis de Navarens. In 1980 Anna Somers Cocks pointed out that the rock-crystal and gold enamelled pendant containing miniatures of St Francis(?) and of the Virgin of Loreto, a cult image in Italy, might be an Italian jewel of c. 1600 (no. 96).

However, there are three devotional jewels of special significance among the Victoria and Albert's Saragossa purchases (nos 95, 104 and 107; also illustrated in colour in Oman 1967, pl. III, a-b). Although not so described, each of these jewels depicts the gold enamelled figure group of the Virgin and Child standing above a short column - or pillar. According to the legend attached to Saragossa, the Virgin (while still alive) was miraculously transported there in AD 40 to help St James the Greater and, before her return to Palestine, she left instructions that the marble pillar on which she was standing should be enclosed within a church dedicated to her name. These three jewels can, with justification, be identified as representing Our Lady of the Pillar and be attributed to a goldsmith's workshop in Saragossa itself. One of the three (no. 95) comprises the standing figure without any gem-set framing scrollwork; in that respect it compares with the Waddesdon devotional pendant but does not represent the Virgin and Child enveloped in the heavy mantle, nor is the figure decorated with any gemstones or any opaque light blue enamel.

Although the other two jewels of Our Lady of the Pillar (nos 104 and 107) do depict the Virgin and Child in the heavy mantle, these examples are enamelled in the more typical translucent dark blue; curiously this colour has been used only once on the Waddesdon pendant - for the orb held by the Christ Child.

Without the inclusion of the symbol of the column - the pillar - the Waddesdon pendant cannot be associated with Saragossa and, in view of the existence of shrines to the Virgin Mary in many other parts of Spain, including, for example, La Virgen de los Reyes in Seville Cathedral, there seems little chance of determining where in Spain this pendant jewel was made in the seventeenth century. However, its association with Spanish traditional practices and styles now appears so convincing that it seems justifiable to abandon the previous attributions in Read 1902, where it was described as “Spanish or German, late 16th century”, and in Dalton 1927, where it was described as “Spanish or German, early 17th century”. However, the gold-backed pendant pearl of hemispherical form (below the winged cherub's head on this jewel) may be a later addition. It lacks the character of a seventeenth-century pendant and, indeed, it terminates in a tiny loop which if used to suspend yet another pendant would create a most uncharacteristic effect. A close examination of the upper loop (above the pearl) indicates that it is fashioned in the distinctive form that was de rigueur throughout the eighteenth century.