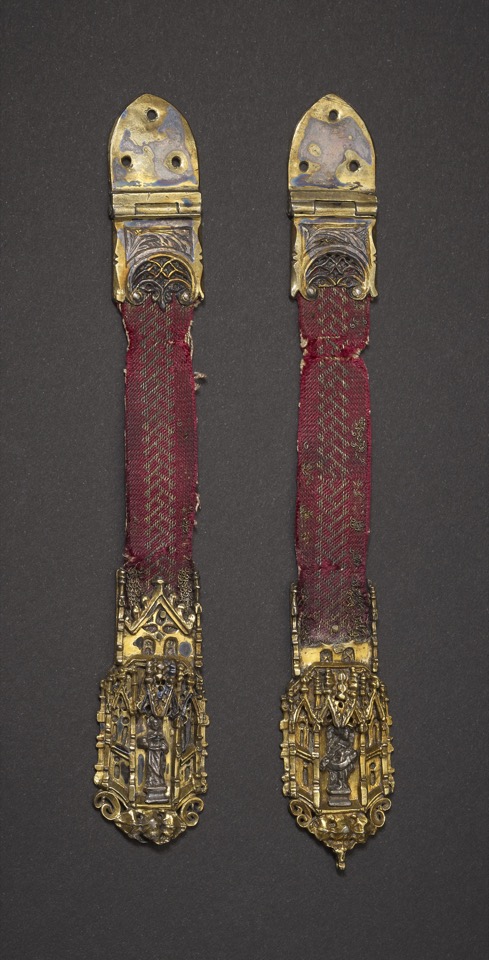 Pair of book-clasps, silver-gilt mounts, originally to bind illuminated manuscript. Red silk straps decorated with geometric interlace pattern in gold thread. At one end of each clasp a partially cross-hatched and engraved hinged mount tapers to a point and is pierced by three holes in a triangular formation. Clasp a) decorated with a figure, consistent with contemporary representations of the Angel of the Annunciation, standing within an architectural Gothic canopy. The figure holds a scroll and appears to have wings. Clasp b) decorated with a figure of the Virgin Mary (?) standing within an architectural Gothic canopy. The figure appears to be holding a book.

This object was previously owned by Hollingworth Magniac, and collected and bequeathed to the British Museum by Ferdinand Anselm Rothschild.

on 11 July 1892, lot 803, and subsequently acquired by Baron Ferdinand Rothschild.

Commentary: In a note written and published by John Charles Robinson in 1861 - and republished in 1892 in the Christie's Sale Catalogue - the history of this pair is recorded as follows: “These clasps were, until a short time before their present possessor obtained them, attached to a splendid manuscript, which was unfortunately broken up, for the sake of the illuminations, by the dealer into whose hands it had fallen.”

Unfortunately, no note of the contents of that illuminated manuscript or its history and origin has been preserved, but evidently Sir Charles Robinson had reason to attribute this pair of clasps to a French workshop, for they were emphatically described in 1861 as “French Gothic work, first half of 15th century”.

Curiously, few such late Gothic book-clasps have been published, though a highly realistic painting by Albrecht Dürer (1471-1528) of St Anthony holding a massive open book shows exactly how this type of book-clasp functioned. Dürer's painting is part of the famous Dresden Altarpiece, finished about 1496, which was moved in 1687 from the Schlosskircke at Wittenberg to the Electoral Kunstkammer in Dresden and since 1835 has been hung in the Dresden Picture Gallery (H. Kohlhaussen, ‘Nürnberger Goldschmiedekunst des Mittelalters und der Dürerzeit 1240-1540’, Berlin, 1968, p. 105, fig. 182).

The pointed plate with the three holes would be pinned to the back cover (metal or wooden boards) and the hinge would be aligned with the edge of the cover. The strap would be made the correct length so that at the other end the back of the architectural clasp would fasten on to the stud on the edge of the front cover. For an earlier example of this type of book-clasp, see the 1339 'Plenar' of Otto der Milde of Brunswick (reigned 1318-44), which is still preserved in the Welfenschatz at Brunswick (described and illustrated in Johann Michael Fritz, ‘Gestochene Bilder’, Cologne, 1966, p. 456, no. 88, pl. 319).

Many of the late Gothic ornamental motifs used on the book-clasps can be found on French ecclesiastical silver-plate, such as the chalice and paten of 1516 in the Church of St James, Perpignan, and the nautilus shell nef given to the Cathedral of Chartres in 1540 (‘Les Trésors des Eglises de France’, exhibition catalogue, Paris, 1965, no. 579, pl. 200, and no. 121, pl. 221, respectively).