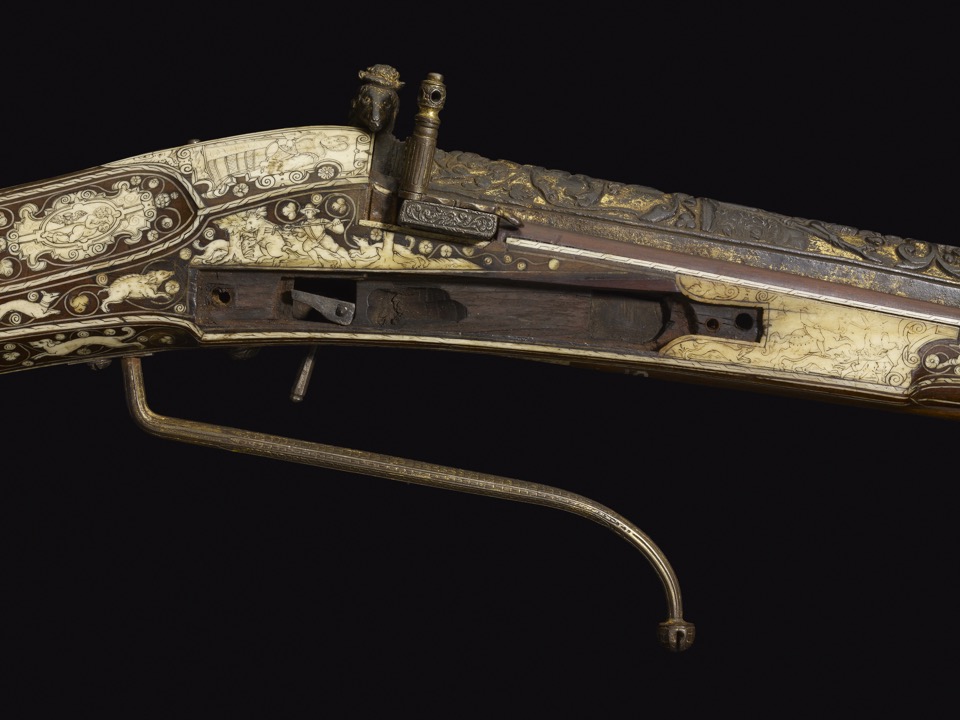 The stock and barrel were fitted together later, probably for Frédéric Spitzer.

Matchlock gun; barrel gilded and fluted; muzzle in form of Corinthian capital with four Pan-like figures; breech chased in relief with formal scroll work, masks and figure of St Christopher; oblong lock plate with scrolls; match-holder in form of monstrous animal; backsight in the form of a double sheep's head with hat; stock curved and inlaid with bone plaques, running animals, figures of Virtues, Diana and Actaeon, the scenes with principle figures inscribed with their names, a convivial scene, etc.; foresight wanting. One of the inlaid plaques on the barrel with figure of Hope (the first one in from the muzzle), inscribed SPES with the letters GS.

Purchased by Baron Ferdinand de Rothschild at the sale of the collection of Frédéric Spitzer in Paris in 1893.

Commentary: The Spitzer catalogue image shows a different ramrod which is longer and has a larger tip. This gun has undergone a number of other alternations. The engraved bone panel at the back of the butt is in a different style and lacks the quality of the rest of the inlay. The trigger guard has been set the wrong way round, and it cannot be mounted the right wy round because the ramrod is set too far back. The lack of retaining pieces for the ramrod is also unusual. The muzzle extends beyond the length of the barrel, as in WB.9, but it is nevertheless all one piece of metal with the barrel. The barrel does not fit well where it joins the stock, neccessitating infill behind the pan. There is further infill on the lock plate, and the ramrod channel has been altered. All of this suggests that the gun may have been given a new barrel and a new lock (information kindly supplied by David Edge and Jamie Hood, July 2012).