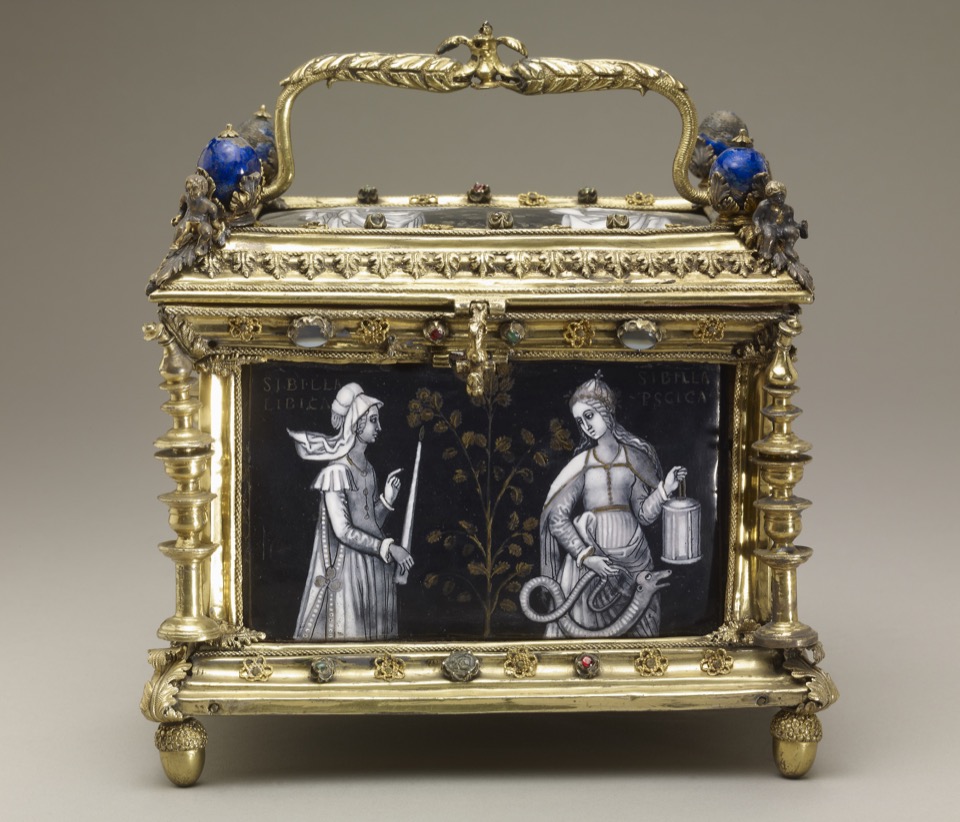 The six Sibyls shown on the casket prophesied the coming of Christ. They are delicately painted in white enamel on a dark ground (grisaille), signed ‘I. P.’. The skilful Limoges enameller is unknown but the silver-gilt mounts on the casket are attributed to Pierre Mangot, goldsmith to Francis I of France. Mangot specialised in exotic and unusual pieces for the French court.

This object was previously owned by Ralph Bernal, and collected and bequeathed to the British Museum by Ferdinand Anselm Rothschild.

Provenance: Lot 1565 in the sale of the collection of Ralph Bernal in London in 1855, where it was purchased by Martin T. Smith M.P. for £245. As Smith exhibited it in 1874 it must have entered the collection of Baron Ferdinand Rothschild sometime after this.

Commentary: From Tait 1981 - 'For a short period during the middle of the sixteenth century, the grisaille technique (white painting on a dark ground) seems to have been preferred to the polychrome and, in the hands of the great masters of this craft, the most sophisticated and subtle effects were achieved. This casket, with its enamelled plaques probably dates, therefore, from the mid-1530s and, as such, is among the earliest-known examples of the use of the grisaille technique in the field of Renaissance painted enamels. The beautiful half-length figures painted in white with subtle flesh tints on a black ground represent eight of the twelve Sibyls, those women in the classical world who were reputed to possess the gift of prophecy. Beside each figure the name has been added in gold, though, in fact, each holds the appropriate attribute - for example, the Libyan Sibyl carries the lighted torch.'

In 1862 the enamels were attributed to the Master KIP by AA Franks, but the enamel on the lid of this casket is signed 'IP' and due to variations in style may be by another enameller. A set of plaques telling the story of Sampson and the Lion in the Berlin Kunstkammer are signed in the same way (see Kunstgewerbemuseum Berlin, inv. no. K 4987). The Sibyls are loosely based on woodcuts in Livre d'Heures, first published in Paris 1504, printed by Philippe Pigouchet (see British Library shelfmark C.29.g.4. for a later edition).

Although the mounts are unmarked they can be compared with those on a mother-of-pearl casket in the Louvre, acquired in 2003, which is marked M for Mangot (as identified by Michele Bimbenet Privat) and has a Paris hallmark for 1532-3 (see Louvre inv. no. OA 11936). Another casket is marked by him with hallmark for 1540-1, in the Louvre, which is documented to Mazarin's collection. A third casket in the cathedral treasury of Mantua, also with shell decoration is marked by him and hallmarked Paris, 1533-4. All three comparable caskets have similar mounts and handles and can all be given, like this Sibyls casket,a French royal provenance owing to the fact that Mangot was goldsmith to Francis I. There is a cup marked for Mangot in the Cabinet des Médailles, Bibliothèque nationale de France, Paris, which is undated (inv. no. 487).