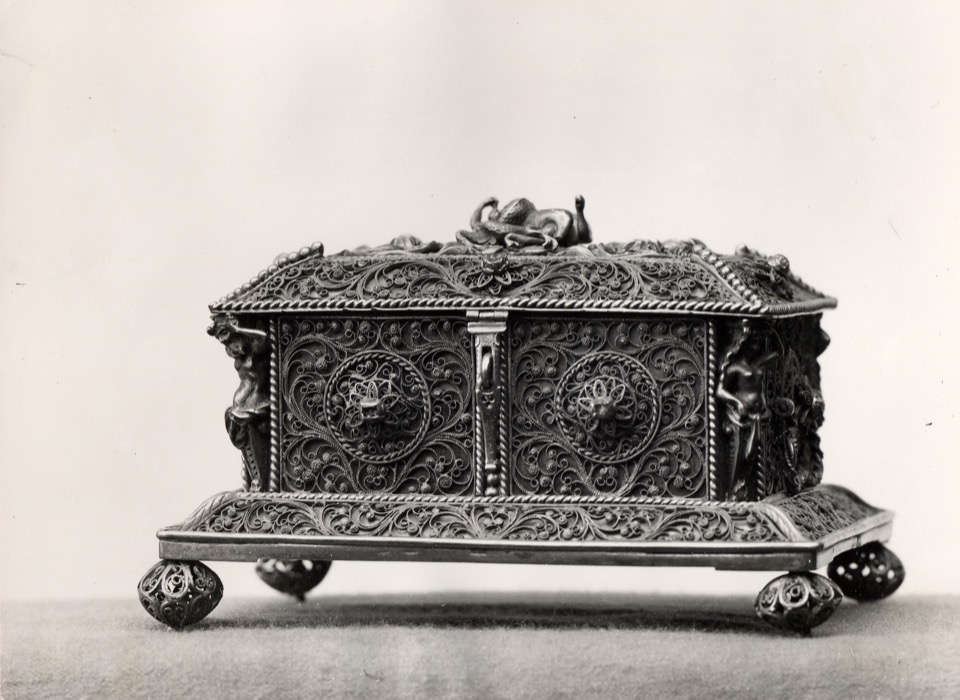 Casket; silver-gilt plate; covered with scrollwork in silver filigree; oblong with projecting plinth; lid with Neptune and Amphitrite, bodies of baroque pearls on ground of scrolls set with diamonds; sides with rosettes. each set with emerald; caryatid figure at each corner; two twisted handles.

'Origin: Uncertain; no marks; previously attributed to a French 16th-century workshop or to a South German goldsmith in the early 17th century, but probably no older than mid-19th century.

Marks: None, except for an illegible trace of a mark (?) on the flange of the lid.

Commentary: In Read 1902 this unmarked filigree casket was attributed to a south German workshop in the early seventeenth century; this opinion was repeated in Dalton 1927. In Hayward 1976, under the heading of Renaissance goldsmiths, the casket was attributed to a French workshop and was included in a discussion of the works produced by Renaissance goldsmiths active in France in the mid-sixteenth century; it reads:

‘Also unmarked is the silver-gilt casket in the British Museum (Waddesdon Bequest), the angles of which are set with caryatid figures, while on the cover are figures of Neptune and Amphitrite, their bodies of Baroque pearl. This casket is further ornamented with diamonds and coarse emeralds and leads on to another group of French silver objects that have recently been recognised as proceeding from one workshop that was probably associated with the French court.’

This group, to which the Waddesdon Bequest filigree casket is said to belong, has not yet been the subject of a publication – perhaps because filigree work, whether in silver or gold, is an area in which precise dating and attribution are in general frequently impossible, especially in the period c1500 – 1900. The strong traditional character of much of the work, the widespread use of identical techniques in various parts of Europe as well as in the Orient, and the shortage of marked or well-documented pieces are all factors that prevent the origins of most filigree work from being securely established.

Fortunately, the Waddesdon Bequest casket is not constructed solely of filigree work, like so many examples (see Seling 1980, p.268, pl.321; also Hugh Tait (ed.), The Art of the Jeweller, A Catalogue of the Hull Grundy Gift to the British Museum, London, 1984, vol. I, p.71, nos 400-1: vol. II, p.108, 3 illus). Consequently, when considering it there is more valuable evidence to assess than just the overlay of filigree decoration. There is the modern method of construction of the silver-gilt box, which has to be screwed on to the base before it has a floor; undoubtedly the four projecting screws appear to be original and of nineteenth-century origin. Furthermore, no signs of wear exist in any part of this construction to support an earlier dating. There is also the feeble design of the hinged latch, with its decorative trefoil of three pierced holes and its lack of all the characteristics of a Renaissance court object. The extremely mechanical use of strips of twisted-rope pattern wire and beading can be matched by the crudity of the settings of the coarse gemstones within the filigree rosettes; but in contrast the silver and diamond-set openwork scrolls on the top of the lid are far more competently executed, although their design is typical of the neo-Renaissance of the mid-nineteenth century.

Finally, there is the evidence of the pseudo-Renaissance ‘Baroque’ pearl jewel set in the lid. For a discussion of this class of Renaissance jewellery see Tait 1986, section v, The ‘Baroque’ pearl, pp. 152-73, where both genuine and faked versions are analysed and illustrated, particularly the Nereid and Child pendant (no. 26) and the toothpick pendant (no. 31) with its reference to the current doubts about the authenticity of the Canning Jewel (in the Victoria and Albert Museum). ‘Baroque’ pearl jewels were usually enamelled gold (émail en ronde bosse) and gem-set. There is no evidence that during the Renaissance they were made of silver-gilt with no enamelling at all. Furthermore, the quality of the craftsmanship, especially the modelling of the figures, is indicative of a nineteenth-century workshop. Indeed, it compares closely with the inferior quality of the four caryatids, all of which reveal, on close inspection, signs of their modern origin.

Whether this casket was made as a fake is doubtful because the taste of the mid-nineteenth century, especially in Paris, embraced this type of pseudo-Renaissance, quasi-architectural type of objet de luxe. However, as so often happened with these pastiches, this filigree casket might have been sold to the second or third owner as a genuine work of the Renaissance, and so before the end of the century it had joined a most distinguished collection.