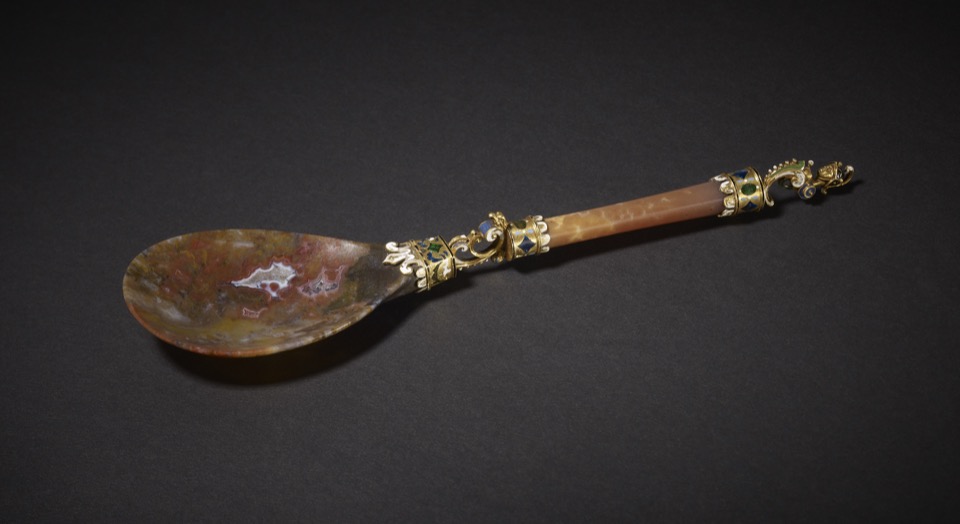 This object was previously owned by August Heckscher, and collected and bequeathed to the British Museum by Ferdinand Anselm Rothschild.

Origin: Uncertain; previously described as 'French (?), late 16th century' but most probably from the Aachen workshop of Reinhold Vasters (1827-1909), goldsmith and faker, second half of 19th century.

Commentary: In Read 1902, and again in Dalton 1927, this spoon was given a tentative attribution: “French (?), late 16th century.” However, a re-examination of the evidence today indicates that it is probably no older than the nineteenth century and was probably made as a deliberate fake by Reinhold Vasters, who first registered his mark as a goldsmith in Aachen in 1853 when he was twenty-six years old.

The few surviving genuine examples with a fully documented history, like the agate spoon and fork with enamelled gold mounts at Burghley House, Lincolnshire, which were described in the 1690 Schedule of Gift (Burghley Archives, Ex. 41/82), tend to be far less ostentatious and extreme in taste (see ‘The Countess' Gems’, exh. cat., Burghley House Preservation Trust Ltd, 1985, p. 19, no. 10, with illus. on p. 20). Indeed, the bowl of the Burghley House spoon is less acutely pear-shaped and the stem and handle are square in section with chamfered corners, whilst the gold mounts are enamelled with a black scroll and red, white or opaque blue flowers and green leaves. This intricate floral design compares closely with late sixteenth-century work of German origin and so, perhaps a trifle optimistically, they have been published as “German, about 1570”.

Similarly, in the Danish Royal collections in Rosenborg Castle are the better-known knife, fork and spoon incorporating polished agate in the handles, bowl and stem, attributed to the workshop of a German, Johann Kobenhaupt, working in Stuttgart between 1609 and 1623 (see ‘Christian IV and Europe’, The 19th Art Exhibition of the Council of Europe, Copenhagen, 1988, no. 686; also R. Sänger, Gold- und silberschmiedekunst , Bergkristall- und Steinschneidearbeiten, ‘Die Renaissance im Deutschen Südwesten’, exh. cat., Heidelberg Castle, Badisches Landesmuseum, Karlsruhe, 1986, no. L. 13). There is evidence that Duke Johann Friedrich of Württemberg sent gifts of this kind to his Danish brother-in-law, Christian IV (reigned 1588-1648), and when the Duke's son had the Order of the Elephant bestowed upon him in 1654 by Frederick III of Denmark, further gifts of Kunstkammer objects went from Stuttgart to Copenhagen. The brown agate of the stem and the two handles is cut and polished with flat surfaces and chamfered corners, whilst the bowl is almost circular with a simple tab-shaped gold enamelled mount. Two of the gold enamelled linking mounts (on the fork and spoon) incorporate white enamelled demi-figures of winged female herms that harmonise with the overall design; the spoon has, in addition, a finial in the form of a miniature figure of a standing youth, also executed in white enamelled gold; as a result, the spoon is 16 cm long. Significantly, the Württembergische Schatzkammer in Stuttgart still contains four spoons and a knife and fork with polished jasper handles and bowls of almost identical form and size - but in more modest, simple mounts of silver-gilt (see M. Landenberger, ‘Kleinodien aus dem Württembergischen Landesmuseum, Stuttgart’, Pfullingen, 1973, col. pl. 42).

The design of the pear-shaped bowl of the Waddesdon Bequest spoon is difficult to parallel among Renaissance examples with a reliably documented provenance. The one example in the Schatzkammer of the Electors of Saxony, the Grünes Gewölbe in Dresden, has significant differences (inv. no. v.2, zz; J.L. Sponsel, ‘Das Grüne Gewölbe’, vol. III, ‘Kleinodien der goldscheidekunst’, Leipzig, 1929, p. 188, pl. 11 (5); Joachim Menzhausen, ‘Das Grünes Gewölbe’, Leipzig, 1968, p. 87, pl. 62). This small spoon (L 11.7 cm) has a handle entirely made of enamelled gold, which terminates in a cherub's head, and its length is set with rubies and pearls (and a later brilliant); only the pear-shaped bowl is made of oriental sardonyx. However, the latter is attached to the handle by such an elaborately wrought gold 'claw' mount of tripartite design that the upper part of the bowl is largely hidden beneath the gold. Apart from the pear-shaped bowl, the differences are so great that they serve only to emphasise the weaknesses in the design of the gold mounts of the Waddesdon Bequest spoon, particularly the feeble enamelled designs on the two cylindrical mounts (at either end of the stem) which are so undistinguished and out of character for a court objet-de-luxe, supposedly executed under princely patronage c. 1600.

Even more problematical, however, is the workmanship of the Minerva finial. In design, it is similar to two fully documented examples: firstly, the agate spoon with gold mounts from the famous Pomeranian Kunstschrank (discussed in the Curatorial Comment for WB.221), made in Augsburg between 1611 and 1615 for Philipp, Duke of Pomerania (Berlin Kunstgewerbe Museum, inv. no. p. 89 - see Tjark Hausmann, Der Pommersche Kunstschrank, ‘Die Brandenburgisch-Preussische Kunstkammer’, Staatliche Museen Preussischer Kulturebesitz, Berlin, 1981, pp. 65-6, no. 1). Secondly, it closely resembles the gold-mounted jasper spoon in the Grünes Gewölbe in Dresden (inv. no. v. 2aaa; see Sponsel III, 1929, p. 186, pl. 10 (3), where it is described as a work from the end of the sixteenth century). This Minerva spoon in the Dresden Schatzkammer has a Saxon jasper bowl of the more typical rounded shape tapering only slightly towards the tip and (at the top) a tab-shaped enamelled gold mount of simple form linking it to the handle of Saxon jasper. The Mannerist pattern on the white enamelled tab-shaped mount is echoed on the two cylindrical enamelled gold mounts at either end of the tubular jasper handle. Both these cylindrical mounts and the enamelled gold scrolling finial in the form of a helmeted Minerva bust are more restrained and elegant than those on the Waddesdon Bequest spoon, and it is easy to see how the maker of the London version might have derived his ideas from the Dresden spoon.

Furthermore, another spoon, almost identical to the Waddesdon Bequest enamelled gold and agate example, was sold at Sotheby's, London, on 17 July 1980, lot 46 (col. pl.), and is now preserved in the Dayton Art Institute, Ohio (see Sobotik 1982, figs 1 and 3). However, in place of agate the bowl and stem of the Dayton spoon are said to be jasper, but linking them and capping the stem are very similar gold mounts, also enamelled with swags of drapery and a pattern of dots, ovals and so on. The Minerva head finial differs in one respect: the face, the neck and breasts are enamelled in white - like the Dresden prototype - and the six projecting beads on the C-shaped scroll (below) are enamelled in red. The enamelling is exceptionally well preserved, even though the upper half of the helmet's white enamelled 'plume' is missing. Indeed, the truncated lower end of the white 'plume' now gives a very curious look to the helmet, especially when viewed in profile.

In this context, it is highly relevant to note that the collection of that notorious Austrian collector/dealer and perpetrator of fakes, Frederic Spitzer (1815-90), contained three almost identical examples of this finial - all attributed to the end of the sixteenth century. Only two, however, were catalogued as Italian for, curiously, the one on the spoon was described as German (see ‘La Collection Spitzer’, Paris, 1890, vol. II, p. 223, nos 37-9, pl. V; also the Paris sale catalogue of the Spitzer Collection (P. Chevallier), 17 April-16 June 1893, lot 2353). They occur as finials on a knife, fork and spoon, each of which has a handle or stem of polished jasper. The three Minerva-head finials are attached to the upper cylindrical mounts in a similar manner to that used on the Waddesdon Bequest spoon and, although these three items were evidently inferior versions on which the maker had economised, using engraved and cast gilt-metal rather than enamelled gold, nevertheless the triple use of the identical Minerva finial is disturbing evidence.

Finally, there is in the Victoria and Albert Museum irrefutable evidence among the thousand or more drawings from the workshop of a proven faker, Reinhold Vasters (1827-1909), the goldsmith-restorer of Aachen, many of whose clever fakes were still in the possession of Frederic Spitzer when he died in Paris in 1890; shortly afterwards Spitzer's vast collection was dispersed by public auction but the fakes were again catalogued as genuine and, apparently, accepted without question. Sufficient evidence has now been accumulated to indicate that Reinhold Vasters may have been working for Spitzer over a very long period, and it is therefore of the greatest significance that two sheets of the Vasters coloured drawings (Victoria and Albert Museum, inv. nos E. 2621-1919 and E. 2622-1919) are the goldsmith's detailed working designs for a spoon of this specific type. The drawing (E. 2621-1919) on a pinkish-brown paper shows the spoon in profile, with the dark greenish agate-like material used for the cylindrical handle and the deeply concave bowl; the two enamelled gold mounts have also been depicted in colour (gold, white, black, red and blue), with the enamelled pattern on the upper mount encircling the agate handle expanded to its full length (on the left). These drawings of the gold mounts have been meticulously cut out at some stage and, subsequently, pasted into their present position. Significantly, a similar operation has been carried out on the second drawing (E. 2622-1919), but it has not affected the upper mount with the Minerva finial - only the three details of the lower mount linking the bowl to the handle (the front view, an alternative mount 'gripping' the top of the bowl, and, on the reverse, the 'spine' gem-set mount, seen both in section and in plan). The most likely explanation for the five 'cut-outs' on these two sheets is the faker's need to offer various 'choices', so that he did not fall into the trap of repeating his work exactly while carrying out fresh commissions for similar objects. Unfortunately the spoon made from these specific drawings has not yet been located, and certainly the three examples in the Spitzer Collection (already discussed above) are, by comparison, very simple, inexpensive versions of this splendid, gem-set, enamelled gold creation.

scrolls). However, the upper mount and Minerva finial on these two spoons bear a striking resemblance to the two sheets of Vasters drawings, except that neither of the spoons has the lower cylindrical band of enamelled gold 'gripping' the upper end of the hardstone handle, nor indeed the projecting black enamelled narrow ring just above it. The Dayton Minerva finial has white enamelled 'flesh' parts, as in the Vasters drawings; similarly, it has a domed section and a cylindrical drum decorated with the same motifs - albeit not, perhaps, exactly to scale in every detail. The swag ornament of the cylindrical drum section is not unlike that used on the square mount 'gripping' the bowl of the Waddesdon Bequest spoon, but otherwise the major point of close similarity is in the Minerva finial itself. The different shapes of the hardstone spoon-bowls and the lack of a gold 'spine' mount on the reverse of both the Dayton and the London spoons add further emphasis to the fact that neither is directly copied from these two Vasters drawings as they are now constituted. Indeed, it may be argued that the 'unexplained' wheel-cut groove on the reverse of the London spoon was originally made to accommodate an enamelled gold 'spine' mount, but that for some reason a more modest and less expensive version was finally commissioned. In the final version the goldsmith, contrary to Renaissance workshop practice, has used a rivet to secure the agate within the square enamelled gold mount that 'grips' the top of the bowl but leaves the wheel-cut groove largely exposed - indeed, the goldsmith's pathetic attempt to elongate one of the 'claws' to extend down the groove serves only to draw attention to the unsatisfactory nature of the solution.

A study of the 1,079 drawings from the Vasters workshop (presented to the Victoria and Albert Museum by Lazare Lowenstein in 1919) confirms the impression that many of the working drawings are undoubtedly lost; final proof of Reinhold Vasters' authorship of the Waddesdon Bequest spoon may therefore never be forthcoming.