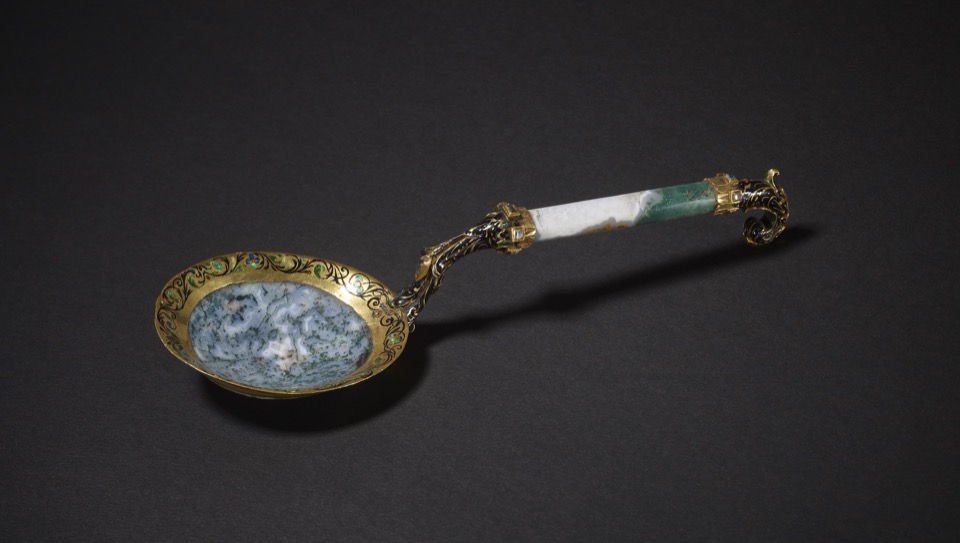 Origin: Uncertain; formerly attributed to a Dutch workshop, c. 1600, but more probably French or German, second half of 19th century.

Commentary: In Read 1902 the origin of this spoon was stated to be “Dutch or French, about 1600”, but in Dalton 1927 it had been changed to read: “Dutch, about 1600”. This attribution was, no doubt, based on a comparison with examples of the widespread fashion in North-west Europe soon after 1600 for delicate gold scroll designs to be seen against a black enamelled background - often in combination with elongated leafy forms. There is no finer - nor better-documented - example of this taste than the gold sceptre (L. 51 cm) and orb (H. 12.5 cm) that King Gustavus Adolphus of Sweden ordered for the burial regalia of his mother, Queen Kristina, who died in 1625 and was buried in 1626 in the Cathedral of Strängnäs; both orb and sceptre were removed from the coffin in 1830 and since 1980 have been deposited in the Livrustkammaren at the Royal Palace in Stockholm (see K. Holmquist, in ‘Princely Magnificence, Court Jewels of the Renaissance, 1500-1630’, ed. A. Somers Cocks, exh. cat., Victoria and Albert Museum (Debrett’s Peerage Ltd), London, 1980, pp. 95-6, no. 126e-f, with col. pl.). Whilst the black enamelled head of the sceptre is composed of pierced elongated and overlapping leaves, the feathery scrolling ornament covering the sceptre and orb is offset by the black enamel; only on the horizontal and vertical bands of the orb are the delicate foliate and floral scrolls enamelled in black on bright gold - just as on the inner surface of the rim-mount of the moss-agate bowl of this spoon. However, the quality of the enamelling on the spoon is markedly inferior to that found on the documented pieces of the early seventeenth century. Therefore, in the light of present-day knowledge, failure to consider the possibility that this spoon might be the product of a nineteenth-century workshop would be unwise; consequently the following critical assessment is cautiously presented.

When discussing the evidence for re-attributing the agate Minerva spoon (WB.211) it was possible to cite the existence of closely related drawings from the Aachen workshop of the faker Reinhold Vasters (1827-1909), but no such evidence has yet been brought to light in connection with this moss-agate and chalcedony spoon. Therefore, although the Vasters workshop was undoubtedly engaged in making this type of pseudo-Renaissance hardstone spoon with enamelled gold mounts - even setting it with table-cut gemstones, as two of the drawings demonstrate - the particular designs for this moss-agate spoon, including the two very distinctive mounts (at the junction with the bowl and the end of the stem) have not been preserved among the 1,079 drawings from the Vasters workshop presented in 1919 to the Victoria and Albert Museum. Furthermore, there is no Vasters drawing of a hardstone bowl of a spoon set in an encircling mount of enamelled gold. Consequently, despite the similarity of the enamelled decoration of the gold mounts with proven Vasters fakes, this moss-agate and chalcedony spoon cannot be conclusively shown to have originated in Aachen - and, of course, there were other fakers in this field supplying the markets especially in Vienna, Paris, London and Rome.

Nevertheless, there is one closely related piece among the more spectacular of Vasters' proven fakes: it is the gem-set and enamelled gold bail- or hoop-handle on the large rock-crystal bucket-shaped bowl (20.3 x18 cm; Robert Lehman Collection, Metropolitan Museum of Art, inv. no. 1975, 1-1, 1496), which corresponds exactly with the Vasters coloured drawings for this bail-handle in the Victoria and Albert Museum (E. 3458-1919; see Y. Hackenbroch, Reinhold Vasters, Goldsmith, ‘The Metropolitan Museum Journal’, vol. 19/20, New York, 1986, p. 196, figs 68-9). This bail-handle terminates in a similar curling crook that loops through the hinged suspension ring at either side of the gold rim-mount of the bowl; although each of the two curling crooks has an eagle's head at the end, the curling section is (in both cases) decorated with thin gold lines silhouetted against a black enamel background. Furthermore, the Robert Lehman Collection bail-handle demonstrates Vasters' habit of introducing linking motifs (or elements) that are not taken from the repertoire of Renaissance ornament but are entirely his own invention. In this case, the bail-handle is composed of two pairs of dolphins; each pair is designed so that the heads of the dolphins are facing towards each other but with a gap in between (almost 20 mm). To bridge this gap, Vasters has invented an angular linking element of unique and unrecognisable form, set with diamonds in its central collar and decorated with thin gold lines against a black enamelled background. Although the moss-agate bowl of the spoon is linked to the stem by a gem-set gold enamelled mount of different form, it is an equally unrecognisable motif, executed in a very comparable manner. No late Renaissance source for this mount at the junction with bowl and stem can be traced and, similarly, none appears to be known for the curving crook at the end of the stem.

Even the elongated wheel-cut groove on the reverse of the moss-agate bowl, which might be expected to be a necessary and integral part of the design of the mount linking the bowl to the stem, is reduced to a meaningless feature. Instead of serving as a channel for the long gold tongue of the mount, the wheel-cut groove is largely unused and, contrary to Renaissance workshop practice, a rivet piercing the moss-agate bowl fastens the gold mount to the top of the rim-mount that encircles the inner surface of the bowl. Perhaps it is, therefore, doubly significant that Vasters seems to have similarly misused the wheel-cut groove on the agate Minerva spoon (WB.211), where he has rendered it superfluous by once again resorting to a very short-tongued gold mount and to driving a rivet through the mount and the agate bowl.

Finally, there is no obvious reason why the rim of the moss-agate bowl should be protected by a gold rim-mount - and none of the well-documented examples in the Renaissance Kunstkammer collections of Europe and Istanbul (Topkapi Saray Museum) seem to have been mounted in this way. However, there are two spoons in the 'late Gothic style' - one in the Musée des Antiquités, Rouen, and another in a private collection in Venice -which have rim-mounts encircling the hardstone bowls. These two very dubious examples may be no older than the nineteenth century (see WB.209). It is, therefore, possible that a modern workshop, having made pastiches of late medieval spoons with hardstone bowls 'protected' by rim-mounts, might not question its correctness when subsequently creating pastiches of late Renaissance spoons. Many of these early fakers were craftsmen who, like Reinhold Vasters, had begun their careers as restorers working in medieval ecclesiastical treasuries, where the experience of dismantling and repairing these medieval and Renaissance objects taught them about the old techniques of enamelling and goldsmiths' work. However, in designing this spoon a sound knowledge of the repertoire of Mannerist style and forms was also needed and, as with the Robert Lehman Collection bail-handle, the parts that were the craftsman's own invention are the most revealing. Although proof may never be established, nevertheless the inaccuracies and inconsistencies of this spoon make it unlikely that it was made before the nineteenth century.