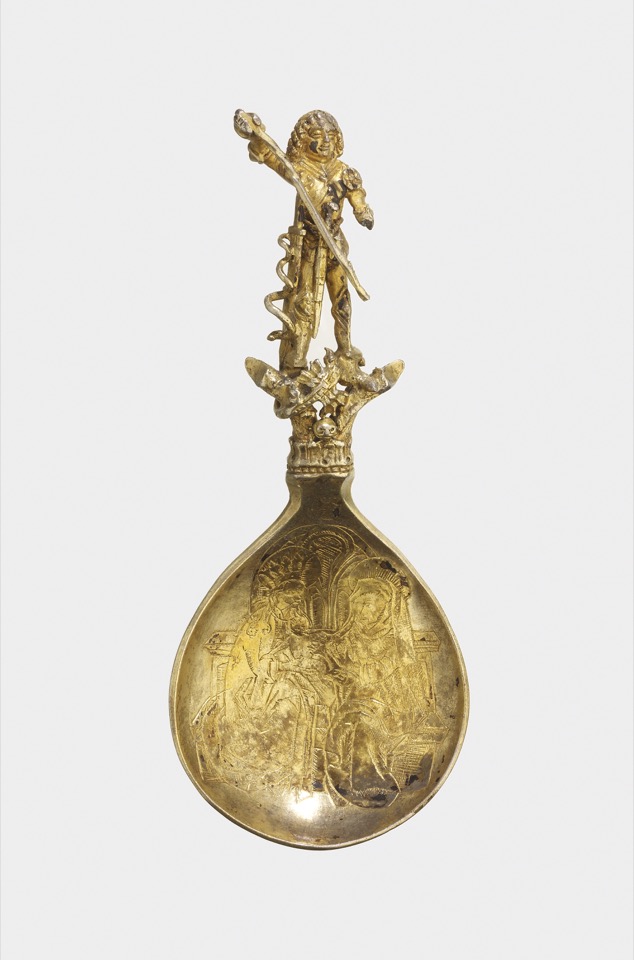 15b has St George and the Dragon on the handle.

Spoon; silver-gilt; bowl engraved with Virgin and Child with St Anne; handle modelled to represent St George in armour piercing the dragon; armed with sword and long dagger; back of bowl with engraved fleur-de-lis; inscribed.

Origin: Malmö (modern Sweden), end of 15th century; hallmark of Malmö (at that time within the kingdom of Denmark).

Marks: Immediately above the engraved scene the bowl has been struck with the Malmö hallmark: a crowned head of a griffin. The punch-mark is in the thick, narrowing part of the upper bowl.

On the reverse, just below the stem, is a crisply engraved double fleur-de-lis above the letter P, under which is engraved the number 13.4.9.

Commentary: Despite the repairs to the figure group of St George and the Dragon and the later gilding, this spoon is important, being a rare survivor from that group of late medieval luxury silver originating in the Western Baltic.

Hitherto, although this spoon has been published as a product of the late fifteenth century, it has always been described as 'North German', because in none of those three publications - in 1902, 1927 and 1966 - had the punch-mark been identified. However, the series of hallmarks of Malmö have been drawn and authoritatively published in O. Källström, ‘Svenskt silversmide 1520-1850’ (Stockholm, 1941),p. 435, where nos 5841-61 are variants of the 'crowned griffin' punch-mark and where nos 5844 and 5854 are the most comparable, especially no. 5854, with the mark on the bowl of the Waddesdon Bequest spoon. A clear photographic detail of a Malmö hallmark stamped on a much less elaborate but near-contemporary silver spoon is reproduced in Göran Axel-Nilsson, Om silverskedar med s. k. polyederknopp, ‘Röhska Konstslöjdmuseet Årsbok 1965-66’, p. 8ff., fig. 2. This spoon (L. 11 cm) has a short but fully developed stem, with a polygonal knop and, although the punch-mark is similar, it is not identical nor is it struck on the front of the bowl; it accompanies the maker's punch-mark on the reverse of the stem, close to the join with the back of the bowl. Indeed, the rare surviving examples from Malmö indicate that it became customary for the town-mark and the maker's mark to be struck on the reverse of the spoon - unlike the late fifteenth- and sixteenth-century practice in England, where, for example, the London Assay Office leopard's head mark is not infrequently punched on the front of the bowl (upper part), leaving the maker's mark and date-letter to be punched on the reverse of the stem (see G. E. P. How and J. P. How, ‘English and Scottish Silver Spoons’, 3 vols, London, 1957, I, pp. 64-7, 82-139, 222-73, 278-9; also, S. Hare, ‘Touching Gold and Silver: 500 Years of Hallmarks’, exh. cat., Goldsmiths' Hall, London, 1978, nos 7, 8, 27, 44). In the case of the Waddesdon Bequest spoon there is no trace of a maker's mark, and perhaps for that reason and the fact that it is a very early example the Malmö hallmark was struck high up on the front of the bowl. Its rubbed and partly illegible quality is consistent with a punch-mark struck approximately 400 years ago.

In contrast, the engraving of the reverse of the bowl lacks wear and appears not to be original. Its meaning is uncertain, but most probably it should be read as a later owner's device and inventory number. Alternatively, it may have been added in the nineteenth century to give the false impression that the spoon had not only been made before 1349 but that by that date it was owned by a noble family. Indeed, the idea could have been copied from the reverse of the similar spoon in the National Museum, Copenhagen (inv. no. DCCXLIV; see J. Olrik, ‘Drikkehorn og Sølvtøj’, Copenhagen, 1909, pp. 90-1, no. 22, figs 18-19), which is engraved with a shield bearing three double fleurs-de-lis and long since identified as the coat of arms of the Danish noble family of Lungesloegt. Like the Waddesdon Bequest spoon, this spoon has virtually no stem and has a figure group of St George and the Dragon directly joined to the engraved bowl and thereby serving as a handle.

Although there are significant differences between the two figure groups, the two standing figures of St George have many details in common. However, the Copenhagen spoon, which measures 13 cm in length, has long been dated “about 1500”; consequently the addition of the engraved number 13.4.9 (on the reverse of the Waddesdon Bequest spoon) is less likely to have been regarded as a convincing date for this type of spoon than as an owner's inventory number, especially as it is preceded by a P. Furthermore, the style of the engraving on the front of the bowl is not only unmistakably different from that of the mid-fourteenth century but can be matched on three other exceptional Scandinavian silver spoons, all well known and published as “circa 1500”.

Firstly, a Danish hoard deposited in the seventeenth century and rediscovered in 1848 at Mesinge contained a strikingly similar silver spoon with the figure of a crowned standing Madonna and Child rising from a very short stem (see Fritze Lindahl, ‘Skattefund: Danish Seventeenth-century Silver Hoards’, National Museum, Copenhagen, 1988, p. 32, fig. 12 and no. 14, pp. 113-15, with illus.). The bowl, which bears (on the reverse) a largely obliterated unidentified punch-mark (fig. 99 in Lindahl 1988), has, on the front, two engraved ribbons of elegant design. The spoon is 12.3 cm long and has been dated to the beginning of the sixteenth century.

Secondly, an even closer parallel is the spoon engraved with St Anne, preserved in the Statens Historiska Museum, Stockholm (inv. 13797; see Carl R. Af Ugglas, ‘Senmedeltida Profant Silversmide i Sverige’, Stockholm, 1942, pp. 132-3, fig. 79). In form it is extremely alike, having hardly any stem to support the figure of a crowned St Catherine and having a very comparably shaped bowl. The style of the engraving on the bowl - (front) the seated St Anne, with the young Mary and Christ Child, (back) St Christopher carrying the Christ Child over the river - has strong similarities, although these are not as close as the similarities of form. Certainly, if the hand responsible for the decoration of both spoons was the same, then the sources available to the engraver were different. However in the quick linear manner of depicting the faces and hands, for example, the two spoons have much in common, and again the engraver's technique of cross-hatching is not dissimilar, though more sparingly used on the Stockholm spoon.

Thirdly, another spoon engraved in a closely related manner is preserved in Vienna (Österreichisches Museum für angewandte Kunst, inv. no. GO 1527; see Fritz 1966, p. 380, no. 769, fig. 304, where it is dated to “the end of 15th century”). St Anne is depicted seated on a similar architectural 'throne', with the young Mary seated on her knee learning to read and the Child playing in front of their voluminous robes - the group is stated to be based on a Meckenems engraving. Indeed, German prints of the late fifteenth and early sixteenth centuries were widely circulated, and the goldsmiths and engravers of Scandinavia could be expected to copy and adapt them to their own needs.

The well-known silver spoon engraved with St Barbara, c. 1500 (in the Statens Historiska Museum, Stockholm, inv. no. 3121:8), is a distinct variant of this category of luxury silver spoons from the Baltic region and may, indeed, have some connection with the products of Lübeck (see J. M. Fritz, ‘Goldschmiedekunst der Gotik in Mitteleuropa’, Munich, 1982, p. 279, no. 666, where there is a reference to its publication (with illus. of front and back) in Ugglas 1942, p. 146, fig. 80). The shape of the bowl and its relationship to the stem are quite distinct from those discussed so far; furthermore, its figural 'handle' (St Catherine) stands on a straight - albeit short - stem. Indeed, this trend towards a longer and a more pronounced form of stem characterises the development of luxury Scandinavian silver spoons of the mid-sixteenth to mid-seventeenth centuries.

The Waddesdon Bequest spoon may, therefore, be among the earliest of this small group to have survived and, indeed, the style of the St George and the Dragon figure group serves only to confirm this impression. Both the armour and the hair of the Saint were in fashion in the second half of the fifteenth century. Among many contemporary Scandinavian or Baltic sculptures of this subject, the corkscrew tail of the Dragon tends to be a prominent vertical feature of the composition. However, this feature was probably not confined to the Baltic region and, indeed, appears in a silver pendant of St George and the Dragon (in the Bayerisches Nationalmuseum, Munich). It is yet another example of the uncertainty that continually surrounds these unmarked objects, and although it can be reliably dated to the fifteenth century, it was as recently as 1987 still cautiously attributed to “Süd-Deutschland (?)' (Lorenz Seelig, ‘Der Heilige Georg im Kampf mit dem Drachen’, Bayerisches Nationalmuseum Bildführer 12, Munich, 1987, p. 60, fig. 47). This standing figure of the Saint, especially his hair, armour and general pose, compares closely with the figure group of the Waddesdon Bequest spoon. Even the small dragon, with its long tail coiling around the right leg of the Saint and its upturned jaws pierced by the lance, has a strong family resemblance, despite its lack of the normal pair of wings.

The Danish Royal Kunstkammer at Rosenborg Castle is known to have contained at least one of these late Gothic silver spoons (now preserved in the Nationalmuseum, Copenhagen, inv. no. 10700; see I. Olrik, ‘Drikkehorn og Sølvtøj’, Copenhagen, 1909, p. 91, no. 23, fig. 20; Lightbown, ‘Catalogue of Scandinavian and Baltic Silver’, Victoria and Albert Museum, London, 1975, pp. 57-9, figs 14e-g). Although its engraved bowl and highly sculptural 'stem handle' are far more elaborate than most of the other recorded examples, there is little doubt that the simpler Waddesdon Bequest example would also have been collected in the nineteenth century as a rare Schatzkammer object - a fine, albeit imperfect, example of this small group of luxury spoons from the Baltic dating from the late fifteenth and early sixteenth centuries. Outside Scandinavia few have been recorded and, now that its punch-mark has been identified, this spoon's documentary significance as a rare work of quality from the flourishing goldsmiths' guild of Malmö, at a time when the prosperity of the Baltic trading cities was at its height, makes it an object of special historical interest.