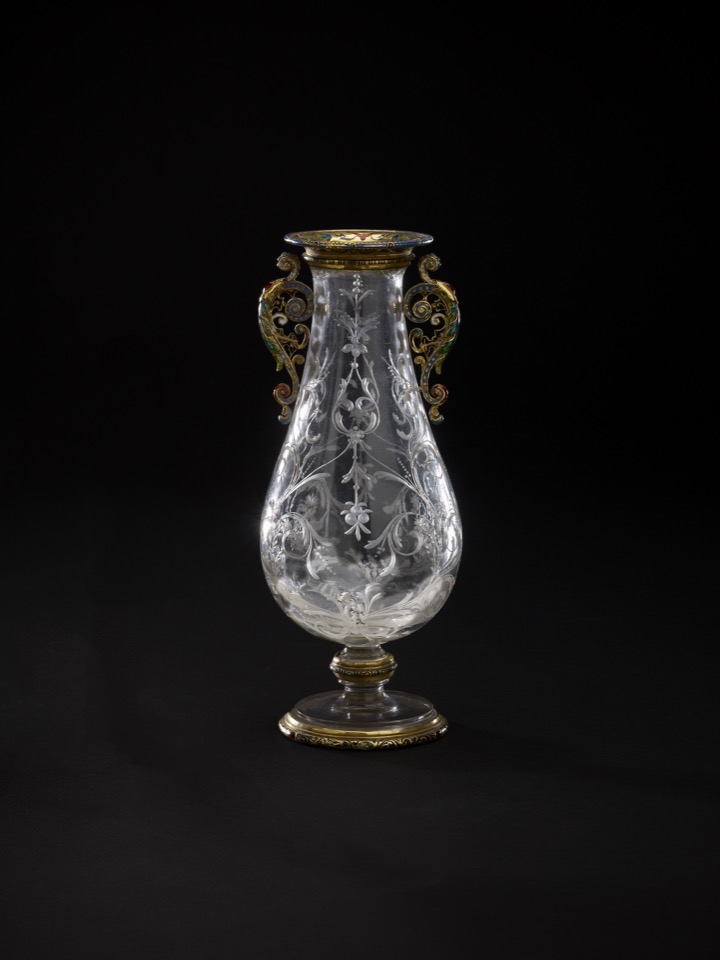 The rock crystal engraving is different on the two vases. The addition of identical mounts made these into a pair for collectors.

Commentary: Because of the very marked differences, both in the design of the engraved decoration and in the quality of certain technical details, it has now been concluded that the two vases were probably not brought together until the middle of the nineteenth century, when they were given the appearance of a pair by the addition of identical mounts and replacement bases. If either vase had been made in modern times specifically to form a pair, then a less contrasting form of decoration could have been expected.

In their individual ways, both vases appear to be the very modest products of a workshop influenced by the Miseroni and, therefore, attributable to Milan or Prague in the first half of the seventeenth century. Both vases faintly echo the earlier masterly achievements of the workshops of the Miseroni, like the covered vase in the Grünes Gewölbe, Dresden (see E. Kris, ‘Golschmeidearbeiten des Mittelalters, der Renaissance und des Barock. I Teil: Arbeiten in Gold und Silber’, Publikationen aus den Kunsthistorischen Summlungen in Wien, Band 5, Vienna, 1932, p. 186, no. 562, pl. 165, where it is attributed to Milan towards the end of the sixteenth century), or the later minor pieces by Ottavio Miseroni (died 1624 in Prague), such as the little vase of smoky quartz engraved with scrolls and festoons in Vienna (Kunsthistorisches Museum, inv. no. 1507; see R. Distelberger, Beobachtungen zu den Steinschneidewerkstatten der Miseroni in Mailand und Prag, ‘Jahrbuch der Kunsthistorischen Sammlungen in Wien’, Vol. 74, 1978, pp. 79-152, fig. 135, also, figs 126 and 127, illustrating two very different bowls on low stems that have been decorated with the ubiquitous feathery scrolls of the Miseroni workshop in Prague).

The restrained use of the engraved festoons and scrolls on these two miniature vases can be compared with the equally elegant application of similar ornament on the sides and base of an unpublished two-handled shell-shaped sea-monster bowl, which entered the British Museum in 1753 as part of the foundation collection of Sir Hans Sloane (SL. 50). It is complete with its original gem-set, painted enamel mounts to join the handles to the sides and to protect the foot-rim; in style, the enamelling, with its pale blue background and white scrolls 'picked out' in brownish-red, is typical of the mid-seventeenth-century fashion that spread from France and the Netherlands to all parts of Europe. Its origin in the Miseroni workshop in Prague seems highly probable and, significantly, the workshop has sought to hide blemishes in the tiny rock-crystal by engraving a flying bird (near the rim) and small winged insects -just as had been done on WB.78B. The competent relief carving of the sea-monster's head is less subtle than that on the Sir William Hamilton Vase but, in the perfunctory engraving of the eyebrows and whiskers of the sea-monster, the Sloane Collection two-handled bowl provides convincing evidence of the decline in standards by the middle decades of the seventeenth century, especially in executing the fine details on the more modest products of the workshops of the Miseroni and their contemporaries. Several small-scale minor pieces of rock-crystal have survived in the French royal collection, dating mainly from the reign of Louis XIV, and can be seen in the Galerie d'Apollon at the Louvre. Some have similarly unambitious wheel-engraved decoration and simple enamelled gold mounts.