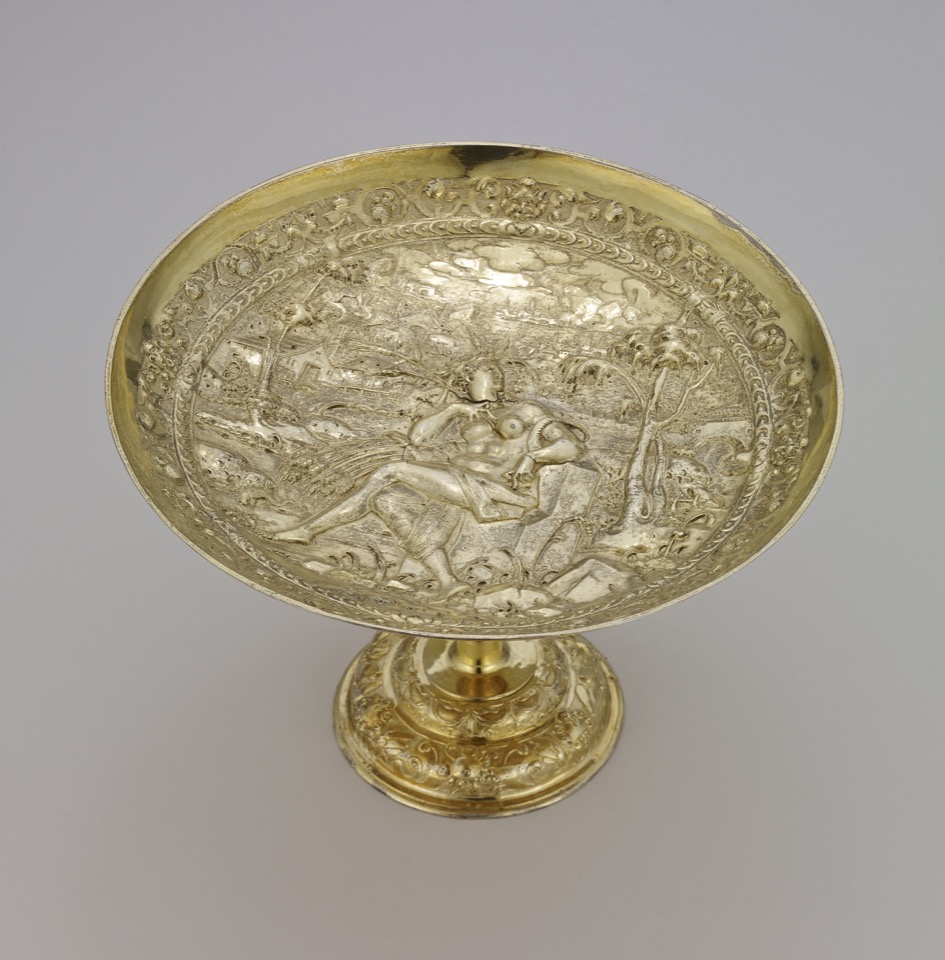 Commentary: The beautifully modelled nude figure is a more elegant version of the Jost Amman woodcut published posthumously in the ‘Kunstbüchlein’ of 1599 (Weber 1970, p. 345, fig. 23). Not only have the proportions of the figure been slightly elongated by Hübner, but the head has been given a new meaning by tilting it backwards and turning it into sharp profile. Although the 1594 tazza of Earth (in the Palazzo Pitti: see Weber 1970, p. 345, fig. 23) is almost identical, it is interesting to note that the head is not in profile and the figure has been discreetly clothed, covering both breasts, and given buskins to wear. There can be little doubt that this departure from the Jost Amman woodcut can only have been made to satisfy the special requirements of Paul Hübner's patron, the Archbishop of Salzburg, whereas the Waddesdon Bequest set was evidently commissioned by a more worldly client.

The exceptional inclusion of the lizard serves to emphasise the regular absence of all such naturalistic details. None of Hübner's eleven tazze in this set has birds flying in the sky, cattle in the fields or insects on the ground. Raimund Laminit's Charity tazza (cat. no. 24) did have some of these details, but this lizard is the only example - significantly, Hübner's source, the Jost Amman woodcut, has not only a lizard but a snake and a snail near the feet of Earth. It may be that Hübner regarded the lizard as an emblem rather than a naturalistic detail, just as the lamb in Patience and the bird perching on the hand of Air have a special meaning. Again, it seems unlikely that Laminit would have introduced the trivial naturalistic details into his Charity tazza if, as has been suggested, he had executed it towards the end of the 1590s; by then, the pattern for this set had been established. It would seem more likely that by the early 1590s his anecdotal, old-fashioned approach to these compositions was out of date and so the order was cancelled and placed elsewhere; by contrast, Hübner's 1594 solutions must have seemed truly avant-garde.