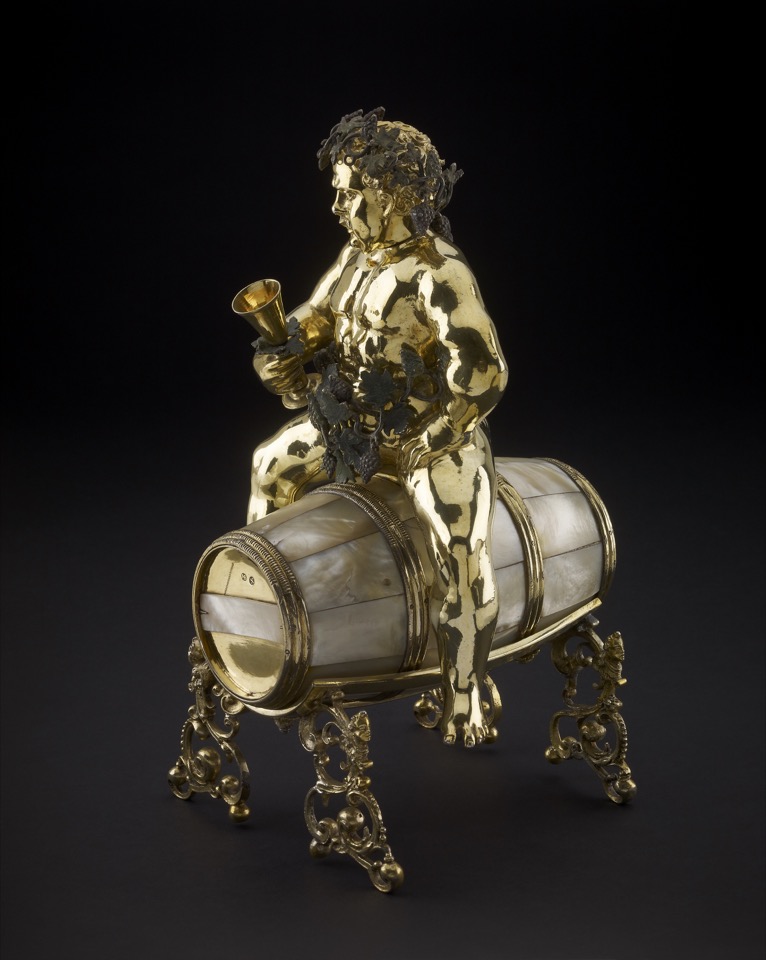 The drunken Bacchus sits on a wine barrel as a joking reminder of the dangers of drunkenness. Combining exotic pearly shell with silver sculpture, this figure typifies art designed for the courtly collections (Kunstkammern) of baroque Europe and was acquired by Baron Anselm Rothschild before 1838.

Table ornament in form of youthful naked Bacchus astride barrel, crowned and encircled with vine and holding a cup; figure and mounts of silver-gilt; barrel made of staves of pearl shell, set upon a frame with four scroll legs, cupid's head on each; head of Bacchus is removable; inscribed. Openwork.

Meinrad I Bauch
Mark: Meinrad Bauch the Elder, shell from the Indo-Pacific

Marks: The pair of punch-marks (the town-mark and the maker's mark) are struck three times: on the flange of the detachable head and on both ends of the barrel.

(ii) The initials MB in a circular punch: the punch-mark of Meinrad Bauch the Elder (R3 3993).

Commentary: Meinrad Bauch the Elder (master 1575, died 1623) was the son of the Nuremberg goldsmith Caspar Bauch, who died in 1583 having become a master in 1541. Meinrad's brother Caspar was also a Nuremberg goldsmith, becoming a master only a few years before he died in 1592. Meinrad's son (Meinrad II) followed in his father's footsteps, becoming a master in 1612, eleven years before his father's death; he did not die until 1633. Consequently, the members of this Bauch family were active in Nuremberg for almost a century at a time when the reputation of Nuremberg's goldsmiths was at its height.

In Rosenberg in, 1925 (p. 119), there are listed eighteen extant works of Meinrad Bauch the Elder, including the Waddesdon Bacchus on a barrel figure. The first two pieces on Rosenberg's list are also described as “Trinkgefäss in Gestalt einer Bacchusfigur auf einem Fass reitend” - apparently the same as the example now in the British Museum. Of these two, the first is stated to be “mit Perlmutter, H. 26.5 cm” and to be in the Grünes Gewölbe in Dresden. It is, therefore, particularly regrettable that in Jean-Louis Sponsel's magnificent four-volume catalogue ‘Das Grüne Gewölbe z.u Dresden’, published between 1925 and 1932 in Leipzig, this piece is not included, although in Rosenberg 1925 there is a reference to J.-L. Sponsel, ‘Führer durch das Grüne Gewölbe’ (Dresden, 1921, p. 123, IV 265).

No subsequent publication about the silver-plate in this historic royal collection of Saxony, housed in the Grünes Gewölbe, has referred to this lost work of Meinrad Bauch the Elder, which - with its mother-of-pearl and similar dimensions - may have been very closely related to the masterpiece in the Waddesdon Bequest. Similarly, the whereabouts of the second version, listed by Rosenberg in 1925 as in a private collection in Stuttgart, are at present unknown and, although its height measured 31.5 cm, it appears to have been similar to the Waddesdon Bequest example.

The representation of the drunken Bacchus as a mature man prematurely obese seems to have been attempted by several of the leading German goldsmiths in the second half of the sixteenth century, although the Erasmus Hornick drawing of 1560 which depicts a flask decorated with a Bacchic scene portrays the seated Bacchus as a youthful, Adonis-like nude (in the Victoria and Albert Museum - see J. F. Hayward, ‘Virtuoso Goldsmiths and the Triumphs of Mannerism 1540-1620’, Sotheby Parke Bernet Publications, London, 1976, p. 353, pl. 157). One of the earliest and, perhaps, most influential sources for this mature, but corpulent, Bacchus figure was the Cornelis Bos print of 'The Triumph of Bacchus', signed and dated 1543 (see S. Schéle, ‘Cornelis Bos: a study of the origins of the Netherlands grotesque’, Stockholm, 1965, pp. 126-9, pl. 18, where it is convincingly argued that this Antwerp print was inspired not by Giulio Romano, as previously published, but by Martin Heemskerck (Rainald Grosshans, ‘Maarten van Heemskerck’, Berlin, 1980, pp. 126-30, no. 24, pl. 185). The Netherlandish influence on mid-sixteenth-century German artists and craftsmen was particularly strong, and it is interesting to note that in 1567 a Strasburg goldsmith, Georg Kobenhaupt, used the more mature, ageing image of Bacchus in his extremely unusual Bacchusbecher (H. 35 cm) with its enamelled coat-of-arms of the Counts of Hanau-Lichtenberg. This historic piece of plate survived in the Darmstadt collections and was lent by the Schlossmuseum, Darmstadt, to the Exhibition at Heidelberg Castle in 1986 (see R. Sänger, Gold- und silberschmiedekunst , Bergkristall- und Steinschneidearbeiten, ‘Die Renaissance im Deutschen Südwesten’, exh. cat., Heidelberg Castle, Badisches Landesmuseum, Karlsruhe, 1986, p. 630, no. L. 26 with col. pl. and bibl. including a reference to a doctoral thesis on the goldsmith Georg Kobenhaupt, submitted by Ulrike Jaenchen in 1977). The goldsmith has created a silver-gilt cup in the form of an upturned barrel in which is standing the figure of a middle-aged, moustached Bacchus with a garland of grapes on his head; his shoulders and arms are outside the top end of the barrel, while his ankles and feet, which emerge below the bottom end of the barrel, are standing on a wooden tub filled with grapes. The wooden tub and a decorative foot-rim form the base of this extraordinary cup, which bears the inscription “Bachus von Jupiter und Semele geboren - ein zart schöner Jüngling auserkoren”. The barrel is fashioned in a very similar manner, though without the application of mother-of-pearl staves - a refinement that Meinrad Bauch the Elder seems to have favoured.

There is, for example, in the Hermitage Museum, Leningrad, a most sophisticated use of mother-of-pearl on a silver-gilt beaker by Meinrad Bauch the Elder (see Hayward 1976, p. 389, pl. 525). The tall cup (H. 22 cm) can only be stood on the rim of the bowl, for it is designed in the form of a woman carrying a basket of exotic fruits

on her head and supported by her upraised arms; the stem is the upper part of her elegantly chased and waisted dress, while the skirt, forming the bowl, is most skilfully covered in plaques of mother-of-pearl, graduated in size and beautifully shaped to convey the layers of taffeta. Each plaque is pinned using a silver nail with an elaborately decorative head. A broad silver rim with engraved ornament gives the cup a certain stability for, if ever used, the contents would have to be drunk before setting the beaker down on the table - no doubt it was commissioned as a courtly version of the more plebeian drinking sports, and its seductive female form would certainly have lent a Rabelaisian touch of humour to the occasion.

Few extant pieces of German silver illustrate contemporary humour on the subject of drinking better than the famous Dresden Wheelbarrow group by Christoph Lindenberger of Nuremberg (master 1546, died 1586), whose skill is represented in the Waddesdon Bequest by the Tucher cups (see WB.101). This mid-sixteenth-century masterpiece has been preserved in the Saxon Electoral Kunstkammer (see J.L. Sponsel, ‘Das Grüne Gewölbe zu Dresden’, vol. II, Leipzig, 1928, p. 160, pl. 5; also ‘The Splendor of Dresden, Five Centuries of Art Collecting’, Metropolitan Museum of Art, New York, 1978, p. 79, no. 24, with illus.; and C. Hernmarck, ‘The Art of the European Silversmith, 1430-1830’, 2 vols., Sotheby Parke Bernet Publications, German edn, Munich, 1978, fig. 184), and in its imagery and use of rhyming inscriptions is without parallel. According to one of the inscriptions, 'God Bacchus' himself is the disgustingly obese bearded glutton seated in the wheelbarrow that is being pushed along by the devil, dressed in a wine barrel, hung with kitchen utensils and food. Bacchus wears the cuckold's hat adorned with pilgrims' cockleshells and proclaims in two of the inscriptions: “I took my pleasure with the beautiful wenches so much that now I have to be carried along like this. Therefore, let my Epicurean life be recommended to everybody. Whenever he is thirsty, even early in the morning, he will find me ready to join him night or day.”

Few of these exceptional court pieces of silver have survived to show that the middle-aged, gross and corpulent Bacchus figure was, perhaps, the more usual image chosen by the German goldsmiths. There is, for example, in the Hapsburg collections (Kunsthistorisches Museum, Vienna, inv. no. 959 - illustrated in H. Seling, ‘Die Kunst de Augsburger Goldschmiede 1529-1868’ 3 vols., Munich, 1980, p. 252, fig. 177) a drinking vessel in the form of a Renaissance classical triumphal car - the Triumph of Bacchus by the Augsburg goldsmith Sylvester Eberlin the Elder, c. 1590 (H. 43 cm). The decoration of the triumphal car, including the satyr at the front and the boy Bacchus riding the recumbent goat on the top, retain perhaps a slightly Italianate quality, but the gross figure playing the bagpipes at the back of the triumphal car belongs more convincingly to the contemporary Germanic idiom.

This preference for the ageing Bacchus seems to have lived on among the Nuremberg goldsmiths into the middle of the seventeenth century. Fortunately a closely related, dated drawing has been discovered among the important collections of the University of Erlangen (inv. no. VB 45 - see ‘Wenzel Jamnitzer und die Nürnberger Goldschmiedekunst 1500-1700’, exh. cat., Germanisches Nationalmuseum, Nuremberg, 1985, pp. 136 and 361, no. 335, fig. 109). It bears the inscription “Riter Goldschmied in Nürnberg 1654” and has been accepted as the work of the goldsmith Christoph III Ritter (master 1633, died 1676), who was the son of Jeremias Ritter (brother of the maker of the huntsman automaton in the Waddesdon Bequest, WB.134). The drawing depicts an unearthly scene, with the goddesses Venus and Juno accompanied by Cupid and other amoretti and the third principal figure - Bacchus. He is seated naked with his sagging body prematurely corpulent and his head, tilted slightly downwards and to the right, crowned with a garland of grapes and vine-leaves. With the double chin and smooth face, this drawing of Bacchus is a remarkably similar though more relaxed version of Meinrad Bauch the Elder's silver figure astride the wine barrel.