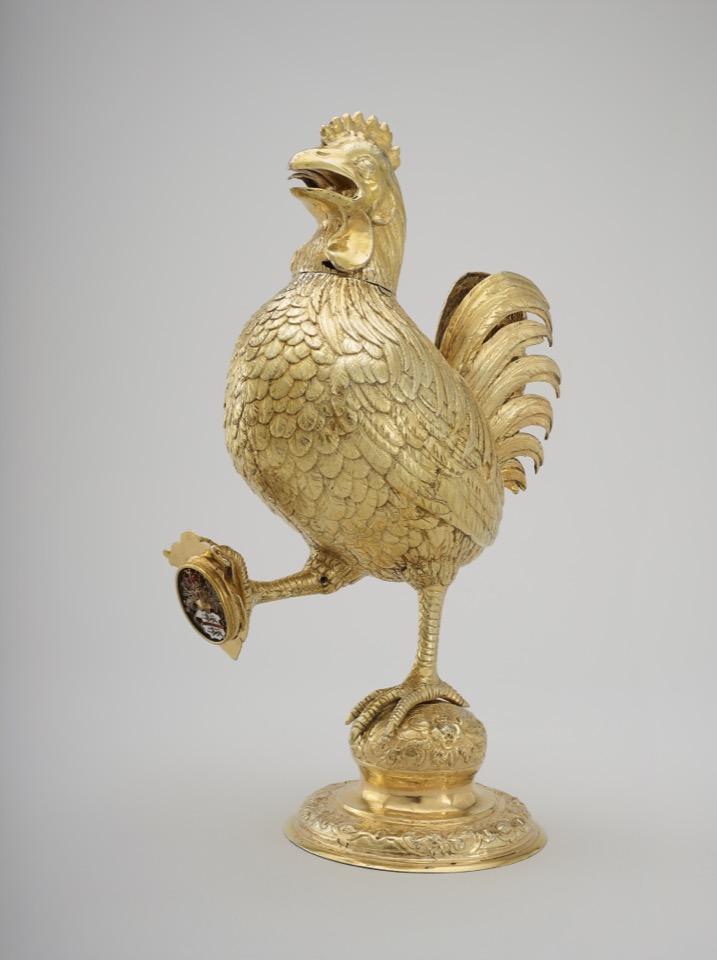 Standing cup; silver-gilt; chased; form of cock standing on one leg and holding escutcheon with oval shield of arms, enamelled and modern, in other claw; high foot embossed and chased with fruit; head removable; inscribed.

Origin: Uncertain; previously attributed to the Nuremberg workshop of Wolf Straub (master 1618, died 1644) on the evidence of the two sets of marks stamped on the foot-rim and the head; probably a modern faked reproduction.

Marks: The two marks are close together on the foot-rim; these are repeated (less clear but still legible) on the head 'collar':

Commentary: In Read 1902 the shield of arms was catalogued as 'modern', and this statement was repeated in Dalton 1927, where Rosenberg's 1925 revised identification of the mark of the maker was correctly quoted but without making the necessary corresponding revision of Read's previous dating of the cup: “about 1570”. Wolf Straub, born in 1583, was the son of the Nuremberg goldsmith Christoph Straub. Wolf became a master in

1618 and died in 1644 in Nuremberg. It is, therefore, very unlikely that this standing-cup could have been made before about 1620.

The reason for doubting the authenticity of this piece is the way in which it has been made and the existence of another example, virtually identical in outward appearance. This second version (H. 31 cm) has been known to the author since 1963 through a private communication from Dr Rainer Rückert, of the Bayerisches Nationalmuseum, Munich, who most kindly reported examining it in a Munich antique dealer's possession and establishing that the three marks on it are, firstly, the town-mark of Augsburg (R3 131), secondly, the duty mark (R3 5911) and, thirdly, the maker's mark of Jeremias Mich(a)el (R3 469).

This last mark has since been published in H. Seling, ‘Die Kunst de Augsburger Goldschmiede 1529-1868’ 3 vols., Munich, 1980, (no. 1221); moreover, the Munich cock was not only included by Dr Seling in his short list of five extant works by this maker (p. 139) but was also illustrated (see fig. 154, with the caption: “um 1613-1615: ‘Kunsthandel’”). Dr Seling, however, makes no reference to the Waddesdon Bequest's identical version by Wolf Straub of Nuremberg. The verre eglomisé armorial device held in the upraised claw provides no clue to the origin of the Mich(a)el cup. Little is known about this Augsburg goldsmith, though it is assumed that he became a master shortly before he married in 1608 and that he was little more than sixty years old when he died in 1640.

If both versions were genuine, it would be extremely difficult to state which of the two was made first. However, it is highly improbable that in the seventeenth century two contemporary goldsmiths, one in Augsburg and the other in Nuremberg, would slavishly copy the work of the other and send it to be assayed and marked. The question, therefore, is: which of the two versions is the modern copy or, if neither is convincingly old, then where is the prototype for these two essentially identical versions?

With only the opportunity to study photographs of the Munich version, the author is unable to make any comment about the age of that piece. Ideally, the Munich and London pieces should be examined side by side and the results analysed in detail, but in the meantime it may be pointed out that the four other known works by Jeremias Mich(a)el (listed in Seling 1980) are very different in character and quality - three ecclesiastical objects and (in London) a secular covered cup largely composed of twenty-six translucent enamelled plaques and panels supplied by the Augsburg workshop of David Altenstetter, who died in 1617 (see T. B. Schroder in ‘The Art of the European Goldsmith: silver from the Schroder Collection’, The American Federation of Arts, 1983, p. 118, no. 37, col. pl. on p. 116). The Munich version of the armorial cock cup seems (from the photographic evidence) to share in the following ways but to a lesser extent, some of the disquieting disfigurement of the surface that mars the London version:

(i) The presence of numerous small spots of silver (or silver solder?) in the feathers of the body, particularly near the seam (on the front). These spots have not taken the gilding and contrast with the gilt featherwork of the body.

(ii) The presence of rough, gritty, dark deposits within the lines defining the featherwork on the body. Again, these tiny, encrusted areas in the grooves and depressions have not taken the gilding and mar the effect of the feathering over many areas of the body and tail.

These surface problems, combined with the four-part division of the body and the poor quality of the exterior joins along the four principal seams, not only detract from the final appearance but indicate conclusively that a modern (nineteenth-century) reproductive method, perhaps an electro-forming process, was employed in the creation of this armorial cock cup. The result is a singularly heavy and insensitive piece of silver plate.

This cup should be compared with the famous cock cup of 1599 by Hans Petzolt of Nuremberg (master 1578, died 1633), which was commissioned by four leading patrician families of Nuremberg - Imhoff, Tucher, Scheurl and Paumgärtner - as a presentation piece of plate on the occasion of the consecration of the chapel in the castle belonging to Wilhelm Kress near Nuremberg; their four family coats-of-arms are engraved inside. The history of this 1599 cup was recorded in 1714 in the Kress Family Book, and the cock cup is now lent for public exhibition to the Germanisches Nationalmuseum in Nuremberg (see Wenzel Jamnitzer 1985, pp. 252-3, no. 69, with illus.). It is 26.5 cm high and has an entirely different quality, being both more naturalistic in all details and most expressive of that moment when the cock draws itself up to crow. It stands with both feet on an oval base decorated with a typical embossed representation of the ground (stones and grass), while the comb, wattles, beak and plumage of the tail are all rendered most convincingly. The superiority of Hans Petzolt's creation serves only to cast doubt on the Mich (a) el model that has been mechanically copied on at least one occasion and, in the case of the London version, given the spurious marks of Wolf Straub of Nuremberg. An authentic work by Wolf Straub, which has been

placed on loan by the Nuremberg City Council for public exhibition in the Germanisches Nationalmuseum, is the large pine-cone tankard (H. 17.7 cm) that Dr Klaus Pech-stein has dated 'um 1620' (see ‘Wenzel Jamnitzer und die Nürnberger Goldschmiedekunst 1500-1700’, exh. cat., Germanisches Nationalmuseum, Nuremberg, 1985, p. 281, no. 127, with illus.). The tankard is an expertly made object with a fine cast handle in the form of a herme. It is difficult to accept that Wolf Straub's workshop would produce two items of such contrasting quality and finish.