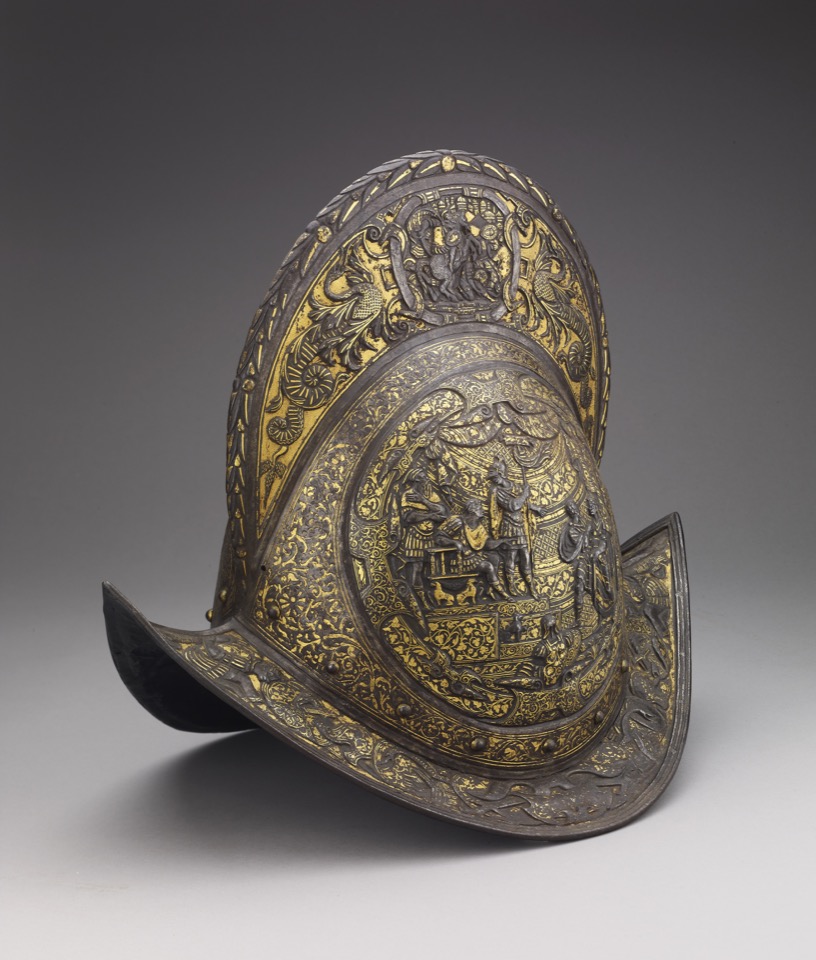 The helmet was intended for ceremonial wear and for display as a work of art, rather than for use in battle. It depicts scenes from ancient Rome with monstrous animals, combats and military trophies.

Iron morion; embossed, chased and inlaid with gold; on crest: combats of horsemen between pairs of monstrous animals; on each side of the body a Roman scene; trophies and figures on the brim.

London / The British Museum / Room 2A / Case 4a 21 Case 4b 17
This object sits in the centre of two cases, visible from both sides.

Commentary: This helmet was intended for ceremonial wear and display rather than for use in battle. It depicts classical scenes of Roman combat along with monstrous animals and military trophies. It was probably inherited by Baron Ferdinand Rothschild from his father’s collection, although the description in his father’s catalogue is too vague to be certain of this. Compare with morions in the Wallace Collection (inv. no. A120) and Paris Musée de l'Armée (inv. no. H/184).

'The next head-piece to which we shall refer - that beautiful morion which is the finest helmet of its kind with which we are acquainted - comes from Milan, and was bequeathed to the British Museum by the late Baron Ferdinand de Rothschild. Apart from its being a very find example of the work of Lucio Picinino at his very best period, it is the earliest helmet of the true morion order known to the author; in placing the period of its production in the closing years of the first half of the XVIth century we are in no danger of assigning it too early a date. It is splendidly solid in make, with a brim of sufficient size to balance its well-proportioned comb. In the enrichment of its surface can be seen that broadly executed embossing in low relief which denotes a period in the art of the late Renaissance in which the artist and the armourer still worked in harmony. A great similarity may be observed in the stle of this helmet and that of the fine shield in the Wallace Collection, no. 632 [no longer atrributed to Piccinino?] which, though unsigned, is acknowledged to be one of Picinino's most important works. The design may not actually be Picinino's, but the method of using the gold with which the surface is enriched is certainly his. The various patterns that decorate the drapery effects in the central tent scene on the shield and the principal panels on the skull-piece of the morion are particularly interesting as having been similarly treated. Here it will be seen that the various foliated scrollwork is first incised with a graver, the leaves, etc., being afterwards plated with gold, a method that lends a greater sense of richness to the general effect than if gold azziminia alone had been used. The greater proportion of the groundwork of the comb is thickly plated with gold. This gorgeous head-piece may well have had a great history; but, unfortunately, its past is unrecorded.'