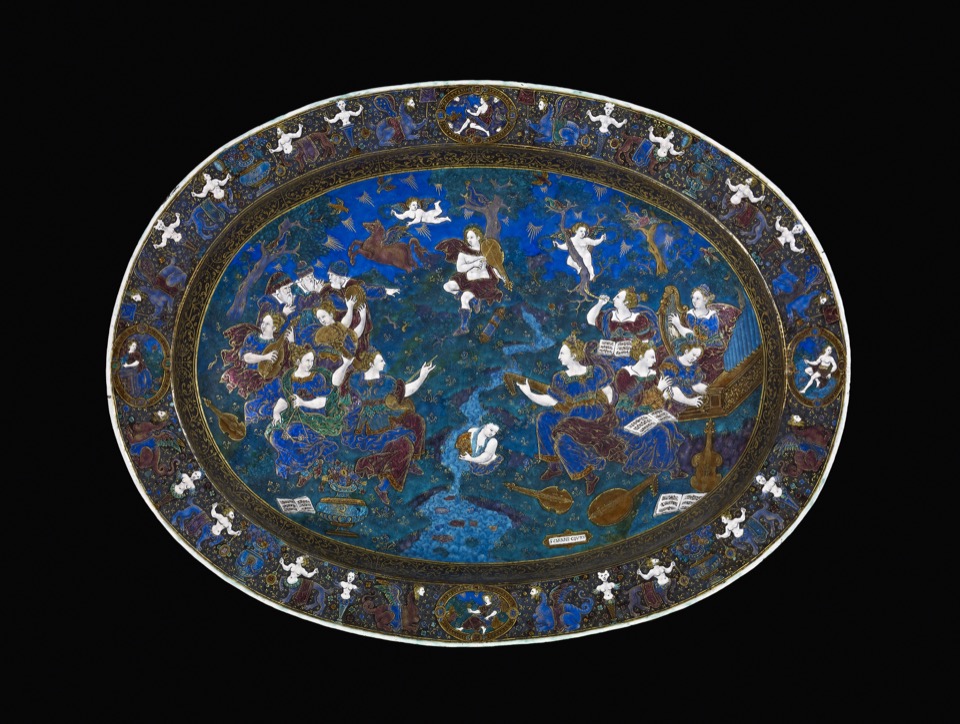 Apollo and the Muses

The design copies a print by Giorgio Ghisi of Mantua, maker of the Ghisi Shield in the Waddesdon Bequest. The Muses play musical instruments by a stream, accompanied by poets, cupids, Apollo and Pegasus. The pale flesh tints, rich turquoises and purples are typical of Susanne Court’s work.

Commentary: Text from Tait 1981: 'A striking example [of Limoges enamelwork] dating from the end of the sixteenth century is the magnificent large oval dish of Apollo on Mount Helicon, accompanied by the winged horse Pegasus and surrounded by the nine Muses. In the foreground of the composition is the prominent signature, SVANNE COVRT; however, this very competent Limoges enameller was not in the least responsible for the design, which is copied from an engraving by Giorgio Ghisi of Mantua, who in turn had based it on a drawing by Luca Penni, who had been inspired by Raphael's great fresco, 'Parnassus' (or Marcantonio Raimondi's engraved version of it), in the 'Stanza della Segnatura' in the Vatican Palace. The engraver, Giorgio Ghisi, was a gifted artist, whose brilliant skills in an allied field, the art of damascening, can be studied on the famous shield of 1554, which is preserved in the [Waddesdon] Bequest (WB.5). Subsequently, Ghisi's engraving of Apollo and the Muses was re-engraved in France by Gaspar ab Avibus (published 1563) and by Étienne Delaune; furthermore, several other enamellers at Limoges, including Jean de Court, the most distinguished member of the Court family, produced their own slightly varied adaptations.'

Four other dishes signed by Suzanne de Court have identical or near identical borders to this dish: one in the Lehman Collection in the Metropolitan Museum of the Conversion of St. Paul (inv. no. 1975.1.1233), one in the Louvre with the Meeting of David and Abigail (inv. no. MR 2410), and another also in the Louvre with the Wise and Foolish Virgins (inv. no. MR 2408), (another version of which is in the Musée de la Renaissance in Ecoen (inv. no. CI 21 966)), and one in the Walters Art Gallery of the Destruction of Pharaoh (inv. no. 44.308). See British Museum reg. no. V,8.118 for the Ghisi engraving on which the scene on WB.48 is based.