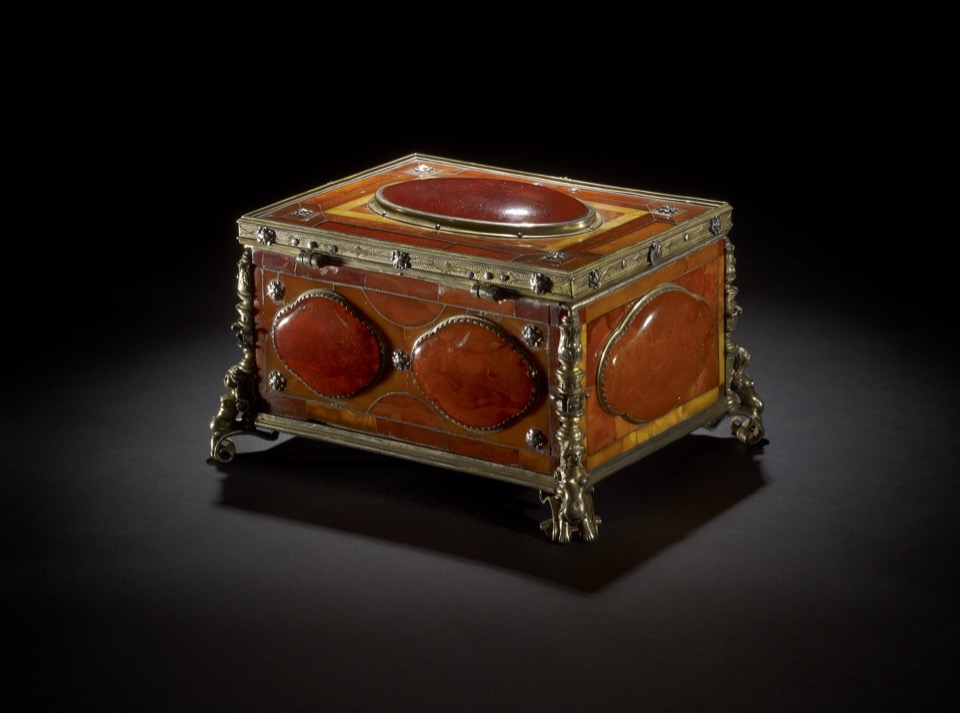 The casket is set with seven amber plaques. They are engraved on the reverse, in a similar way to rock crystal plaques, with female nudes lying in landscapes.

(iii) The remainder of the amber 'veneer': perhaps reused from a 17th-century casket originating in Königsberg or Danzig.

Commentary: In Read 1902, and again in Dalton 1927, this casket was stated to be “French, 17th century”. No doubt this attribution was due in part to the superficial appearance of the silver-gilt mounts. However, a close examination of the mounts reveals a number of details and technical features that are not consistent with a French origin in the late sixteenth or early seventeenth centuries. One may cite as inconsistent, for example, the engraved design of pointed diamonds around the silver-gilt mount on the four sides of the lid, the flaccid design of the strapwork (around the keyhole and on the front of the lid), the flimsy double-scroll feet, the curious triple 'plume' motif (applied midway) and, at the top, the 'pine-cone' capitals of the four corner half-columns. Indeed, the combined effect of these features with the decorative use of the floral rivet heads, silver inlay and scallop shells on a red-painted wooden box of modern appearance leaves little room to doubt that most of the casket is a recent creation.

The reason for its construction was, undoubtedly, to incorporate the remains of a genuine late sixteenth- or early seventeenth-century amber Schatzkammer object. The principal surviving elements were the seven intaglio amber plaques and, possibly, some of the amber 'veneers' that now cover the exterior surfaces of the casket. The six 'claw' mounts of silver-gilt may be original to those amber intaglio plaques, but it is significant that the plain oval mount for the plaque on the lid is distinctly different, both in its design and in its technical features - indeed, it might be no older than the nineteenth century. Furthermore, the intaglio engraving of the oval plaque, whilst very similar to the other six plaques, is different in one major respect: it incorporates a Renaissance scrolling frame into the oval composition. Whereas this feature may have been reserved by the carver for the most prominent plaque of the group, it may also be interpreted as an indication that this oval plaque originally belonged to a different group of plaques and was salvaged from a different casket (or similar object). In conclusion, none of these seven plaques betray any specific French characteristics, and until there is clear evidence of a French school of amber carving c. 1600 the former attribution of these plaques to a French workshop may be discounted, especially as the amber chalice of the Abbey Church of Saint-Denis, with its eight similar oval convex medallions (on the foot), is also attributed to Königsberg in the first half of the seventeenth century. This chalice with its silver-gilt mounts, struck with Paris marks for 1762-8 and an unidentified maker's mark, has no earlier recorded history (see D. Alcouffe in ‘Le trésor de Saint-Denis’, exh. cat., Musée du Louvre, Paris, forthcoming, 1991, no. 77).

In the Baltic workshops, however, there was a long-established tradition of working the clear amber in this manner, so that the intaglio subjects cut on the reverse would reflect the light as it shone into the thick amber -exactly in the manner of engraved rock-crystals of the Renaissance. The effect (with both materials) is an illusion of three-dimensional plasticity and depth. Occasionally the addition of a gold-coloured metal foil beneath the plaque would intensify the impression. Many specimens of this intaglio technique have been preserved, for example, in the Elector of Saxony's Schatzkammer (J. L. Sponsel, ‘Führer durch das Grüne Gewölbe’, Dresden, 1921, pp. 36-7; Alfred Rohde, ‘Bernstein: ein Deutscher Werkstoff’, Berlin, 1937, p. 66, figs 298-9; G. Weinholz, ‘Gefässe und Geräte aus Bernstein aus dem Grünen Gewölbe’, Dresden, n.d. but probably 1957, p. 42, figs 23-4). A similar example, a small cabinet, has recently been published as the product of an early eighteenth-century Baltic workshops, perhaps in Danzig (M. Trusted, ‘Catalogue of European Ambers in the Victoria and Albert Museum’, London, 1985, no. 18), but the intaglio plaques are all engraved in a very different, and demonstrably later, style than that of the seven Mannerist reclining female nudes in landscapes on the Waddesdon Bequest casket.

In Germany this Mannerist style was at its most popular around 1600 and can be seen, for example, expertly used to decorate two caskets in silver; both are by Matthäus Wallbaum (master goldsmith in Augsburg c. 1590, died 1632), and they have been preserved in the Munich Residenz Schatzkammer and the Waddesdon Bequest respectively (Hugh Tait, ‘Catalogue of the Waddesdon Bequest in the British Museum: Vol. II. The Silver Plate’, London, 1988, pp. 190-201, no. 37, figs 186-99). The amber intaglios are less sophisticated than the silver reliefs by Matthäus Wallbaum, and, indeed, the greater simplicity is more reminiscent of the intaglio rock-crystal oval plaques from the casket in the Escorial, which depict Mannerist reclining male and female emblematical figures in similar sketchily indicated landscapes (E. Kris, ‘Meister und Meisterwerke der Steinschneidekunst’, Vienna, 1929, pp. 182-3, figs 500-3, where they are attributed to the workshop of the Sarachi in Milan towards the end of the sixteenth century). Comparable intaglio work in amber might normally be attributed to Königsberg c.1600, but as such pieces are rare, they may be the work of a Court artist employed far from the Baltic but having access to a supply of unworked amber. After 1525, under Albrecht von Hohenzollern, Duke of Prussia, the export sales of amber to foreign merchants from towns as far away as Antwerp and Augsburg had grown so successfully that in 1533 Paul Jaski of Danzig was granted sole rights of distribution, on behalf of the Duke, to these merchants (Rohde 1937, p. 17). Consequently these seven intaglio plaques might be the products of a workshop in Augsburg, where the influence from North Italy was strongly felt and where, for example, the famous Pomeranian Kunstschrank (a kind of miniature Kunst-und-Wunder room) was being created over a period of seven years (1610-17) with the involvement of some twenty different craftsmen under the direction of Phillip Hainhofer, on behalf of Philipp, Duke of Pomerania; this tour de force by Matthäus Wallbaum (see Tjark Hausmann, Der Pommersche Kunstschrank, ‘Die Brandenburgisch-Preussische Kunstkammer’, Staatliche Museen Preussischer Kulturebesitz, Berlin, 1981) remained in Berlin until its destruction in 1944. Augsburg seems, therefore, a more convincing, albeit very tentative, attribution than an unknown centre in Italy, for which there is as little evidence as there is for the former French attribution. However, three amber reliefs of religious subjects have recently been attributed to Italy, possibly because they “probably derive from prints of Italian High Renaissance or Mannerist paintings” (M. Trusted, op. cit, 1985, pp. 84-9, nos 22-3).

amber plaques from dismantled objects is a large casket (L. 63.5 cm) in the Victoria and Albert Museum (M. Trusted, op. cit., 1985, pp. 82-3, no. 21, illus.; unfortunately, none of the intaglio engravings is visible in the photograph nor are they described in the text, but they are all attributed to the early eighteenth century). This casket, which has a wooden carcass, has almost as many ivory as amber panels applied to the exterior surfaces, but whereas the reassembly of amber on the Waddesdon Bequest casket is meticulously executed, all the many intaglio amber plaques on the Victoria and Albert Museum casket have been set with the carved surface uppermost. Instead of realising that each intaglio engraving is cut in reverse, the nineteenth-century restorer/dealer of this Victorian fabrication has incorporated these amber intaglios the wrong way round. As a result they are hardly visible except with a torch, and the purpose of the carving has been effectively negated whilst simultaneously making them extremely vulnerable to dust and damage.

The Waddesdon Bequest casket is, therefore, the work of a more sophisticated restorer, perhaps active in mid-nineteenth-century Paris and, in a subtle way, is reminiscent of a small square Kunstkammer casket in the Grünes Gewölbe, Dresden (inv. no. III 88 ii; see G. Weinholz, op. cit., p. 42, fig. 22, where the dimensions are said to be 12 x 9.5 x 4.5 cm and the sides and lid are composed of amber panels and strips with an octagonal amber plaque engraved with a landscape in the centre of each of the five surfaces). However, the Dresden casket, like the similar example in the Mecklenburgisches Schloss Landesmuseum, Schwerin (see Rohde 1937, p. 78, fig. 303), was not designed to be mounted in silver or any other metal, and consequently the misguided addition of the Renaissance-style mounts by the imaginative restorer of the Waddesdon casket detracts from his reconstruction, which, in other respects, has most sympathetically succeeded in 'rescuing' for the enjoyment of posterity the seven exceptional Mannerist intaglio plaques of amber.