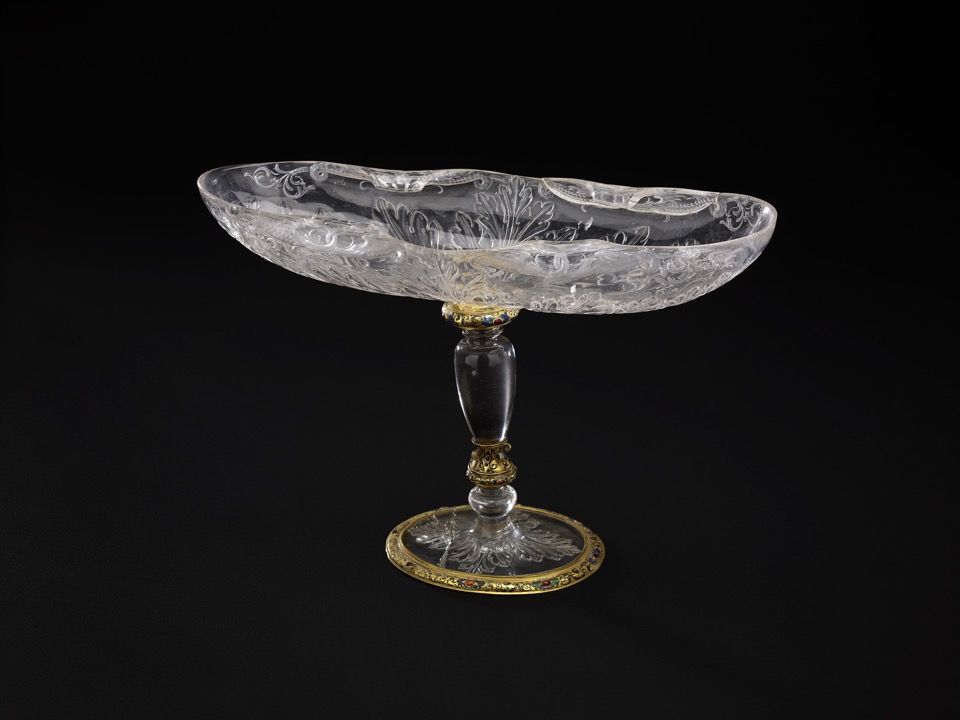 The cup is engraved with dragons with intertwined necks on the curving scrolls of the lip. The separately carved baluster stem shows off the purity of the rock crystal. It represents taste in Milan around 1550, in contrast to the austere geometric style of 1, which was made in Prague after 1600.

Commentary: Although the narrow, oval form of the bowl is exceptional, the style of the carving and engraving on this tazza is consistent with the best workshop standards practised in Italy, especially at Milan and Florence, during the second half of the sixteenth century.

The tall form of the clear rock-crystal baluster stem is to be found as early as the middle of the century on the famous rock-crystal cup - the so-called Diane de Poitiers Gup - which has a pierced French silver-gilt cover incorporating the ambiguous royal monogram HD or HC (for the French King, Henri II (died 1559) and his mistress, Diane de Poitiers, or, more probably, Henri II and his Queen, Catherine de' Medici) and which only returned to Florence as part of the dowry of Christine of Lorraine, who in 1589 was married to the Grand Duke Ferdinand I de' Medici (Museo degli Argenti, Florence: H. 23 cm; see Kirsten Aschengreen Piacenti, ‘Il Museo degli Argenti’, Milan, 1967, p. 135, no. 102; Kirsten Aschengreen Piacenti, ‘Capolavori del Museo degli Argenti’, Florence, 1969, p. 54, col. pl.; see also C. W. Fock, 'Vases en lapis-lazuli des Collections Médicéennes du seizième siècle, ‘Münchner Jahrbuch der bildenden Kunst’, Vol. XXVII, N.F., 1976, pp. 125-6, fig. 6; R. Distelberger, Beobachtungen zu den Steinschneidewerkstätten der Miseroni in Mailand und Prag, ‘Jahrbuch der Kunsthistorischen Sammlungen in Wien’, Vol. 74, 1978, pp. 79-152, fig. 60, where the Diane de Poitiers Cup is attributed to Gasparo Miseroni, who died in 1572-3). The three Italian enamelled gold mounts on the stem and foot of this historic piece are, both in their simple forms and their restrained decoration, comparable with those on the tazza in the Waddesdon Bequest. A similar simplicity of form is to be found in the stem of the rock-crystal cup of Albrecht V of Bavaria (1528-70), which is preserved in the Kunstkammer of the Dukes of Württemberg (see M. Landenberger, ‘Kleinodien aus dem Württembergischen Landesmuseum, Stuttgart’, Pfullingen, 1973, p. 29, with illus., where the height of the cup is stated to be 14.5 cm). The clear rock-crystal baluster stem and simple enamelled gold mounts support a rock-crystal bowl carved in the form of a deep shell with overlapping acanthus leaves at one end. Significantly, acanthus leaves are also prominently carved in relief on the Diane de Poiters Cup, where, indeed, they form a kind of calyx for the steep-sided circular bowl, with its very broad zone of Renaissance foliate scrolls below the rim. The effect of the acanthus leaf calyx is, therefore, not dissimilar to that achieved by the carver of the bowl of the Waddesdon Bequest tazza or, for example, of the bowl of the agate cup and cover carved in the Florentine Grand Ducal workshops towards the end of the sixteenth century and now preserved in the Museo degli Argenti at the Palazzo Pitti (see Piacenti 1967, no. 242; also Piacenti 1969, p. 70, with col. pl.). However, the delicately engraved decoration on the foot of the Diane de Poitiers Cup can be visually linked only with difficulty to the foliate scrolls on the bowl, whereas the boldly carved acanthus-leaf quatrefoil on the oval foot of the Waddesdon Bequest tazza plainly echoes the principal feature of the bowl's ornamentation and thereby establishes a strong sense of unity.

This visual link seems all the more necessary because the sophisticated form of the inward-curving, elongated oval bowl of the London tazza is unequivocally Mannerist - unlike the stem and foot. In addition, the eight engraved dragons with their entwined necks and elongated bodies are part of the repertoire of Mannerist ornament favoured by the workshops of leading artists like Annibale Fontana (born 1540 in Milan, died in 1587), whose 'Albertinische Kasten' of Albrecht V of Bavaria, made in Milan about 1560, is an outstanding example and is still preserved in the Munich Residenz (see E. Kris, ‘Meister und Meisterwerke de Steinschneidekunst in der Italienischen Renaissance’, Vienna, 1929, pp. 105-10, figs 471-9); also Hans Thoma and Walter Hege, ‘Kronen und Kleinodien’, Deutscher Kunstverlag, 1955, p. 28, pls 66-8). Furthermore, the unusual transformation of the tails of those dragons nearest to the two ends of the oval bowl into delicate foliate scrolls can be seen repeated with subtle variations on either side of the 'prow' of the boat-shaped bowl of the enamelled gold-mounted rock-crystal standing-cup in the Treasure of the Dauphin in the Prado, Madrid (see D. A. Iñiguez, ‘Catálogo de las Alhajas de Delfín’, Museo del Prado, Madrid, 1989, pp. 124-7, no. 78, with col. pl. and fig.; this nef (H. 20 cm) is attributed to the last third of the sixteenth century and has since been convincingly compared with the work of Annibale Fontana (died 1587) - for a full discussion, see R. Distelberger, Die Saracchi-Werkstatt und Annibale Fontana, ‘Jahrbuch der Kunsthistorischen Sammlungen in Wien’, Vol. 71, 1975, pp. 95-164, fig. 135, where the relevant engraved details are less clear in the older photograph). This form of small serpentine dragon is again a prominent feature of the engraved ornament of the zone above the acanthus-leaf calyx (in relief) on the tall rock-crystal jug (H. 31 cm) in the Rijksmuseum, Amsterdam (see Th. M. Duyvené de Wit-Klinkhammer, ‘Uit de Schatkamer I’, Amsterdam, 1967, fig. 16; also R. Distelberger, Beobachtungen zu den Steinschneidewerkstätten der Miseroni in Mailand und Prag, ‘Jahrbuch der Kunsthistorischen Sammlungen in Wien’, Vol. 74, 1978, pp. 79-152, fig. 75, where it is attributed to the “workshop of Gasparo Miseroni (?)”).

On a larger scale, the exceptional four-lobed rock-crystal dish with two handles (H. 7 cm) in the Rijksmuseum, Amsterdam, not only has a rim interrupted by four inwardly curving volutes, but above the circular foot the bowl is carved in relief with a calyx of acanthus leaves which are, furthermore, arranged in exactly the same fashion as on the foot of the Waddesdon Bequest tazza - that is, allowing four almost triangular clear spaces to remain between the acanthus leaves at the cardinal points (see Th. M. Duyvené de Wit-Klinkhammer, ‘Uit de Schatkamer I’, Amsterdam, 1967, figs 6-7, where it is described as “Italian, 2nd half of the 16th century”; also R. Distelberger, Beobachtungen zu den Steinschneidewerkstätten der Miseroni in Mailand und Prag, ‘Jahrbuch der Kunsthistorischen Sammlungen in Wien’, Vol. 74, 1978, pp. 74-152, figs 57-8, where it is attributed to Gasparo Miseroni, who died in 1572-3). Again, this evidence tends to support the former attribution of the mounted tazza in the Waddesdon Bequest to an Italian workshop. Although a precise dating for the London tazza (and its mounts) is still impossible, its form and decoration indicate that it was probably made towards the beginning of the last quarter of the sixteenth century, when the elegant tall tazza was most fashionable. No finer rock-crystal example has survived than the Schloss Ambras shell tazza (first recorded in 1596 and now preserved in the Kunsthistorisches Museum, Vienna; inv. no. 2268; L. 30.2 cm; see M. Leithe-Jasper and R. Distelberger, ‘Vienna: The Kunsthistorische Museum’, London, 1982, p. 89, where it is dated “circa 1560-70” and attributed to Gasparo Miseroni). The discreet, enamelled gold mounts do not obtrude upon the virtuosity of the carving, for they are confined to the stem and the foot -just as on the tazza in the Waddesdon Bequest.